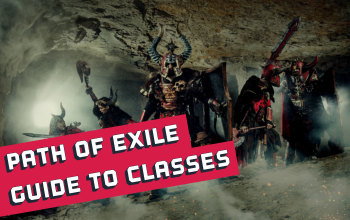 Beginner's Guide to Path of Exile Classes and Ascendencies

Detailed overview of all Path of Exile's Classes and Asendencies

Every player's adventure in PoE starts exactly the same - at the character creation screen. The choice of class is often regarded as extremely important, especially by new players who are custom to other action RPG titles. In PoE, this choice is a bit less important as skills are not class-specific and can be used by anyone (to a varying degree of success, of course).

*Ascendencies are special subclasses that grant access to character-specific Ascendency Skill Trees. You unlock your character's Ascendency Class (each Core Class, except Scion who has 1, has 3 Ascendancies to choose from) and its Ascendancy Skill Tree by completing the Labyrinth (a type of a randomly generated dungeon) for the first time; for the first completion, you will also get two Ascendancy skill points. The first three Labirynths are unlocked by simply progressing through the Story Acts (for a total of 6 Ascendancy skill points) and the final "Eternal Labirynth" can be unlocked in the end-game via special maps (these are used to create randomized instances). This means that each player character gets a total of 8 Ascendancy skill points to allocate on their specific tree.

We'll talk about the Ascendancy skill tree as well as the Passive Skill Tree on another occasion, now let's take a closer look at each of the 7 Core Classes and 19 Ascendancies:

Core Classes and their Ascendancies

Pictures used in this article are the intellectual property of  Grinding Gear Games.