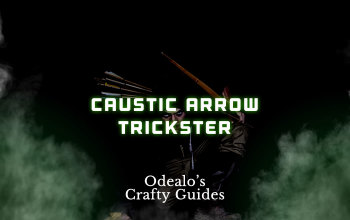 Try out one of the fastest Caustic Arrow builds out there. Our CA Trickster is capable of clearing all the content with proper investment

Caustic Arrow was reworked in Patch 3.4 and now it has increased Damage over Time, and additional initial Hit that also deals damage allowing Caustic Arrow to proc ailments and other on Hit effects (however, this build does not utilize it). Caustic Arrow has been one of the most popular Damage over Time skills, and with the recent changes, it can be also used in higher Tier content if you manage to get the right gear. While Caustic Arrow's DPS comes mainly from Gems and Passives, you can focus to squeeze as much defensive stats, Movement Speed and Magic-find attribute including Increased Item Rarity and Increased Item Quantity from all the other gear parts. This build focuses on maximizing defenses and Movement Speed bonuses by using Queen of the Forest and very high Evasion Rating gear while maintaining high Caustic Arrow's damage. We have also decided to use Trickster for this build, as it provides the highest Damage over Time bonuses, additional Frenzy Charges which grant higher bonuses, and very high Attack Speed bonus, which allows stacking Withered with Toxic Rain very fast.

Our Caustic Arrow Trickster build relies on high Damage over Time caused by Caustic clouds. On top of that, you use Toxic Rain with greatly increased Attack Speed and number of Projectiles to slow down enemies and apply the Withered debuff to them which increases Chaos Damage they take. Most of the enemies will die nearly instantly in the cloud allowing you to progress faster. On the defensive part, this build utilizes very high Evasion Rating, Dodge Chance and insane Movement Speed (approximately 200% with all the gear and Flasks enabled). Keep in mind that Caustic clouds don't stack, so there is no point spamming the skill against the same target.

Leveling your character for this Trickster build is very easy. Caustic Arrow is one of the first skills that you can pick up as a quest reward, allowing you to use the core skill early on. Same goes for Toxic Rain, which becomes a nice addition to your DPS as soon as you reach level 12. Also, Caustic Arrow does not require any specific unique items to be powerful, it does not cost much Mana either, allowing you to use pretty much any items you find during leveling. You should feel comfortable as long as you can get some Life and Resistances on gear, and Movement Speed on your boots.

Kill all the Bandits for two additional Passives Points

Major God: Soul of Solaris 6% Physical Damage Reduction if there is only one nearby Enemy, 20% chance to take 50% less Area Damage from Hits

Below you will find the recommended gear for your Caustic Arrow Trickster build. Since Caustic Arrow DPS comes from Gems and Passives mainly, most of the items can be replaced with pretty much anything (Rare Gear, Magic-find gear etc.). However, the items listed below will grant nearly 200% Movement Speed Bonus, 75% Chance to Evade, cap your Dodge Chance, and still maintain very high Caustic Arrow DoT Damage.

We would like to take this opportunity and invite you to join our PoE Marketplace where you can buy PoE Currency with real cash from other PoE players.