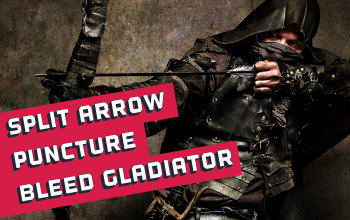 The Best and most popular Bleeding build in Path of Exile for Patch 3.16 based on the Gladiator Class

Split Arrow/Puncture is currently the best combination of Bleed Skills in Path of Exile. It offers very high single-target damage, but also insane clear with entire screens of monsters falling down to Split Arrow's Piercing projectiles. This build doesn't use Crimson Dance, as by maximizing the speed at which your Bleeding damage is dealt, it's nearly impossible to get to the 8 Stacks of Bleeding DoT anyway. This build offers insane clear speed with Bleeding enemies exploding on kill for 10% of their Maximum Life, which causes enemies to die instantly all over your screen. Gladiator is simply the best Class for this build, as it offers very high Bleeding damage bonuses, but also very high Movement and Attack Speed bonuses, with an additional Damage Mitigation from Endurance Charges and Outmatch and Outlast Passive. The build uses Assailum Unique Helmet - it forces its socketed Bow Skill Gem to be channeled, and at maximum stages, it increases the Bleeding DoT by 720%, and Hit Damage by 990%. This is where the Puncture Setup will be located - the Skill that causes the most Bleeding Damage.

This is a Ranged build based on Bleeding Damage over Time. However, with how fast your Bleeding DoT is applied to enemies, it feels like you would do all the damage with your initial Hits, making it a very enjoyable build to play. Split Arrow, thanks to Pierce and high base Physical DPS can take down entire screens of enemies within seconds, and Puncture is used to apply a much more potent Bleed effect against Bosses. You are also going to use Ensnaring Arrow with Ballista Totem to slow down enemies and increase the Projectile damage they take. For the defenses, you are going to have a decent Life Pool, high Armour Rating from Items and Iron Reflexes Passive, and high damage taken reduction from Endurance Charges, Outmatch and Outlast, and Soul of Steel Passives. For mobility, you can use Dash, which is apparently a faster Movement Skill than Blink Arrow because of the limited Attack Speed with Bows in this build.

Leveling with Bows is quite easy and fast. This is a Bleed build where most damage comes from Bleed DoT Multiplier sources that are not accessible on lower levels, so initially, you will focus on increasing your base Physical DPS (by upgrading your Bow and getting Items with Added Physical Damage to Attacks). Bleeding itself will be just an addition to your DPS on lower levels. You should be using the same Skills during leveling as later on, not only they are quite good for that purpose, but it will also help you master them while you are progressing through the campaign, and the transition into Maps should be very smooth then. Below you will find the basic Gem links for the leveling part, as well as, some very useful Unique Items that you can try to obtain to fasten the process.

We recommend killing all bandits for the additional 2 Passive Points

Below you will find all the recommended gear for our Split Arrow/Puncture Gladiator Bleed Build. This build has one specific Unique Item required - the Assailum, however, it's important to stack as much Physical Damage over Time Multipliers as possible, which kind of enforces you to follow up a predetermined route when equipping your character. While this build will work just fine with easily accessible Rares, if you want to have enough DoT DPS to take down end-game Bosses, some investments will be necessary.

Using this opportunity, we would like to invite you to visit our Path of Exile marketplace where you can buy PoE Currency with real cash from regular players.