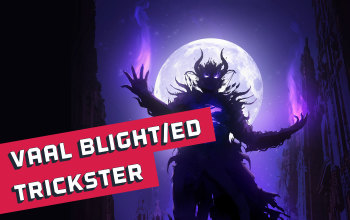 Blight is a channeling type of Spell similar to Scorching Ray or Lightning Tendrils, it deals Chaos Damage Over Time, gaining more stages the longer it is being Channeled. The Spell applies a debuff which deals the Damage over Time, much like Poison but it can stack up to 20 times. The spell itself does not Hit, so it limits our choice of Support Gems. Blight due to its Channeling nature is commonly used against the toughest opponents, for killing the lesser enemies you'll find in great numbers when mapping, use Essence Drain with Contagion. These two Spells synergize very well with each other - Essence Drain provides the Damage and Regenerates Life (ES with Zealoth's Oath) and Contagion makes both Spells spread to other enemies when one of them dies, basically killing everything on the screen.

The build is surprisingly similar to Toxic Rain - the mods you crave the most are Chaos Damage Over Time. There are however some key differences - Toxic Rain is an Attack, not a Spell. You'll be using Chaos Inoculation which grants you immunity to All Choas Damage. Ghost Dance and Escape Artist Ascendancy Kesyones work really well with Energy Shield and Blocking/Evading/Dodging Hits. Patient Reaper is another Defensive Keysone provided by Trickster Ascendancy - it recovers a lot of your Life and Mana. The build is Flexible - it requires no Unique items and even the Weapon types and Keystones differ from Player to Player.

In path 3.16 Damage over Time builds has received a buff by allowing players to allocate more points on their skill tree that improve this type of damage with more options to choose from. Base defense stats such as Evasion Rating and Energy Shield are elevated to a layer of defense equal to Maximum Life. Trickster being an Ascendancy that specializes in dealing Damage over Time while relying on Evasion Rating combined with Energy Shield is now in a much better state than he was before. Using Contagion and then Essence Drain with Blight was the most popular way to play Trickster back then, it was a cheap and powerful build that required no Uniques - now it will be even better than it was before.

When mapping - use Contagion and then Essence Drain on a pack of mobs. With the increased density of enemies, the effectiveness of this strategy goes up as well since the range it can spread is limited. The enemies will die almost instantly. To deal with Bosses use Blight and the Vaal version of it. Vaal Blight is especially good here since it doesn't require being Channeled and so allows you to be more mobile. For dodging - Flame Dash seems like the best option.

At some point during leveling, you'll have to switch to CI. Make sure you have enough ES on your items and then Respec Skill point on your Tree. You can safely start with Essence Drain as your Main Skill as soon as level 12 and use it with Contagion, it's good with the right gear. Before you're level 12, use Bane. There aren't many Unique items that can help you with leveling except the generic ones. I suggest using Essence of Envy on Jewellery for more Chaos Damage.

66 Points Skill Tree
This is what your Skill Tree could look like just before you transition to pure ES. Take some more Maximum Life and for a path to Zealoth's Oath.

There are some Unique Items worth recommending, for example, Atziri's Step, Crown of the Inward Eye, or Allelopathy. The price can vary from cheap to extremely pricey. With cheap gear, you'll be able to run red Maps with ease, but with the expensive one, it is quite likely to survive most hits on T16 maps with more than 10k ES. There are three stats to look for: Energy Shield, Elemental Resistances until capped, and Chaos Damage over Time (that includes Chaos Damage and Damage over Time). On items look for Strength and Dexterity.