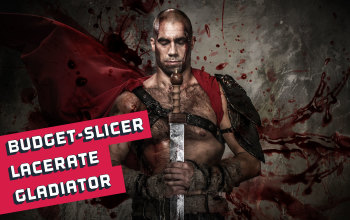 Gladiator is a typical sword & board type of character which offers very solid defenses regardless of your equipment. Thanks to Passive skills that increase your Block Chance, Gladiator is a perfect character to level up in new Leagues and/or play in the SSF mode. This build has very solid DPS and defenses, and with Melee changes introduced in Patch 3.7, it's a fully end-game viable build. For 3.17, we've decided to switch it to a mostly Bleed-based build, with no Implae mechanics implemented - it's able to reach over one million DPS with very basic gear this way. It's also moderately tanky, with over 5k of Maximum Life and high Block Chance.

We have decided to build this Gladiator on The Bringer of Rain, in order to drastically cut costs. A fully geared character that can clear Maps up to Tier 15 with ease will cost just a few Exalted Orbs, making it one of the cheapest builds for low and mid-tier farming. The Bringer of Rain is a unique Helmet that offers a 7-link setup for just a few Chaos Orbs but makes you unable to use Body Armour. With it missing, you lose a bunch of valuable defensive stats that are compensated by Gladiator's high chance to Block and Armour Rating. As for patch 3.17, we've decided to include the setups with a regular Helmet and Body Armour since it is in a way just a better version of the build that you can upgrade to later.

You can check our other Path of Exile builds right here

Lacerate Gladiator is a typical Melee character. It utilizes a one-handed Axe and Shield to slices through enemies. Lacerate attacks twice with your main-hand weapon creating two waves of force. Enemies right in front of you can be hit by both waves simultaneously, receiving full damage. Lacerate also deals more damage against bleeding targets. This build uses the Resolute Technique Passive, which saves you a lot of effort (and money) to reach enough Accuracy Rating on your gear to efficiently kill your enemies. While it is an insane damage buff up to mid-tier Maps, it limits your maximum possible DPS by making you unable to Critically Strike.

Leveling with Gladiator is a very easy task. You should have enough defenses just from following the recommended Passive Skill Trees and upgrading your gear with self-found stuff once in a while. Your main priority should be increasing your DPS output by upgrading the weapon (aim for one-handed Axes with the highest base Physical DPS) and getting equipment with flat Added Physical Damage to Attacks, and increases to Attack Speed. Below you will find several useful unique items that will greatly boost you during the leveling phase.

We recommend killing all the bandits for two additional Passive Points

23 Points Skill Tree
At this stage, the build is suited for any Attack Skill with a Shield and one-handed Weapon

Below you will find all the recommended items for this build. Keep in mind that this build is very straightforward and ALL the items listed below can be replaced with random Rares. If you decide not to use The Bringer of Rain just use a Body Armour that increases your Life and Elemental Resistance like Belly of the Beast (highest bonus Life), Carcass Jack (extra DPS), Daresso's Defiance (Onslaught buff), or similar.

If you have any other build requests please leave that in the comments below. We will appreciate any feedback or comments that can help us improve our guides for you!