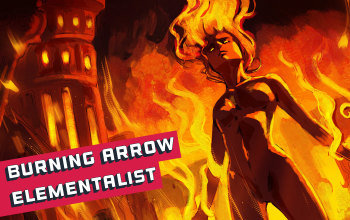 Elementalist became one of the most popular classes in Path of Exile with its recent rework. It's your primary choice for Ignite/Fire DoT builds, which makes it extremely easy to apply a spreading burning debuff on enemies with a 100% Chance to Ignite and increased damage. At the same time, scaling damage with Elementalist is very easy, as in most cases all you need to do is summon multiple Golems and benefit from greatly increased DPS and defensive bonuses from Passives and Elementalist's Ascendancy bonuses. Because of how easily you can scale your global damage and defenses, Elementalist is a very good choice for a League Starter build, and at the very same time, one of the most versatile and flexible ones. The aforementioned bonuses will apply to most of the builds you decide to play as an Elementalist character.

On top of being a great League Starter, this is also an amazing build that can perform very well on Red Maps. By increasing the DoT damage and the speed at which it's applied, you will deal Millions of DPS, allowing you to kill most of the enemies instantly. When you end up getting Xoph's Nurture, Dyadian Dawn, a few Blowback Passives from Cluster Jewels, all enemies you see on your screen will basically die the moment you fire your Arrow, which completely doesn't make it feel like your typical DoT build. This combined with Ignite Proliferation makes it an insanely fast Map farming build.

This is a Ranged/Bow build which utilizes Fire Damage over Time applied to "screens" of enemies with each hit thanks to the use of Ignite Proliferation Support Gem. Because of additional bonuses to how fast Ignite dealt is dealt to enemies through Dyadian Dawn and Blowback Passives, most of the DoT is applied nearly instantly, which feels like the enemies are dying from the Hits itself. For the most part, you will be just running/dashing around Maps firing arrows and entire screens of enemies will burn to death. You can also further amplify your damage by casting Wave of Conviction linked with Flammability Curse and Combustion for its' Fire Res. debuff. You can also benefit from Blood Rage, and generate extra Frenzy Charges for more damage multipliers, whereas, the self-damage it deals to your character is easily negated by the Life Regeneration offered by your Stone Golem.

Leveling this character is quite easy. You initially don't benefit from Golems and their massive bonuses, so you may have some Accuracy-related Issues, but luckily, that's during the easy part of the campaign. As soon as you get to Act 4, complete first Labirynth, and get Golem Commander Passive, the entire content becomes a piece of cake. The bonuses granted by Elementalist and (initially) three Golems are simply massive, and if you supplement it with some Unique Items to increase your Fire DoT, you will already feel how powerful this character can become. It's possible to level up using different Skills with similar effects, but we recommend sticking to Burning Arrow to learn the skill during lower levels and get into Maps with a solid dose of experience with it. Below you will find the basic Gem links for the campaign and some very useful Uniques that can be equipped early on.

Below you will find the recommended gear for our Burning Arrow Elementalist Build. We have primarily focused on the base stats that you want to find on your equipment so that you can easily start a new League using this guide. The number of extra "end-game" modifiers that can be used when playing higher Tier content like Sirius and Delirious Maps is just very high to list them all. Still, if you want to push this build to its limits and you have no idea how to proceed, let us know in the comments and we will be happy to assist you.

Most of the gear can be replaced with Random Rares, but it's strongly advised to obtain Xoph's Nurture as the BiS weapon which adds a 7th link to your main setup, extra Life Recovery, and decent base damage for DoT build.