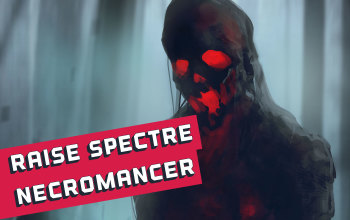 Raise Spectre is the best and the most popular Minion Spell in Patch 3.15. Check out our recommended setup for it

Patch 3.8 heavily focused on the Summoner/Necromancer build archetype which made it one of the most popular classes in the entire game, with most of the Summoners playing Raise Spectres. Raise Spectre is a Minion Spell that allows you to resurrect slain enemies to fight for you and Support Gem with Gems that benefit their abilities. It offers massive DPS and at the same time, it's budget-friendly and has no specific item requirements. With the recent changes, Spectre's logic has been greatly improved which makes increases your clear speed, and the damage is simply absurd with bigger investments in Minion equipment.

In the following Guide, we are presenting 6 different types of Spectres that can be used. Obviously, with each update, we are going to include several "best" Spectre types that are worth trying out with this build. There may be small differences in Support Gems and Auras used between them, but overall the entire build is basically the same. You are just going to deal damage through different types of Spectres with possibly different damage types. The build has been nerfed with Path 3.16. It no longer has Elemental Equilibrium, and Shotgunning with your Minions is no longer a thing - it was in fact way too powerful against single targets.

Spectre Summoner is somewhat similar to other summoner builds. Your main role is to Support your Minions with Auras, position yourself to avoid enemy Attacks to stay alive. The Spectres will obliterate anything on your Map within seconds, while your Animated Guardian and Carrion Golem provide valuable buffs to you and your team. Initially, we suggest using Slave Drivers as your Spectres, which have insane Lightning AoE Damage and are very easy to find. You can Summon them in Act's 5 Control Blocks, and since Patch 3.8, you no longer need to worry about the Corpse's level to do that as the Spectre level depends on your Raise Spectre Gem, not the Corpse level. This is the optimal Spectre for leveling and Starter builds, whereas you should "upgrade" to the other Spectres listed in the Skill Gem section as you progress through content and finding/obtaining them becomes easier.

The leveling phase with Spectre Summoner is very easy. You will be using Raise Zombies as Meat Shields and Summon Raging Spirits as your main DPS skill. There are no special item requirements for this phase, however, a +1 to socketed Gems wand is advised. You should socket your SRS setup in it. In general, a 3-4 linked Raging Spirit setup should carry you all the way to 28 when you can start using Spectres for an amazing DPS boost. Just try to summon any Spell Caster monster to aid you, and then when you reach Act 5, replace it with Slave Drivers.

The Spectre Summoner build is not only extremely powerful but also budget-friendly. As usual, we are providing all the recommended stats for each of the items listed. The items listed below will work for all the Spectres with the exception of two pairs of Unique Gloves that should be used under the specified conditions.

Also, remember that you can always visit our Path of Exile marketplace and restock any type of PoE Currency required to complete your build.