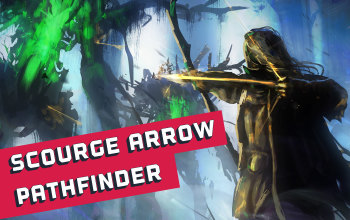 Patch 3.4 introduced new interesting Chaos/Bow skills - Scourge Arrow and Toxic Rain. At the same time, the Pathfinder class was redesigned, which now grants very high Poison and Chaos Damage bonuses from Attack skills, making it one of the most powerful DoT classes in Path of Exile. Pathfinders are also known for very good Flask sustainability which makes them more efficient in Boss fights.

The following build revolves around the Scourge Arrow Attack which is a channeled skill that when released fires a single projectile. While the projectile passes over the ground, pods are created that burst into tons of secondary projectiles that have increased damage based on the number of stacks accumulated while channeling. With each release, you will be applying multiple Poison stacks on enemies all around your screen, with the extra Poison "proliferation" from Pathfinder's Ascendancy, you will see enemies melt all over your screen after each Hit, and with high Attack Speed, this build will feel swift and mobile, even though you need to be stationary while charging your Scourge Arrow skill. On the other hand, this build offers quite solid defenses which are based on Life, Dodge, and Evasion, but can be further enhanced by Divine Flesh Passive. With high Chaos Resistance from Cluster Jewels, you can effectively reduce incoming Elemental Damage by approx. 20%, and with high combined chance to avoid damage from Attack Hits, you end up with quite a tanky character with deadly DOT at its disposal.

This Scourge Arrow Pathfinder is a ranged build where your main activity is Dashing into a relatively safe spot, putting down your Shrapnel Ballistas for extra DPS and Withered debuff, and then spamming Scourge Arrow to deal massive Poison Damage with it. The build is quite tanky, and thanks to the Arctic Armour you may be even able to tank enemies in better equipment, so just try out for yourself how much you can withstand. You can also load your Plague Bearer, which when activated will nearly instantly kill trash enemies all around you, allowing you to progress faster without having to stop and channel Scourge Arrow. In the optimal setup, most other Skills should be triggered automatically or applied automatically like your Curses via Hands of the High Templar.

Leveling this character is very easy. If you can afford a 4-linked Quill Rain that shouldn't cost more than 2 Chaos Orbs, it will be a smooth ride starting from level 5. Quill Rain provides the highest bonus Attack Speed in the entire game and the way it affects your overall DPS nullifies the damage reduction from the Bow. You can level up with several different Bow Attacks, but initially, the best ones are Caustic Arrow and Toxic Rain. One of the Skills should be linked to Mirage Archer (preferably Toxic Rain) while you occasionally also cast Caustic Arrow beneath your enemies to add a secondary Source of Chaos DOT effect.

Skills that are supposed to inflict Poison, like for example Scourge Arrow, will not deal enough damage initially, so it's better to stick to Toxic Rain/Caustic Arrow for the leveling part. All the Passives corresponding to those two Skill types are near to each other, so there won't be much respeccing required.

Below you will find all the recommended gear for this build. This build is relatively cheap and shouldn't include any expensive Items. The only mandatory Unique is Darkscorn, which is quite easy to obtain as just a handful of builds use it. It will work just fine with random Rares, but obviously, Items like Hand of the High Templar, Thread of Hope, Circle of Nostalgia, make this build so much more powerful and smoother to play. Luckily, you can gradually upgrade the equipment as you progress without any pressure.

Using this opportunity, we would like to invite you to join our PoE Marketplace where you can Buy/Sell and Trade PoE Currency with the use of real money. You can access that section on top of this page.