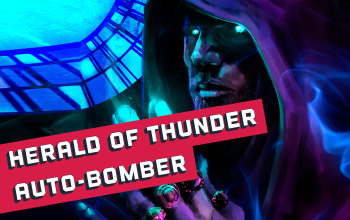 Auto-Bomber is a very specific type of build that utilizes Skills that are either triggered automatically or deal damage Passively. In practice, it should allow you to simply run through Maps without using any skills (obviously you will use some, otherwise you wouldn't be actually playing, would you?) while everything dies around you automatically. The following Herald of Thunder build is currently the best example of such a build that utilizes the Storm Secret Unique Rings that increase the frequency of Herald of Thunder's lightning strikes, and triggers them whenever you Shock an enemy. By increasing Herald of Thunder's damage, you basically can run around and kill most of the enemies with the HoT's Lightning Strikes itself. The mechanic itself is extremely fun to play, and with some investments in gear, you will be able to take down any Boss in the game. Overall, this build is quite expensive, as you need two Storm Secret Rings, and powerful Rare equipment to boost the damage of Herald of Thunder's Lightning strikes significantly - its base damage is rather low, so some investments is to be expected.

As for 3.17, the build still holds the title of being one of the best Herald of Thunder Skills, you can now use The Annihilating Light - a Staff that triples your Elemental Damage. Bury in mind that Herald of Thunder Damage is not affected by Spell Damage, so it's rather hard to find a good weapon. It also uses Crystallised Omniscience Amulet, which in exchange for the stats provided by the basic Attributes grants you Elemental Resistances and Elemental Resistances Penetration instead. The damage of the build comes from Calamitous Visions and Medium Cluster Jewels which can get you Notables such as Self-Fulfilling Prophecy, Dark Messenger, and Empowered Envoy. The build is very fragile, it doesn't have any good defensive layers, and in addition to that, you will be constantly hitting yourself with Storm Secrets.

This is a very fast-paced build which ultimately allows you to run through Maps obliterating everything without having to stop to cast Spells. The core mechanic is based on increasing the frequency of Herald of Thunder's Lightning strikes and creating Storms via Storm Secret Unique Rings. The Ring will also deal a moderate amount of Lightning Damage to your character, which will trigger additional Spells (Wave of Conviction, Shock Nova, Cold Snap) via a low-level Cast when Damage Taken. The Wave of Conviction applies Lightning Exposure, Shock Nova offers additional Shocks to trigger extra Storms, and Cold Snap creates Chilling Ground so that you gain the benefits of Algor Mortis Unique Gloves (it's optional). You also use Storm Brand solid additional damage and tons of Shocks procs, Orb of Storms to apply Curses (and also extra Shocks). All those Lighting Spells combined will trigger a lot of Lightning Damage from Herald of Thunder, dealing massive damage to enemies, but also to yourself. To mitigate it, a very strong defensive combination is used. This build utilizes both Life and Energy Shield (you should have approximately 4,000 of each) and offers both Life and Energy Shield Leech to quickly recover all the damage from Storm Secret Rings and enemy Hits. In order to make this even more efficient, you should use Glorious Vanity Unique Jewel, which should turn Mind over Matter or other Keystone into Corrupted Soul, which will make 50% of non-Chaos Damage bypass Energy Shield, so you should take around even damage to Life and Energy Shield simultaneously, allowing you to Leech both of them at the same time.

For leveling, you should use Storm Brand mainly. It's a fantastic Spell for clearing big packs of enemies, and it's one of the core Spells used in this build later on. You will be using Herald of Thunder as well, however, initially only to boost the damage of your Storm Brand. It still can deal some extra damage but with reduced frequency, it may not be worth focusing on entirely. Though if you have Calamitous Visions and the Lone Messenger, it's quite powerful even on lower levels.

We recommend killing all the Bandits for two additional Passive Points. You can also help Alira for extra Crit. Multiplier if your level is high enough to pick up all the core Passives and actually benefit from it

Below you will find the required and recommended equipment for our Herald of Thunder Auto-Bomber. Basically, all you need for this build to work is 1-2 Storm Secret Rings, but all the other recommended Uniques are what make this build not only exceptionally fast and fun to play, but also make it an all-content viable monster. Overall, this build is rather expensive, and it's not recommended to be built on a budget or a League Starter. If you still would love to try it out, you can always visit our Path of Exile Marketplace section where you can find cheap PoE Currency for sale for real money. It should help you out complete this or any other build you want to play.