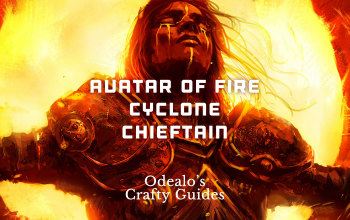 Cyclone is the most popular Melee Skill in Path of Exile. It deals high AoE damage and it's one of the smoothest and most beginner-friendly skills in the game. It's the spin-to-win skill of Path of Exile, which (for the most part) allows you to clear Maps just by pressing one button. We already made a bunch of different Cyclone builds, but this time we have decided to make a build based on 100% Physical to Fire Damage conversion granted by Avatar of Fire and the Chieftain class. Overall, this build is great as a League Starter and beginners, but with good equipment, you can scale its damage to some crazy levels. At the same time, you can stay very tanky as a Chieftain whose defenses are based on Life, Leech, and Armour. The following setup is not exactly built like a tank, instead, we have aimed at maximizing your DPS and clear speed, but you can expect to take some serious damage without dying.

This build uses Two-Handed Staves, which is just perfect for this Crit/Elemental Chieftain. You can also get an Elder Staff with Endurance Charge on Melee Stun which not only increases your Cyclone DPS directly but allows you to quickly generate Endurance Charges for extra defense - level 1 Fortify is also an option, which gives you an extra Support Gem.

This is a typical spin-to-win type of build where you can basically just use one button and breeze through Maps spinning with Cyclone. Trash enemies will quickly die from Herald of Ash's explosions, making it a true no-brainer in lower-level areas. When you need extra DPS you can summon your Ancestor Totems - you will be using both types for massive DPS bonuses. Their effect is increased by Chieftain's Ascendancy and Panopticon Passive. Thanks to the use of Multiple Totems Support, you can use both types simultaneously.

Chieftain is one of the easiest Melee Classes to level up. You get tons of DPS and Life bonuses available early on, so upgrading your equipment and getting more links is less relevant than for plenty of classes. We recommend leveling up with Staves - initially using Ground Slam and then switching to Cyclone, either at level 28 when it first becomes available, or at any later point, depending on your personal preferences. Ground Slam is one of the first attacks that can be used with Staves, and it deals solid AoE damage which is further increased against nearby enemies. Below you will find the base Gem setups for the campaign, and several extremely useful Unique Items that will help you complete it much faster.

We recommend killing all the Bandits for two additional Passive Points. Helping Alira for extra Crit. Multiplier and Resistances is also a good option

Below you will find the recommended gear for our Avatar of Fire Cyclone Chieftain build. This build is very easy to complete, as it has literally 0 specific Unique Items required. You can play it purely with Life/Physical Melee DPS Rares and a high base Physical DPS Staff. Obviously, if you want to benefit from Rage/Berserk, you will need to add Lethal Pride, but that's completely optional too.

Using this opportunity, we would love to invite you to visit our Path of Exile Marketplace where you can buy cheap PoE Currency in case you can't afford all the items for your character.