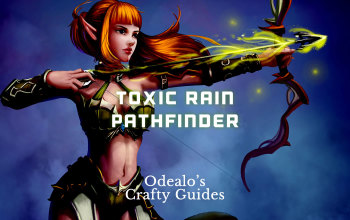 One of the best Ranged Starter builds in Path of Exile

Toxic Rain is one of the skills introduced in Patch 3.4. It is a Chaos/AoE Bow attack that shots several arrows in the air that fall dawn rapidly creating Spore Pods. Arrows deal damage when they hit enemies, Spores deal damage over time to nearby enemies, and after a short delay, they explode dealing Chas Damage in a small area. With Pathfinder's Ascendancy, your Poison deals greatly increased Damage and spread to nearby enemies, making it a deadly weapon even without any expensive items. Quill Rain which was one of the core items for this build has been nerfed in Patch 3.5, but Toxic Rain Pathfinder still remains a very good pick for a League Starter build. You can play this build with pretty much any set of random rares, and if players could kill Uber Elder with a level 5 weapon, you know that something is truly overpowered.

Toxic Rain received reasonable buffs recently it's among the best Starter builds to play in Echoes of the Atlas Expansion and Ritual League.

This is a typical Ranged build that relies on taking down your opponents from a distance as it shows limited defensive capabilities. It is based on high DoT damage dealt by Toxic Rain's clouds, which stacks and deals massive damage to enemies affected by several clouds. Primarily this build was oriented on stacking Poison with Toxic Rain, however, it appears that the Damage over Time effect is much more viable in terms of dealing with mid and high-Tier Map Bosses. This build provides decent defenses based on Life (over 5,000 with our low-budget items listed) and a high chance of Dodge Spells and Attacks.

Your primary objective should be getting Quill Rain after you reach level 5. Even a 4-linked one will do for most of the campaign. You should start your adventure with Caustic Arrow as it has no level requirement, and then add Toxic Rain at level 12. Caustic Arrow is best to be used initially to summon the Mirage Archer for some extra DoT, and then attacking enemies with Toxic Rain while it's up. Other than that, just focus on defensive gear and you should be more than fine throughout the entire process.

Below you will find all the recommended gear for this build. All the items are easy to obtain and should be relatively cheap. Also, this build is perfect for beginners and solo self-found mode. None of the items are mandatory and can be easily replaced by Rares.

Using this opportunity, we would like to invite you to visit our PoE Marketplace where you can buy cheap PoE Currency with real cash from other Path of Exile players.