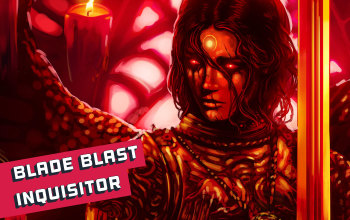 One of the most powerful Templar builds in the game

Blade Blast is an extremely powerful Physical/Area Spell that causes the lingering Blades you had previously left on the ground to explode dealing massive damage. The damage is increased for each Blade out there so you need to cast several Spells in a proper combination for the best burst. It may not be for everyone, as many players prefer "one button builds" but preparing the explosion with one or two casts of Bladefall is very rewarding. Blade Blast Inquisitor in terms of melting Bosses and giving tons of damage without any gear is in its' own League. Even with the small nerfs to Blade Blast's base damage doesn't affect this build that much, and you can't really go wrong with Blade Blast regardless of the class you decide to pick. It works exceptionally well with Inquisitor (our top Ascendancy recommendation), Chieftain, Assassin, Occultist, Elementalist, and possibly some others too.

As an Inquisitor, you benefit from a very high Critical Strike Chance, and the recently introduced Battlemage Passive, that grants you additional base Spell Damage to Spells based on your main-hand Weapon. Furthermore, by utilizing a Hybrid character with tons of effective Life/Energy Shield with dual Leech and Regeneration. You can take damage as no other build currently. Corrupted Soul got some nerfs this League as well, but that shouldn't affect this build that much either.

This is a very powerful Spell Caster build which relies on casting Bladefall and Blade Blast in a sequence to create the optimal amount of lingering Blades with the first of the Spells and have them detonate with Blade Blast for massive burst damage. This build is pretty straightforward, and with the recommended end-game gear you will be able to just stand in front of the Bosses and cast your primary Spells without having to worry about the damage taken. Trust us, the Boss will go down much faster than you.

You are also going to use several interesting Utility Spells which include Frost Shield - to grant extra flat. Crit. Chance and some extra protection, Arcanist's Brand to apply your Curse and apply. You are also going to use Battlemage Passive, which adds high damage to your Spells if you equip Vulconus in your main hand. You could possibly also find some very high Elemental DPS one-handed weapons, but Vulconus also adds Physical to Fire Conversion which is a must-have in this build.

Leveling up as a Templar is easy but requires some extra setups. You shouldn't level up by self-casting both Blade Blade and Bladefall as it will be simply too slow in inconvenient to use because of very low Cast Speed and basically much lower damage during the campaign. It's a good idea to socket both of them to Spellslinger Support so that they are triggered automatically when you attack with a Wand - preferably with Frenzy for extra Frenzy Charges or Power Siphon for extra Power Charges (both increase your damage, so that's up to your personal preference). You could also try leveling with Poet's Pen with will deal some decent base DPS that scales with your level, but also trigger linked Spells without Mana Reservation cost. Below you will find the recommended Skill gems set up for the lower levels and several extremely useful Uniques that will help you complete the campaign much faster.

In this section, you will find the recommended Items for our Blade Blast Inquisitor Templar build. This build should be quite easy to set up as it doesn't require any specific expensive Uniques, and the ones listed should be relatively easy to obtain. Most of the gear can be replaced with random Rares anyway.

If you have any feedback about this build or suggestions for the next one, please let us know in the comments below! We are always glad to make all kinds of build guides, from end-game monsters to beginner-friendly and budget builds just as this Blade Blast Inquisitor!