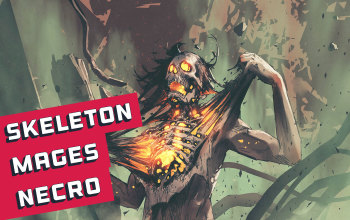 Summon Skeletons is a very popular Minion Skill Gem due to how versatile it is. For example, Skeletons can be turned into Skeleton Mages by putting Dead Reckoning Unique Cobalt Jewel in the right spot on your Skill Tree - and this is the gist of this guide. You'll be able to have up to 15 Skeleton Mages, but capable of summoning up to ten or eleven with the non-Vaal version of this Skill Gem. The difference between the default Skeleton Warriors and Mages is that Mages shoot projectiles at the enemies from a distance. Their Projectiles are of three types - Fire, Cold, and Lightning and they are randomly assigned, so you won't have much control over which of the Skeleton Mage you'll spawn, and what damage type he will be dealing.

It is mandatory to use the Vaal version of Summon Skeletons, the minions summoned by this gem won't be all Skeleton Mages but the sheer amount of them will overwhelm bosses. Combined with Life from Death Notable from Cluster Jewel it will also keep your other Skeletons alive as the ones in the front line die. The obvious advantage of Skeleton Mages is that they are ranged, not melee. It makes them more responsive to enemies, for they don't need to approach them. It's a standard Necromancer build, you pick some Minion nodes from a Skill Tree and you try to increase their life and damage. Your main layer of defense will be your Life pool and Block Chance; it's important to look for Maximum Life on your Skill Tree as well as Gear. Other Minions that will be used are Zombies, Spectres, and Skitterbots.

With a considerable defense in the form of a meat shield formed by your Specters and Zombies, you should be quite untouchable. Use Flame Dash for dodging and have a Guard Spell - Immortal Call to be cast automatically by linking it with Cast When Damage Taken. Your Maximum Life should be at least 5k. Roam the Maps by spawning Skeletons ahead of you. Zombies will attack opponents that will appear on your screen tearing any enemy that's able to come too close to you. For Boss fights and on encounters such as Breach or Legion, use Vaal Summon Skeletons. It quadruples the number of skeletons you normally have hurting enemies as well as increasing your performance.

You can comfortably complete the acts using your Summon Skeletons, but the best result wields Absolution. It's a Spell that summons a special Skeleton if you kill someone with it. You have to be level 12 to equip it, before that you can use any other Spell. You'll invest in Minion-related nodes in your tree from the start. Use Spirit Offering to increase Minions' Damage. Get the Dead Reckoning Jewel as soon as you can so you'll have more time to get used to this alternate playstyle and start using it after quipping Fleshcrafter - no sooner than level 59. There are Unique Items that will help you during the leveling process, most of them are listed below. In general, you shouldn't have any problems with leveling, it is not an elaborate build that requires switching skills or respeccing points.

35 Points Skill Tree
Take Lord of The Dead and Enduring Bond. Go for Discipline and Training and the large Minion Cluster on the left.

Your Weapon, Shield, Helmet, and Jewellery will consist of Rare Items. You'll need to seek as much Life, Elemental Resistances, Minion Damage, and Attributes as you can. Sniper's Mark and Projectile Support Gems will require a decent investment in Dexterity and Your Convoking Want will require a lot of Intelligence to wield. Mandatory Uniques are not that expensive, the more significant portion of your budget will go towards Rare gear, especially Wand and Helmet.