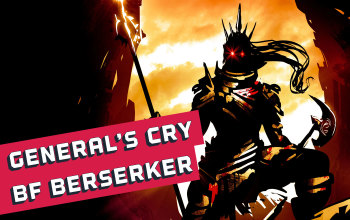 General's Cry is a Warcry Gem with very unique properties. It's a Warcry that makes it feel more like would be playing a Minion build as it creates multiple Mirage Warriors from nearby corpses that will cast a Melee Attack linked to it. While you would normally treat Warcry as an extra secondary skill that slightly buffs you, in this build it's your primary damage-dealer, with tons of AoE damage and simply massive single-target damage.

The best description of this type of build could be "meme but strong" which just happens to be how someone described this type of build on Path of Exile's Reddit. And that just happens to be exactly the case here. By reducing your Warcries cooldown and automatically creating corpses around you with Desecrate, you will deal simply absurd damage without any exceptionally expensive equipment.

This is a very unique type of build that feels like a Melee build but is quite far away from it. You are going to mainly spin around with Cyclone, but its main goal is to buff you with Fortify, Infusion, and to create corpses by triggering Desecrate thanks to the linked Cast while Channelling Gem. While spinning, you are going to spam General's Cry (which happens to be an instant-cast Spell that doesn't stop your Cyclone) with a greatly reduced cooldown. Mirage Warriors from nearby corpses will be summoned to deal insane damage with Blade Flurry. In terms of raw damage, Blade Flurry is the best ability for this build, as it not only hits once like most of the attacks but instead will be channeled up until 6 stacks and released for high damage burst. You can also try this out with any other Melee Attack, and in most cases, this build is pure fun. You can try Charged Dash or Flicker Strike which also works just fine and doesn't require you to switch anything in the recommended Passives/equipment. By using Redblade Banner (which is kind of a must-have item here) and War Bringer Passive, you will basically generate 50 Rage with each Warcry, and deal 50% More Damage with General's Cry supported Attacks. Rage generated with War Bringer will also allow you to keep up the Berserk buff for a significant duration, for massive DPS bonuses.

We recommend leveling up with a standard Melee character that uses one-handed Swords and Cleave to deal decent AoE Damage (you can also use Blade Flurry, Cyclone, Sunder with Axe, or any other Melee Attack you feel comfortable leveling with). Whether you use Shield (better defenses) or dual-wield (more DPS) is entirely up to you, just make sure to skip Shield-related nodes if you decide to go the second way. It's also a good idea to make a secondary Vaal Double Strike setup for extra burst against Bosses. Other than that, just make sure to upgrade your Physical DPS on weapons, and get Life and Resistances on your equipment. Below you will find the base Gem setups for the leveling phase and several extremely useful Uniques you can use for it. Assuming you are not starting up on a new League, all of the Items should be very easy to acquire. It's also recommended to get Redblade Banner at level 35, as soon as it becomes available for your character.

We recommend killing all the Bandits for two additional Passive Points. You can also choose to help Alira for extra Crit. Multiplier, though this build is not purely Crit-based without very expensive gear

Soul of Solaris 6% Physical Damage Reduction if there is only one nearby Enemy; 20% chance to take 50%  less Area Damage from Hits

Below you will find the recommended items for our General's Cry Blade Flurry Berserker Build. This build can be played with any random rare equipment, however, using Redblade Banner is heavily recommended. Also, Paradoxica with high increased Physical Damage/Impale/Bloodrage appears to be the best possible weapon for this setup and it shouldn't cost a fortune either.