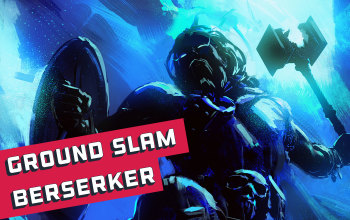 Patch 3.14 and the Ultimatum League introduced a new very interesting pair of Gloves - Hateforge. That pair of Gloves allows the player to use Vaal Attack Skill by paying their Rage cost instead of accumulated Souls. Proper Berserker setup with War Bringer and multiple Warcries with greatly reduced Speed and Cooldowns, allow you to quickly generate Rage and nearly spam the Vaal Ground Slam.

This build's final form requires Hateforge - currently the single-most expensive Unique in the game. Because of how strong the Item is, it currently costs over 300 Exalted Orbs. Rest assured, this build is fully viable as a standard Melee build with Ground Slam and a pair of regular Gloves. It will be "just" a regular Melee build with tons of DPS, solid defenses, and great AoE - the only difference lies in how often you will be able to Attack using your Vaal Ground Slam.

Why Ground Slam? The answer is quite simple. First of all, it's the Attack with the shortest Soul Gain Prevention Time of 1 second - which means the Vaal Skill can be used at the highest possible frequency. It also is the only Attack in the entire game that can be Exerted by Warcries. At the same time it has high DPS, good AoE, and greatly increased damage to nearby enemies. You will often see Bosses get one-shotted if you buff yourself up before the encounter.

From the playstyle perspective, this is a standard Melee/Slam build. You are going to spam Warcries to Exert your Attacks and Hit the ground with your Ground Slam to create devastating fissures that hit enemies in a cone in front of your character. This build deals purely Physical Damage and benefits from Impale mechanic and increased Critical Strike Chance. This build, in its base form, is already an exceptionally strong Melee build with very solid defenses from very high Life and Armour Rating. Top it up with the Hateforge Gloves, and you end up nearly endlessly spamming one of the deadliest Melee Attacks in the game with a greatly increased radius. It's a perfect build for the Ultimatum encounters, as with a single Hit you will instantly kill most of the enemies on your screen.

You are going to level up using Ground Slam as your primary DPS skill from level one. You can grab a cheap Level 1 / Quality 20 for a couple of Chaos Orbs early on, and save the "Vaal" stacks for tougher enemies and Bosses.

Major God: Soul of Arakaali for 5% reduced Damage taken from Damage Over Time; 10% chance to Avoid Lightning Damage from Hits

Since Chaos Damage can hurt you a lot - at least in our case, the Chaos Resistance was quite low - so we have decided to pick two of the Gods that reduce the DoT and Chaos Damage slightly

Below you will find the recommended gear for this build. While this build primarily focuses on Hateforge Gloves and spamming your Vaal Ground Slam, it's also a fully viable Melee build without it - you are just not going to be able to use it as often and consistently, but you can still benefit from this Berserker's durability and massive AoE Damage. This build utilizes several Unique Items, out of which, most should be easily accessible and relatively inexpensive, whereas, all of them can be replaced with random Rares that boost your required stats.