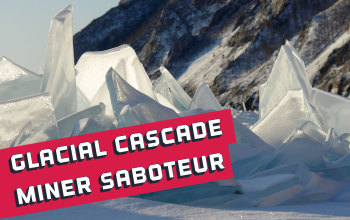 Very powerful and fun to play Saboteur build for Path of Exile. One of the best League Starter builds in the game

Glacial Cascade Spell is a Spell that creates several ice cascades in front of the player that shatters nearly instantly to deal area damage. It has a very similar effect to the Ice Crash melee attack. Glacial Cascade is a Physical Spell with 100% of its damage converted to Cold. With the current upgrades to Saboteur Class and Miner archetype, it's becoming one of the best and most popular Starter builds in the game. At the same time, this build offers solid defenses based on Dodge, Life Regeneration, and Wind Dancer (as of the newest 3.17 version).

For the full list of our Path of Exile builds you can visit the following article: Odealo's Crafty Guides - Full List

The idea behind Remote Miner builds is to plan Mines that cast linked Spells when detonated. Shadow Tree has a lot of major Mine nodes, and the entire Saboteur Ascendancy Class is built towards Mines and Trap damage. This provides extremely fun to play gameplay mechanics while allowing amazing damage with not much currency investments - most of the damage comes from the Skill tree, Ascendancy Points, and inexpensive Tremor Rod unique staff. We have also received Skitterbots in Patch 3.8 which detonates your Mines and increases your Mine Damage.

The leveling phase with a Miner build is rather easy. You can start any Spell available early on (for example Ethereal Knives) and use Fire Traps for some additional damage during your first levels. At level 8 you can get the Remote Mine Support gem and link it to the Spell chosen. This will greatly increase the damage, and you should be able to boost it even further by taking the Saboteur node a couple of levels later. From this point onward getting to level 28 when you can start using Glacial Cascade should be a piece of cake. After you reach level 40, it's advised to get the Tremor Rod. You can start off by using as low as 3 or 4 links on it; it will still be more than enough to carry you to Act 10.

Our Glacial Cascade Miner is a League Starter build which makes it very budget-friendly. Tremor Rod is the only required unique that doesn't cost much if you want to start off with just three or four links on it (when you reach level 40 it is more than enough). This build also has many other variations (both Budget and end-game ones) which include, among others, a Low-Life build and Wand + Shield version. Let us know if you would like to have another version added here as well!

Using this opportunity, we would like to invite you to visit our PoE Currency Marketplace where you can buy cheap Orbs from other Path of Exile players. Links to the Market section can be found at the top of this page.

The recommended items will: