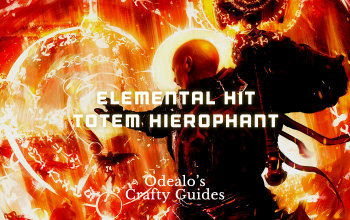 Check out one of the most powerful Ballist Totem builds for Patch 3.13

Totems and Ballistas are one of the things that were addressed in the most recent 3.13 Patch. Both Ballista Support Gem and Hierophant's Passives related to Totem playstyle were buffed. That makes it a perfect time to try out this type of build, and Elemental Hit Ballista/Totem is among the best ones out there. This build relies solely on the Fire Elemental Attack, and damage conversion from Cold to Fire and Avatar of Fire Passive, which lets you greatly scale your Damage with Elemental Hit. It also can be treated as a low-budget build, as none of the core Items are really that expensive. Your six links (Quill Rain) should be less than 1 Exalted Orb, and Kaom's Heart and Frostferno cost like 15 Chaos each. All the other equipment is cheap and easy to obtain. Not to mention, pretty much all of the Items except for the Helmet and Combat Focus Jewels can be replaced with random rares. The only thing that doesn't make it one of the best Starter builds out there, is the necessity to obtain those Jewels in the first place, which may not be that easy first day of the new League. Still, this is one of the most-budget friendly builds out there, offering massive DPS, great clear speed, and reasonable Dodge-based defenses. You can easily farm the majority of Bosses using this build even on a few Exalted Orb budget.

This is yet another typical Totem build, where you plant all the Totems you have available and wait for them to finish off your enemy. In most cases, this will be accomplished with the very first hit, so you can progress quite fast using it. You will be using Point Blank so it's a good idea to place your Totem as close to the enemy as possible (mainly Bosses, most of the other stuff won't even stay alive long enough to make it matter). You will be also using Blood Rage and Sniper's Mark to increase your DPS, and a mobility skill of choice (Dash is recommended). Another interesting mechanic is the use of Lethal Pride Timeless Jewel which will make you generate Rage. And since you won't be hitting anything yourself, you are not going to lose it, so you can keep quite insane uptime on the Berserk Spell, which boosts all your stats significantly. For the defenses, this build offers decent Life and Dodge and uses Wind Dancer Passive. As you don't really need to directly face enemies yourself, this build feels very smooth and easy to play.

We didn't include it in the following guide, but it also might be a good idea to get extra pierce if you are looking to maximize your clear speed (there is a small node with it just below Acrobatics).  You would have to skip some of the other Passives though (like the Cluster Jewel ones) or get a higher level than we did to allocate it.

For the leveling phase, you should be using the same skill as in the end-game; Elemental Totem Ballistas. Initially just use anything for the first few levels before this combination is accessible at level 12. You can use Freezing Pulse, Split Arrow, or even a regular Melee Attack - basically anything that you can use with your current weapon. It shouldn't matter initially. You are aiming to get to the Ancestral Bond as soon as possible, which will allow you to use extra Totem Ballistas, and then you will be forced to go all the way down through the Marauder/Duelist zones to the Bow nodes on the bottom right of the Tree. It's the point where things can get a little bit tricky, and you may be lacking some DPS without proper gear.  Below you will find some basic leveling setups and several extremely useful Uniques that will help you get through the campaign with ease.  You can also use Lightning Spire Trap or any other form or Trap/Mine to deal some extra damage, as your self-cast Spells and Attacks won't deal any damage with Ancestral Bond allocated

Below you will find the recommended gear for our Elemental Hit Ballist Totem Hierophant build. Most of the items below are quite cheap and easy to obtain (not for SSF players though) making it an extremely powerful Starter build. You can easily deal with all of the content on just a few Exalted Orbs budget, making it one of the most effective builds we played in 3.13 so far, so if you wanted to play a Totem build at some point - now it's the perfect opportunity! We would also like to grab ours (opportunity, that is) and invite you to visit our Path of Exile marketplace where you can buy cheap Currency and Orbs from regular players with the use of real cash. Links to that section can be found on the top and right of this guide.