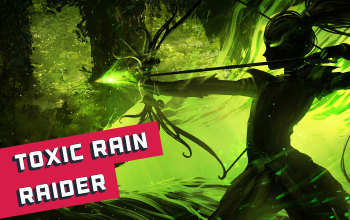 Toxic Rain Build for Raider Ascendancy, a beginner-friendly build with a lot of end-game potential

Toxic Rain is a unique Skill - It's an attack that has three stages - the initial impact of the arrow, the damage dealt by the spore pod it created, and the spore pod explosion. Spore pods are created when an arrow lands on the ground and it is what most of the builds expand on. It then creates a toxic ground after it explodes that deals Chaos Damage Over Time. The damage from the pods can stack one on top of the other, it means that more arrows equal more spore pods equals more Damage Over Time, even if it overlaps. It's a good idea to invest in Attack Speed and Additional Arrows, but your primary focus should be on increasing Chaos Damage Over Time and Gem Level. Bury in mind that you'll not rely on Poison at all, Poison - although can be described as Choas Damage Over Time - it's not what you'll be utilizing.

The build is simple and inexpensive - it's a good league starter and a great build if you're new to the game in general. You'll need to look for Maximum Life, Increased Skill Effect Duration, and Chaos Damage Over Time on the Skill Tree. Since Toxic Rain allows you to increase your Damage Over Time by increasing Projectile Damage, feel free to invest in your Projectile Damage as well. Your defense will rely on Maximum Life - around 5 or 6k, Evasion Rating - around 30 to 40k, and Ascendancy points. Your Chance to Evade hits should be really high. It is recommended to anoint your Amulet with Corruption for the increased effect of Withered. Thanks to your Ascendancy, you'll have a permanent Onslaught. The build requires no uniques, but few are recommended.

The gameplay is simple - use your Toxic Rain as you run around the map. It's The only DPS Skill in the build and it does more damage the longer you're standing on the ground and attacking - it allows for more spore pods to be created. The cure of your choice is Despair - you'll need to find a Ring that can inflict this specific Curse on hit. For more vital opponents it's recommended to have them withered - use Ballist Totems that will apply Wither for you while you attack the enemies. You actually don't need your Body Armour to be 6-linked, only your Bow, it should have local Gem Level modifiers. Since there are not a lot of Damage Over Time modifiers on a Skill Tree, or at least not that many as you'd like, use two Large Cluster Jewels and Four Medium ones.

Pick Caustic Arrow as a reward for killing Hillock. Later in the same act, you'll be able to use Toxic Rain and there is no reason not to do it. You'll start by picking generic Bow passive nodes from the Skill Tree while keeping your defenses high. Going through acts should be an easy process. If you lack Mana even if your flasks are updated for your level - use Clarity. Use mostly Rare items for leveling, you can slam Essence of Envy onto your gear if you have any.

The build relies on Rare items to provide you with damage and defenses. Your Priority as always should be capping your Elemental Resistances. Some versions of the builds use Eternal Youth Keystone from Glorious Vanity Timeless Jewel for Life Regeneration since your chance to Evade and Dodge Hits is so high, however, this build does not have it - by having two large Cluster Jewels you're already tight on Skill Points. Generally, look for Chaos Damage Over Time on your gear. Try to get somewhere at season one mod with Mana Leech.