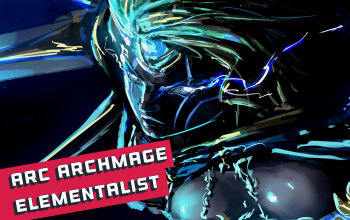 Patch 3.17 reinvigorated self-casters, Spell Hits deals now more damage and there are new Cast Speed modifiers. This build explores the Elementalis version of a self-cast Arc - more specifically a Golemancer. With four or five Golems and the increased effect of Buffs they grant it's safe to assume this is one of the most viable builds based on that ascendancy in the current version of the game. Arc is great for clearing, but due to the nature of the build, it can be swapped for any Lightning Spell, for example, a Ball Lightning. It's a Life build that uses Life and some Energy Shield that inevitably is gathered from Items and Intelligence. With a Staff, you also have some Block Chance that you can later expand on.

Golem's Buffs increases your offense and defense. Each of the summoned Golems will grant you Increased Damage, Cast Speed, Physical Damage Reduction, Critical Strike Chance, and Life Regeneration. You can Summon all the Golems thanks to your Ascendancy, Golem Commander Notable, and The Anima Stone (which is expensive and optional). The best part of it is that you won't need to resummon them after they die, they'll do it automatically after 4 seconds, so it's comparable to how Auras works - you just don't need to reserve Mana. Your Golem's Skill Gems should be of Anomalous Quality as you need them only for their powerful buffs.

The Skill of your choice is Arc - it's excellent for clearing maps, you just need to aim in the general direction of an enemy and it clears the whole screen. Arc linked with generic Spell Support Gems will be used to kill bosses as well as small games. Using a Staff brings you the advantage of another 6-link. It's where you can put your Orb of Storms granting you miscellaneous buffs. For passive skills use Auras like Wrath, Zealotry, Herald of Thunder, and various Golems. Flame Dash or Lightning Warp can be used as a mobility tool, and for Guard Spell use Molten Shell.

You can start using Arc right from the start, in act 3 you'll be able to link it with Archmage Support. We recommend you to craft a weapon with added Lightning Damage to Spells using Vendor Recipe: Magic Wand or Sceptre, Topaz Ring, and Orb of Alteration. Start with stats such as Life and Lighting Damage, then specialize in Block Chance, Critical Strike Chance, and Multiplier. Lightning, Ice, and Fire Golems give you more DPS, Chaos, and Stone Golems are defensive-oriented ones that one of which you'll summon after you can afford The Anime Stone. There is not much more to say, the leveling process is pretty simple and does not differ too much from the mapping.

Minor God: Soul of Garukhan: 60% reduced Effect of Shock on you, Cannot be Blinded, You cannot be Maimed

It can be played as a Starter build so it doesn't require any Unique Items. Inpulsa's Broken Heart is definitely one of the Body Armour that's great to have later on. Look for Critical Strike modifiers, increased and added Lightning Damage with Spells, increased Gem Level of Arc, and Cast Speed to increase your Damage. For defenses firstly cap your Elemental Resistances, get Maximum Life, and then seek Armour and Block Chance. You should also find a source of Life and ES Leech (on a Passive Skill tree you can pick Elemental Mastery or Light Eater for ES Leech).