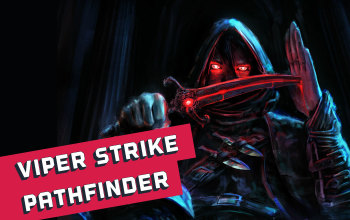 Viper Strike is currently the most popular Chaos Melee Attack in Path of Exile - assuming it's acceptable to use the term "popular" in regard to any Poison Attack build currently... Viper Strike offers high Added Chaos Damage, 60% Chance to Poison on Hit, and has double the base Poison duration, allowing you to greatly scale damage against Bosses. By utilizing Pathfinder Ascendancy to spread Poison on enemy death, it also offers reasonable clear speed and nearly 100% Flask uptime.

This is a typical Melee build that thanks to its tankiness allow you to jump in the middle of monster packs and kill them with a few Attacks thanks to the very high Poison DoT. This is a very durable build because of the aforementioned mechanics utilized, which will allow you to face-tank the majority of Bosses in the game. Thanks to Viper Strike's doubled base duration, it's also one of the best Skills in terms of stacking Poison on Bosses. Taking down Sirius, Cortex, Uber Elder is possible without excessive investments in gear. You are also going to cast Ancestral Protectors for high Attack Speed bonuses and extra Wither charges they can generate with Withering Touch Support. By using Multiple Totems Support you will be able to use up to three Totems to stack Withered quicker. Other than that we recommend using the Withering Step on your left mouse button for the Elusive buff and applying extra Withered stacks to enemies. By putting in it there on your Skill bar, It will be triggered basically whenever off cooldown, and it seems to provide a much smoother playstyle when compared to Wither Spell Totems (not to mention, they would collide with your Ancestor Totems) if allocated like that.

Leveling up with Poison/Ranger is easy. You have access to most of the Poison Multiplier and Claw Damage nodes right at the start. With Chaos Attacks and their high added Chaos Damage, you can easily level up without having to constantly upgrade your Weapons. However, it's not the best idea to level up using Viper Strike - simply because it has limited range and without extra Gems/Items it will only hit a limited number of targets. It's best to level up with Cobra Lash - it's a Projectile/Poison Attack that offers the extra Chain which will help you progress through the campaign at a much faster rate. You can socket your Viper Strike on your Weapon Swap to level up the Gem while you play, and respect later on when you have most of the gear ready. Below you will find the recommended Skill setups for lower levels, as well as, several extremely useful Uniques.

Below you will find the recommended equipment for this build. While technically it's possible to play a standard Viper Strike Pathfinder without any Uniques used, our recommended setup utilizes several specific defensive mechanics, and the following section will focus on it entirely. You can replace any of the Items with random Life/Resistances/Chaos Attack Damage affixes, but if so, it's highly advised not to use Passives like Transcendence or Iron Reflexes which may have a completely opposite result.

Using this opportunity, we would like to invite you to check our POE Currency market where you can buy cheap Orbs including Exalted Orbs, Chaos Orbs, and more, from other players using real money.