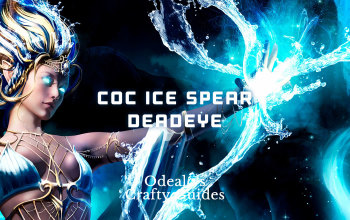 Deadeye hasn't been a popular class in quite some time now. Even though it's basically the primary choice when you want to play a Bow character. Your standard Attack/Bow Build will be simply too expensive, and it's not easy to scale enough damage for casual players to deal with the end-game content. At the same time, you need to think about your defenses, which are reliant on Dodge/Evasion rolls - not something you want to be dependant on when on a low budget - where you get one-shotted when they fail. Still, we set up a goal to make an enjoyable Deadeye character that doesn't require you to spend tons of currency on and will allow you to efficiently farm most of the content. We ended up making this Cast on Critical Strike Ice Spear Deadeye, who relies on several triggering mechanics to simultaneously cast tons of Skills including two instances of Ice Spear, Freezing Pulse, Ensnaring Arrows, and Frenzy. We may have been lucky when buying equipment (Lvl. 20 CoC + 110% Spell Damage Sniper Bow for 20 Chaos Orbs and 110 Life, 10% Life as Extra ES, and flat Attack Crit Chance for 50 Chaos Orbs, without links, may have been a bargain) but still, it's way cheaper then your typical Bow/Attack builds. In this build, you will be dealing Cold Spell Damage mainly from several Projectile Spells, so picking up Deadeye which grants an extra Projectile, Pierce, Crit. Chance and Tailwind is a great option.

Please note that you can also play this build as an Assassin (more Critical Multiplier/Damage) Pathfinder (Flask sustain).

You can also find our other Path of Exile builds right over here: Odealo's Crafty Guides - Full List

This feels like your typical Attack/Bow Ranger build, however, you will be dealing mainly Spell Damage with Spells triggered by your Bow. You are going to use Barrage linked with Cast on Critical Strike Support, which will fire several projectiles simultaneously and Crit multiple times with each Attack, triggering Freezing Pulse and Ice Spear. At the same time, equipping Asenath's Chant Helmet will trigger another instance of Ice Spear via its unique property, which will deal less damage but will offer Energy Shield Leech. If you are going to use Maloney's Mechanism, you can also socket additional Bow Attacks there - Ensnaring Arrow and Frenzy, which will slow down enemies, increase projectile damage taken by them, and generate Frenzy Charges for your character.

This build also offers very unique defensive mechanisms. Unlike your typical Deadeye build, you will not benefit from Dodge (unless you get it from Elusive buff or affixes on Rare equipment) and your Evasion Rating won't be high either, however, you should have approximately 8,000 to 9,000 combined Life and Energy Shield, and by utilizing Corrupted Soul, you will be able to benefit from both types of Leech simultaneously - Energy Shield Leech from Helmet's Ice Spear setup, and Life Leech from Doryani's Lesson on a Cluster Jewel.

You won't be able to level up this build with CoC support, and even after it becomes available it won't be efficient enough to carry you through the campaign. We recommend leveling up as a standard Bow/Attack character using Rain of Arrows - you can also use two instances via Lioneye's Paws Unique Boots which will offer amazing bonus DPS and clearing potential. Until level 12 when you can start using Rain of Arrows, it's best to use Split Arrow. It has a high base DPS and fires multiple projectiles.

It's recommended to respec at around level 70. You should be able to get a CoC Bow by then, which will give you the 7th link, and you should already have a reasonable Critical Strike Chance. Below you will find the recommended leveling Skills and several useful Unique Items that may come in handy on lower levels.

Below you will find all the recommended gear for our CoC Ice Spear Deadeye. This build requires several Uniques and specific Crafted Rares so it's not the best pick for a League Starter or a budget-build, but still, it should perform exceptionally well for a Deadeye in this budget.

At this point, we would love to invite you to visit our Path of Exile Marketplace where you can buy cheap PoE Currency with real cash, allowing you to easily complete this or any other desired build.