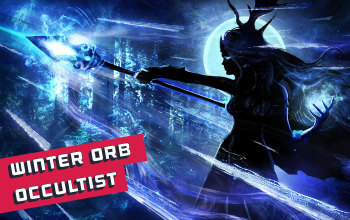 Winter Orb Occultist is one of the fastest and most reliable mapping builds, it's able to clear all game content

Winter Orb is one of the best mappings skills for a Cold Damage Caster. Occultist enhances the build by providing Power Charges, Increases Area of Effect, and Increases Cold Damage -  these three elements will be one of the most important parts of the build, it elevates the damage by a huge amount. This Build uses Badge of the Brotherhood, which is the most expensive Unique Item in this build. With 2 Void Batteries, all additional Maximum Power Charges from the skill tree, and after the first ascension, your Number of Maximum Power Charges will be equal to 9. In order to gain that many Frenzy Charges you'll need Chance to gain Frenzy Charge on Hit on Body Armour - a Redeemer's Suffix.

You'll also need Elusive - for movement speed and chance to dodge hits, Badge of the Brotherhood Increases its effect making it really good. With Life at around 4k and ES equal to around half of that, the build is relatively safe. By allocating Corrupted Soul we gain even more ES, but it requires leech on both - Life and ES. Your characters - due to its ascendancy - will be immune to all cold-related ailments: freeze and chill

One of the fastest clearing builds in the game, with Winter Orb you won't have to aim at enemies, just occasionally stop and channel the Ability for a second. Single target damage is good, the build is focused on clear speed but the damage is more than enough to deal with all types of content the game has to offer. Defensive capabilities are dependent on having good rare items - usually capping your Elemental Resistances and having much Life on them is enough, but there are few mods that are absolutely mandatory.

Equip wands with Increased Spell Damage and any spell that's available from the start, such as Storm Mine or Frostbolt, later switch to Winter Orb and try to mimic the final build. Invest in Tabula to go through the leveling process as fast as it's possible. Even without some really important mods and items, the game will be somewhat playable but meeting the requirements presented as obligatory will make the build as good as it should be in the later stage of the game.

KIlling all three Bandits for a couple of extra Passive Skill Points.

62 Points Skill Tree
Take all the Aditional Maximum Power Charges and Disciple of the Forbidden, invest in offensive and defensive nodes as you go

Minor God: Soul of Abberath 60% less Duration of Ignite on You

This build's source of power is its gear, so it's really important to get it right. In this section, you'll find all the guidance on which mods are important, which uniques are necessary, and what to look for when looking for items.