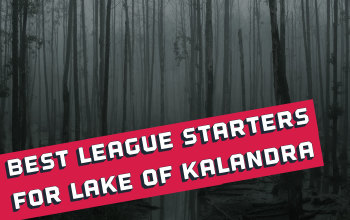 Best League Starter Builds for the Lake of Kalandra and Patch 3.19

The Best Starter Builds
for Lake of Kalandra League

The Lake of Kalandra expansion with its patch notes is here, and there is a lot to cover. The goal of patch 3.19 was to nerf the most popular builds and improve a lot of other, less frequently played ones. The most overpowered elements of the game have been nerfed. What's notable and relevant to all builds is the removal of a Mana Reservation Efficiency Mastery. It was the opportunity to grab the 15% increased Mana Reservation Efficiency from nearly any place in the Passive Skill Tree that deserved a nerf, an overwhelming majority of builds used it since nearly all builds in the game use Mana-reserving Spells. It will be harder to fit all the Auras and Heralds now, so pay closer attention to the Reservation Efficiency mods. The other very important changes include Dread Banner - it grants less Armour. Spell Suppression Chance is harder to get it from Items, but gathering them from the right side of the Passive Skill Tree is presumably much easier. A lot of other nerfs and buffs were implemented, be sure to read the Patch notes on the official Path of Exile website to learn more.

The Harvest changes combined with the Divine Orb and Exalted Orb shifts in value will stir up the prices of rare items. The drop rate of Unique Items has also been reduced alongside the aforementioned Divine Orbs, making a good Unique Item extremely valuable. We can only speculate what impact on the game's economy these changes would bring. Some of the oldest and least popular Uniques received an update or a complete revamp, making them a viable option for leveling and even as a core element of a proper end-game build. We can already see the potential of some of the Items presented, so be sure to check our website for more content that's yet to come.

The builds that got nerfed are: Righteous Fire - the damage and survivability are getting reduced, but despite these changes, it's still a good build, one of the most durable ones. Seismic Trap Saboteur, Explosive Arrow Ignite builds, and all the builds using Melding of the Flesh will perform worse, these will retain some of their former potency, but bury in mind that you won't deal nearly as much damage, and won't be able to reach high Maximum Elemental Resistances with Melding as easily as you would previously. The same goes for Ashes of the Stars, Crystallised Omniscience. Of course, we also have to mention the changes to Necromancer and its Minions. The power that you could derive from simply allocating passives and setting up the gem setups was disproportionally skewed, now you will also have to have the right gear pieces to improve your subordinates. It renders Necromancers less likely to be a pick for a starter build. The other noteworthy change is the removal of Unnatural Strength and changing it into Unholy Might, incentivizing the creation of Physical to Chaos or Poison Minion builds. For most Necromancers, it's very bad news. What we recommend for Necromancers is a Damage over Time type build, where Minions cause Poison, Bleed, or Ignite Ailments, as the penalties for this type of damage have been removed.

For the full list of our build guides, each rated on the merits of budget, boss damage, clear speed, and defenses, visit this link. Overall, the feedback to the announced league is overwhelmingly positive, and we cannot wait to deliver more build guides.

If you have any suggestions about other interesting Builds and/or Starter Builds for the Lake of Kalandra League we would love to hear your feedback! The patch introduces a lot of changes, and some new, build-defining items are added. There might be some hidden synergies in there that we simply didn't notice yet! Obviously, we will be updating all our Guides over the course of the newest League to match the current update, so let us know which of the existing ones would you like to see updated first.