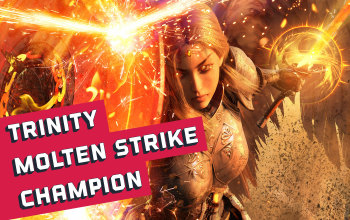 Molten Strike is a Strike Attack that after a successful Hit creates a number of Projectiles, these explode immediately after being created dealing AoE Fire Damage. The Strike Damage is itself converted to deal Fire damage at 60%. With this build, however, things are more complicated as you will deal both - Fire and Lightning Damage, linked with Trinity Support to create Resonance stacks for an insane DPS boost. There is no need to focus entirely just on one type of Elemental Damage because that's not how you scale up the damage in this build, what you will have a lot of is the generic Attack Damage. The damage is multiplied by the Perseverance Unique Belt and Dreamfeather Unique Sword. The Belt increases your Attack Damage by 1% per 200 Armour or Evasion, whichever is lower and the weapon boosts your Attack Damage by 1% per 450 Evasion (or Armour if using Replica version, but Evasion is slightly better in this build because of Armour and Evasion Mastery). In this build, you are going to use both Determination and Grace Auras, with Defiance Banner, to give you easily over 70k of both Armour and Evasion. Not only those stats will make you very tanky, but they will grant approximately 700% increased Melee Attack Damage. This bonus will be applied to your regular weapon damage, but also the extra added damage you are going to gain from Wrath and Smite Auras, resulting in some insane DPS numbers at a very reasonable budget.

Why Champion and not any other Ascendancy? Is a great defensive-oriented pick for any Attack Build. It grants you permanent 20 stacks of Fortify, a lot of Armour, Adrenaline, and free Banner with increased effect of Skill Auras. With this amount of Buffs, you can allocate the Jewel Mantra of Flames which adds Fire Damage per one Buff on you, which ends up being quite a lot. It's not a Crit build, but you will need more Accuracy than Maximum Life as you have to allocate the new Keystone - Precise Technique, which grants you 40% more Attack Damage. The defences are obviously very high as your Chance to Evade is 90%,  same as your Physical Damage mitigation with additional Fortify, Adrenaline, and some Block and Spell Suppression Chance. Your Life oscillates around 4k-5k which should be more than enough given your stats - if you pay attention to ground/dot effects, that is.

Despite it being a Melee Strike build it's not that bad at clearing maps as you focus more on the Projectile Damage rather than a Strike itself. With additional targeting for Strike Skills and an increased Strike Range, it works quite well. Use Smite - after using it grants you an Aura Buff for increased Attack Speed and added Lightning Damage. To grant yourself more Buffs use Ancestral Cry - it provides you Armour and increased Strike Range - both immensely useful. There is also a Buff from Ancestral Protector Totem for more Attack Speed you can take advantage of. For other Passive Buffs, you should get a Defiance Banner for increased Aura and Evasion, Grace, Determination, Blood and Sand, Wrath, Precision, and Molten Shell as the Guard Spell. During boss fights use Wave of Conviction, Flame Wall, and Sniper's Mark - all linked to Arcanist Brand. You should have some space left for your mobility skill - Leap Slam is the recommended one thanks to your very high Attack Speed.

You can safely start with Molten Strike with a focus on Fire Damage, pick the two Fire Clusters, and pick up the Point Blank and Call to Arms Keystones. Equip Perseverance at level 78 - it is one of the highest level restrictions, but until then you should still play the build relatively in the same fashion. Dreamfeather will boost your damage at the final stretch before you're able to put the belt on, the weapon requires level 66. Molten Strike Damage can be increased by Melee, Attack, Elemental, Fire, and Projectile Damage so it will be easy to find some of the more relevant mods on rare items.

27 Points Passive Tree
Go get the Fire Mastery to convert the remaining 40% of Physical Damage to Fire, Tribal Fury, and Golem's Blood

69 Points Passive Tree
Allocate Point Blank and Graceful Assault, Call to Arms and some Maximum Life, you have an Access to Precise Technique, but allocate it only when you meet its condition of having more Accuracy than Life

Major God: Soul of The Brine King: You cannot be Stunned if you've been Stunned or Blocked a Stunning Hit in the past 2 seconds

Your primary focus is Armour and Evasion Rating - none of these should be too low in comparison to the other. Your Auras are the main source of these stats, but you can still get more from the gear. There are a few Uniques that are mandatory, you Rings, Amulet, and Gloves should provide the Resistances and other necessary stats and Attributes. Flat Added Elemental damage to Attacks is good to have because of the massive damage multiplier this build offers, other than that look for extra Accuracy Rating, and Maximum Life.