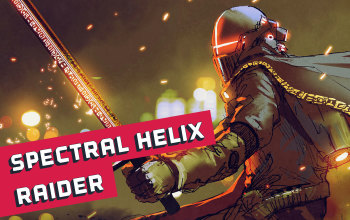 Spectral Helix is a Skill Gem that creates copies of your weapon, spiraling away from you and dealing your weapon's damage at 250% of its value. It's a Projectile Attack that's actually very similar to Vaal Spectral Throw - it shares the same tags and it's the modern take on this forgotten, but cool-looking Skill. To make it more viable - the blades now bounce off the walls up to three times (unless you use the Divergent version of the Gem). Thanks to this feature it's useful in enclosed maps with a lot of walls such as the Pen or Cells. The skill is very simple in the mechanics, it's just a regular Attack that fires Projectiles. It makes it very versatile - you can create a lot of builds based on it.

Raider seems to be the best candidate to make full use of this Attack - it's an ascendancy that specializes in the use of Frenzy Charges, Dodging and Evading Attacks, and high Attack and Movement Speed - its fast-paced playstyle is really fun. The core defense of this build consists of Maximum Life - 5 to 7k. On top of that, the character has a lot of Evasion Rating. The ascendancy Notables to take are Avatar of the Veil and of the Chase, it grants you Phasing, Evasion Rating, Elemental Damage, less Accuracy Rating of your Enemies, and more Chance to avoid Elemental Ailments while Phasing. The offensive aspects are Elemental Exposure applied to nearby opponents (for all Element types) and permanent Onslaught with at least twice its original efficiency. Exposure lowers the Elemental Resistance of your Opponents by 20% while Onslaught Grants 20% increased Attack and Movement Speed. The fact that the character is really efficiently lowering Elemental Resistance makes it natural to use Elemental Damage. With Trinity Support the potential for damage grows, but it requires you to balance all three types of Elemental Damage now - it can be done by acquiring a proper weapon and having Heralds and Support Gems that will match the rest of the build.

The only Attack that the build uses to deal with opponents is Spectral Helix. The damage is good enough to kill bosses and the AoE of the blades makes it not a problem to kill the pack of mobs - it's actually a really safe playstyle since you can cast the Attack while away from them, and after a while the spinning weapon will reach the target. The mobility Skill will be Whirling Blades - an Attack that can be used with Claws. From time to time it will be required to cast Blood Rage for more Attack Speed, Life Leech, and Frenzy Charge acquisition. Use Vaal Haste or Vaal Grace, and Ancestral Protector during tough fights for more Damage. You will also be able to use Tornado Skill to increase your Damage.

Spectral Throw is a great substitute for levels 1-12, and after that, you can start using Spectral Helix. You won't use Trinity Support until much later in the game, and it leaves you with some other options. We recommend specializing in Cold or Physical Damage as you level up - you will be easily able to reach Cold Damage Clusters on your Passives Skill Tree, and it will be more efficient at first. When you notice you lack in damage - respec the points and switch to a proper build. Use Claws with Shield. For the Cold Damage variant, you can use Essences such as Essence of Hatred on Weapon and Jewellery or Essence of Suffering on Jewellery. For Physical Damage use Essences of Zeal.

59 Points Skill Tree
first, take Trickery and then go down to pick up Longshot, and Thick Skin

There are no required uniques, you can gear up using only rares. You should look for Maximum Life, Elemental Resistances, Evasion Rating, Chance to Dodge, Critical Strike Chance and Multiplier, Attack Damage, Attack Speed, and Elemental Damage with Attacks. The final damage output should have at least two Elemental types of Damage at the same level to activate Trinity Support so don't put too much damage into one Element. Around 150 Dexterity and 120 Intelligence are required, it will have to be looked for in your gear. The generic nature of the build makes it easy to find discounted items on the market.