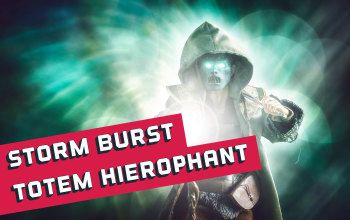 Totem builds are often played by Hierophants, as the Pursuit of Faith and Ritual of Awakening provides them with a significant advantage. It allows for an extra Totem, enhances their properties, and grants you more Damage and Mana Regeneration per active Totem. You will be able to summon up to nine or more of them, three of which will be responsible for the actual damage output via Storm Burst, others are Phantasmal Searing Bond Totems. They have a unique property of increasing the maximum number of summoned Totems per Gem Quality, but only the ones of their kind. With 9 Totems, your damage will grow by 45%, just from the Ritual of Awakening Keystones. The other Keystones from your Ascendancy Skill Tree to pick are Divine Guidance and Conviction of Power.

With Divine Guidance you have increased Maximum Mana, Transfiguration of Mind, and a portion of Damage taken from Mana before Life. It goes along nicely with Mind over Matter, and a vast, unreserved Mana Pool. This setup creates a very efficient defensive layer, where your Mana is able to absorb a lot of incoming damage before it's deducted from Life. It will require you not to reserve too much of your Total Mana, and that's why we recommend using only one Aura and linking it with Eternal Blessing Support. Having a lot of Mana matches with Arcane Cloak Guard Spell which grants extra Lightning Damage, scaling up with your Mana. With Viridi's Veil and Soul Mantle the character will also be Hexproof. The build has a moderate Critical Strike Chance when combined with Conviction of Power, enhanced by Inner Conviction.

For the majority of the time, using Storm Burst Totem will be enough as the damage is sufficient in itself, but for the boss fights deploy the six additional Searing Bond Totems and activate Vaal Righteous Fire to boost your damage. Storm Brand or Arcanist Brand can be used to apply numerous useful debuffs such as Curse or to grant you Culling Strike, Power Charges, or Innervation. The only Aura to be used is Wrath linked with Eternal Blessing. For a Guard Spell use Arcane Cloak, and for a movement Spell - Flame Dash.

Start with any Spell Totem. We recommend Holy Flame Totem, as it's available since level 1, has good AoE, and creates Consecrated Ground. It actually deals Physical Spell Damage with 50% Conversion to Fire, while the extra 40% will be acquired through Fire Mastery. Switch to Storm Burst only after acquiring Soul Mantle and Viridi's Veil. You can of course do it sooner if you feel like you will deal enough damage. Soul Mantle will save you a Gem socket, and Viridi's Veil will negate the downside of Soul Mantle. Start gaining more Mana after allocating Mind Over Matter, and be sure you have a high enough Mana Regeneration Rate.

When dealing with the bandits you can either help Alira, or kill all of them for two Passive Skill Points. Alira grants Resistances, Mana Regeneration, and Critical Strike Multiplier - it's all useful.

33 Points Skill Tree
head for Ancestral Bond Keystone, and pick all the nearby useful Notables for Elemental Damage and Maximum Life on your way. Don't forget about the Fire Mastery for Damage Conversion.

Major God: Soul of Solaris: 6% additional Physical Damage Reduction while there; is only one nearby Enemy; 20% chance to take 50% less Area Damage from Hits

The build requires a few Unique Items - Soul Mantle, Self-Flagellation, and Viridi's Veil are the most important. It's a very popular way in which you can make yourself Hexproof, make the Curses affecting you beneficial, and bear a lot of Curses at once at all times. Your Rare Items should provide Resistances, Maximum Life, and Maximum Mana - these are the most important defensive stats. For offense seek Spell, Physical, or Lightning Damage. To convert your Damage you can use Gloves Affix, Lighting Mastery, and/or Watcher's Eye. Gem Level of Spell Burst is important too, try to get at least two extra levels for it. Critical Strike Damage is a big part of the build, but your Critical Strike Chance won't reach 100%, not at least without completely altering the whole gear and Skill Tree. There should be no problem with getting enough Attributes to wield all the Items and to socket all the Gems. Cast Speed is somewhat important, Storm Burst is a Channeling Spell, but still benefits from this stat.