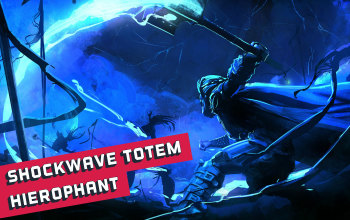 Shockwave Totem is one of the simplest Totem Skills in the game. It summons a Totem which deals Physical Spell Damage in form of a Nova. As it is common for most of the Totem builds, the best choice is to pick the Hierophant Class with Pursuit of Faith and Ritual Awakening - two immensely beneficial Totem Ascendancy Keystones. Another Hierophant's Passives worth picking are Conviction of Power for eight extra permanent Charges and Divine Guidance. It's a build that heavily relies on Mana as combined with Mind over Matter, Arcane Cloak, and around 3000 unreserved Mana, it will amplify both - offensive and defensive aspects of it. The build is very simple and offers a lot of elbow room when putting together. Only one Unique gear piece is required - the Astral Projector Ring. In our version, we included two Large Cluster Jewels and four Medium ones.

The Shockwave Totem deals purely Physical Damage, but after conversion, it should be Lightning Damage only. Converted Lightning Spell Damage is much easier to scale up on a Hierophant than a purely physical one. You can benefit from Arcane Cloak Buff which is based on the Mana you spent on it, and, for a Templar, it is very easy to access the Lightning and Mana nodes on a Skill Tree. Lightning mastery and Physical to Lightning Support Gem will be sufficient to convert almost all of your Damage. It's also a build that includes a lot of Critical Strike mods to reach nearly 100 Critical Strike Chance. The Damage is overall pretty good as you will be able to summon five Totems. The defenses are great too, your actual Life Pool which is around 4 to 5k will be amplified by your Mana, as over 40% of Damage received will be deducted from your Mana Pool. It has also some Armour, Energy Shield, and Block Chance.

It's a default Totem build - you have to place Totems ahead of you, these will target and kill enemies with a small help from Astral Projector. The peculiar aspect of the build is the Mana management. You have to constantly cast Arcane Cloak that consumes 65% of your Mana and have Zealoty linked up to a Divine Blessing, preferably at all times. Activating it will also remove a big chunk of your Mana Pool. To apply Exposure use Lightning Golem linked to an Elemental Army Support Gem, cast automatically as you take damage. Another useful foot, especially for boss fights, is an Arcanist Brand linked to an Innervate Support and Culling Strike Support. For a Curse use Conductivity, and for a movement Skill - Flame Dash.

We recommend starting with an Elemental Spell Totem, Holy Flame Totem is a perfect candidate as it's available since level 1. Quickly convert the remaining half of the Physical Damage to fire via Fire Mastery, and pick the Fire, Spell, and Life nodes on a Skill Tree. Continue leveling with Holy Flame Totem until you acquire a 5-link, and after level 40, which is the minimum level to wiled Astral Projector. Keep your Elemental Resistances, Maximum Life, and mana high at all times. You can pick Mind over Matter and Agnostic if your Mana Pool and Mana Regeneration Rate are exceptionally high.

33 Points Skill Tree
Pick Ancestral Bond Keystone, Totem, Spell, Elemental, and Life nodes. Pick Mind over Matter or Agnostic if you feel like you can sustain the mana drain.

Major God: Soul of Solaris 6% Physical Damage Reduction if there is only one nearby Enemy; 20% chance to take 50%  less Area Damage from Hits

What you're looking for is primarily the Critical Strike Chance and Multiplier for Spells, increased or added Spell, Elemental, Physical or Lighting Damage, and the Gem Level of Shockwave Totem. Remember that the Gem setup and Skill Tree will convert 90% of your Physical Damage to Lightning, the remaining 10% should be covered by your items. The easiest way to do so is to craft the conversion mod on your Gloves. The Essence of Insanity opens a possibility for a better Mana sustain when used on an Amulet. As for the defensives, aim mostly for Maximum Life, Resistances, and some Armour with Block Chance. Bury in mind that your Maximum Mana and Mana Regeneration Rate are very important, you should have 3000 Maximum Mana and a reliable way to regenerate it rapidly, as it is a source of your Damage and also improves your survivability significantly. As for Unique Items, you should get the Astral Projector Ring, Clear Mind Jewel, and Militant Faith Timeless Jewel to gain Inner Conviction. It should be easy to get all the required Attributes.