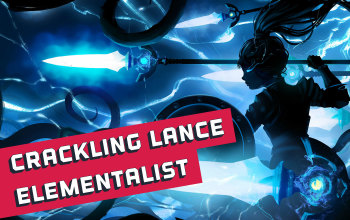 NOTE: THIS IS A WORK IN PROGRESS, COMPLETE UPDATE WILL BE MADE AFTER PATCH 3.17 GOES LIVE

Crackling Lance is a very interesting Spell that was added in Patch 3.12 and then severely boosted later on. It deals massive Lightning Damage, which is increased by each stack of Intensity (on top of the standard bonuses granted by the corresponding Support Gem). This build revolves around converting 50% of your Lightning Damage to Cold Element via Call of the Brotherhood Ring and using Trinity Support that boosts your Elemental Damage significantly. The use of Trinity is optional, as you could technically reach similar DPS with other Gems, but sounds cool and looks cool (adds a new circular buff indicator on top).

As of lately, Elementalist became one of the best and most popular Spell-caster classes which is oriented on increasing Elemental Damage and effects of Ailments they inflict, but also it became much more efficient to boost your damage by using different types of Golems. In this build, you are going to use five different Golems which boost your damage and survivability, by also being linked to Meat Shield Support, they will taunt nearby enemies reducing the number of hits your character takes directly. For the defenses, you are looking at a very tanky Hybrid Build which around 9,000 combined Life and Energy Shield, with decent block Chance, Corrupted Soul Passive, two types of Leech, Physical Damage mitigation, and Life Recovery. Overall, this build is quite tanky, and thanks to massive DPS (over 10,000,000 Shaper DPS when fully buffed), you can easily farm all the content in the game.

This is a tanky Hybrid Spell-caster build which allows you to Dash/Flame Dash around Maps and obliterate everything by self-casting Crackling Lance. Entire screens of enemies will die nearly instantly, with only Bosses requiring several hits to be killed. This build offers amazing defenses, so you can basically jump into packs of enemies without worrying too much about surviving. As a character, you should be even able to easily take on most of the AoE hits the game has to "offer" - like for example Shaper's Slam. This build utilizes five different Golems, but thanks to Elementalist Ascendancy they will be resummoned automatically when slain. It leaves you with only 3 Skills that you are going to use, your Movement Spell of Choice (Flame Dash or Dash), Crackling Lance, and Hydrosphere. Hydrosphere reduces Cold and Lightning Resistances of all enemies in its' radius, and should be used mainly against Bosses - you should know that you need to hit it with Crackling Lance so that it starts pulsing and applying Cold/Lightning Exposure with increased effect from Mastermind of Discord Passive.

This build also requires Glorious Vanity Jewel, in order to gain the bonuses of Corrupted Soul Passive. It causes the damage you take to be divided nearly equally between your Life and Energy Shield, which allows you to Leech both simultaneously, greatly boosting your defenses.

Leveling up a Witch/Elementalist is very easy. You can breeze through the campaign using Freezing Pulse and Frostbomb (which can be later switched to Crackling Lance/Hydrosphere). You can greatly increase the damage of those two Spells by adding Flat Spell Damage by Support Gems like Added Cold Damage Support and cheap Uniques like Replica Prismweave, Axiom Perpetuum which will let you quickly deal even with the toughest enemies and Bosses. You will also gain high DPS bonuses from Golems starting from Act 4, where you should be able to already have three Summoned for high DPS bonuses. Below you will find the recommended Gem setups and several Unique Items that will be extremely useful on lower levels.

3.17 PASSIVE TREES AND POBs WILL BE INCLUDED AFTER PATCH GOES LIVE

3.17 PASSIVE TREES AND POBs WILL BE INCLUDED AFTER PATCH GOES LIVE

Below you will find the recommended gear for our Crackling Lance Elementalist. Most of the gear is optional, with only Call of the Brotherhood and Glorious Vanity Jewel being the must-have Items. All the other equipment can be replaced with random Rares and/or Uniques that offer similar stats and utility. Overall, this build can get pretty expensive, but it can be played on a medium budget as well.