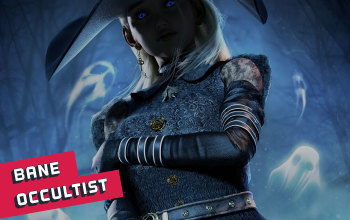 Bane Occultist is a great league starter - it's cheap, doesn't require any expensive and specific items, it's capable of dealing with the endgame content, and it's easy to understand and play. It's a life-based Occultist build that deals mostly Chaos DoT through Bane and Essence Drain - Bane is a highly mana-efficient Spell, it inflicts linked Curses upon the enemy, and for each, the damage is increased by 40%, the Curses itself have their effects magnified. Occultist is an easy choice since you can apply an additional Curse via your Ascendancy, and it synergizes well with Chaos Damage. You can inflict extra Curse by taking Whispers of Doom from Passive Skill Tree, and if your budget allows for it, the maximum number of Curses can be increased further from your gear. Essence Drain is used for clearing, combined with Profane Bloom it provides a smooth gameplay

It's a Life build with a noticeable Energy Shield and Evasion Rating, your Chaos Resistance is very high, and due to the weapon you're using - a two-handed Staff, it has a high Block Chance too. Elemental Ailments avoidance and Armour play a small role in your defenses too. to increase your damage look for Chaos Damage and Damage over Time, your Bane linked with Curses will deal enough damage to carry you to the red maps with a mediocre build. Link your Bane with Curses such as Despair, Punishmen, Temporal Chains, or Enfeeble. Singe Target Damage is great due to Vaal Blight and Wither Debuff stacking, and the curses themselves obviously help you immensely.

Use Essence Drain and Bane to kill weaker enemies that come in great numbers, these will die rather easily and explode on death. Use Blight and Bane for more vital opponents - Bane Spell has a very low Mana Cost so you can use it rapidly to deal even more damage. Vaal Blight is a Spell to use on bosses - it slows them down, deals a lot of DoT, and Hinders enemies. For Auras use Malevolence, Clarity, and Arctic Armour. Use Flame Dash as a mobility Skill, and your Guard Spell could be Steelskin.

Before Act 3 you won't be able to use Bane, until then you should use a substitute Spell, it can be any Spell you're comfortable with, for example - Arc. Your initial Skill Tree won't consist of any specific nodes, just the plain Life, Spell Damage, and other such stats. Around Act 3 when you can choose Bane as a Quest Reward, start investing in Chaos Damage and Damage over Time. Use Essences such as Essence of Envy or an Essence that'd amplify your Elemental Damage. You can also use Vendor Recipes.

For weapon use Cane of Unraveling or Cane of Kulemak with better stats. The latter is obviously harder to find thus more expensive Staff, but it has a higher potential of being a direct upgrade compared to the former. Spreading Rot is a great Jewel, it's affordable and obligatory if you're using Blight. On your Rare gear look for Maximum Life, Elemental Resistances, and to increase your Damage - Chaos Damage and Damage over Time. You can craft some affixes to lower your Mana Cost of non-channeling Skills if Essence Drain gets too expensive. You will need to find some Strength if you want to have Steelskin at the highest level.