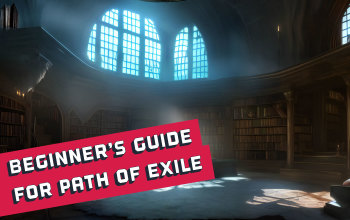 Beginner's Guide for Path of Exile

Welcome to our in-depth Path of Exile Guide for Beginners. The following article contains just the basic information on this amazing APRG game and its core mechanics, but that's solely because it would be impossible to cover all the subjects on a single page. Every single topic mentioned shall have its own separate Guide (or multiple Guides in some cases), which you can find links to in the table below. Our team at Odealo is dedicated to providing high-quality content for Path of Exile, which is mainly oriented on intruding the game to more casual players. We specialize mainly in Character Builds, with the majority of the Skills, and build-defining mechanics, already covered in our Guides and constantly updated.

What is Path of Exile?

Grinding Gear Games' Path of Exile is an ARPG that's been slowly evolving over the past 10 or so years to become the overly-complex game it is now. It's being constantly updated, with new content added and/or reworked in a major way every three months. It is when the economy is being reset, everyone starts a new game on equal grounds with all the progress carried over to the Standard. The first month of a new League is the most active period with around 100k players online. The game is slowly becoming more and more popular among ARPG fans and shows no signs of slowing down. If you've enjoyed Blizzard's Diablo franchise, it's definitely worth checking out.

What to expect from it and who is this game for? It's a massive time-sink with a lot of mechanics taking a lot of time to fully understand. The game is mostly about items - seeking, crafting, and trading them. Creating a perfect character with the best items is a wild-goose chase. Even beating the most powerful (aspirational as they're called) bosses is a feat achieved only by a handful of the most skilled and dedicated players. Gaining more knowledge which results in seeing the numbers going up is certainly satisfying. The three-month period is more than enough to achieve your goal - beating all the bosses, completing the 40 achievements, or simply getting bored of the seasonal twist. To sum it up: It's a game about grinding for gear.

There are 7 characters to choose from, six of which can be later developed into one of three sub-classes called Ascendancies (Scion is a special case). After the ascension, you're presented with a small and extremely interesting smaller skill tree with powerful upgrades found nowhere else. The other noteworthy difference between characters is their starting location on the passive skill tree. The chosen Ascendancy class can be changed, but the character itself can not, you'd have to create a new one and level it up from the start. Each character has also slightly different starting stats (Attributes), but that's rarely a concern. There are no other character-related restrictions or bonuses, that's basically it. You can check them here: https://www.pathofexile.com/ascendancy/classes

As fun as experimenting with the multitude of tools provided can be, there is a reason that a lot of players pick a specific, premade build. They're proven themselves to be good and cost-efficient. There is plenty of content creators for Path of Exile, including our team here at Odealo, where we are dedicated to providing high-quality Build Guides oriented on being available for the majority of players out there. You can find the link to all our Path of Exile builds in the table at top of this article. 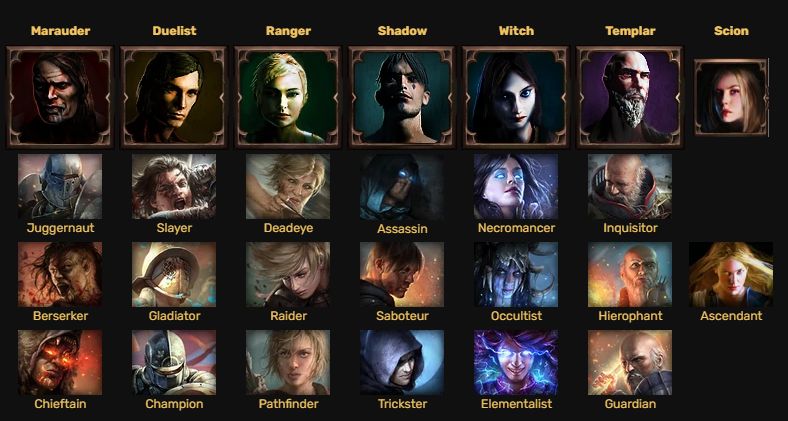 Path of Exile is a very large and complex game, so in order to get you introduced to all the mechanics, you start your journey on a 10-Act Campaign. In the first zone - The Twilight Strand, you will receive your very first base weapon, one Skill Gem, and one Support Gem, which will vary depending on your character class. The weapon will be already adjusted to allow you to use both of the Gems and allow you to get started in Wraeclast. You are obviously going to follow the main storyline to progress through Acts, but it's critical to complete most of the side quests as well. Some of them can provide valuable Items and gear upgrades, but others, the most important ones', grant you Passive Points. The latter are mandatory, and eventually, all the characters need to have them all completed. By the end of Act 10, your level should be somewhere around 64-68, whereas the first Maps open up level 68 zones, offering a relatively smooth transition.

While the Acts are mainly an introduction into the game, Map, and Atlas system, as well as, the end-game, it is also quite challenging for new players. It's one of the most widely covered topics on our website, with various Leveling Guides for most of the classes. You will find links on the top of the page. Our Leveling guides' aim is to help you start quickly and efficiently taking the most optimal path. We've selected the most popular archetypes and provided a detailed description of what to do at every stage of the game. After reaching levels 70 to 80 you can start assembling the desired, more specific build.

The Passive Skill Tree is definitely a trademark of this game by this point. You're presented with this terrifying/splendorous entangled mesh of beads with almost no introduction, which might be discouraging. There are small nodes, bigger nodes called Notables, and the biggest and most influential Keystones which are very specific and come with a major drawback. These passives often form circular clusters centered around a specific theme with a correlated Mastery inside, like for example: Poison. You can check the whole tree here: https://www.pathofexile.com/passive-skill-tree

You don't have to memorize anything - the simplest way to navigate it is to use the search function and look up the nodes you want to pick up. Later on, you will start noticing patterns, like that the Strength nodes are often at the bottom and bottom-left, Intelligence is more plentiful at the top, and Dexterity is abundant in the bottom and bottom-right parts. Then there are less obvious implications like that the Sword-upgrading passives are found only at the bottom of a skill tree - it is because Sword-using characters are often the ones starting at the bottom part of this skill tree. It might also suggest that Sword users are tied to Dexterity and Strength more than Intelligence, and that's also true. 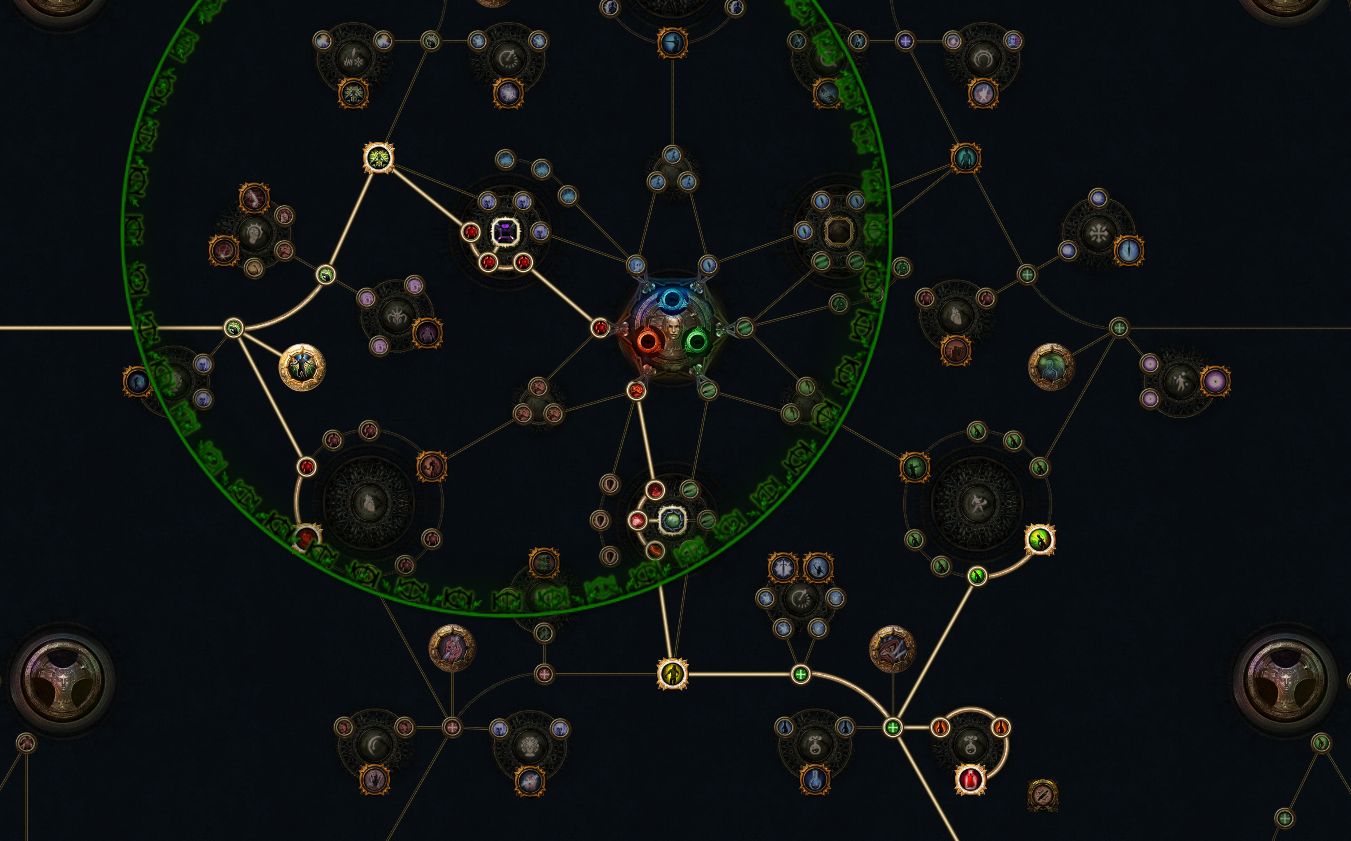 To use a Skill, in most cases, you will need a Skill Gem socketed somewhere in your gear. These come in three flavors - red, green, and blue. Each of them can be an Active Skill or a Support Gem. Usually, you want to link one Active Skill that you will use most of the time with a few Support Gems that would increase its effectiveness and Mana Cost. Remember to check the Gem tags located at the very top of every description to see if the Gem is active or supporting and if it will have any effect, or why it does not. For Gems to affect each other, the socked they're in need to be linked which is visible after hovering over an item.

Active abilities are almost always Spells or Attacks (or a secret third thing - Warcries). Attacks deal damage sourced from the weapon, Spells' damage is defined by the numbers on a Skill Gem. All the Buffs and passive Auras are Spells too. You can check all the Gems on the official Wiki: https://www.poewiki.net/wiki/List_of_skill_gems

Sockets can be red, green, or blue, and can only accommodate the Gem with the same color. There are also very rare white sockets that can host any Gem. Gems always have Attributes requirement - one or two of Strength, Intelligence, or Dexterity. More about Links and Sockets: https://www.poewiki.net/wiki/Item_socket

All Gems are available to acquire from Lilly Roth in act 6 after completing her quest and are really cheap. The only expensive Gems are the ones with high Gem Level and Gem Quality. There are also Gems with an alternative Quality found in Grand Heist's Displays - farming them is a mid to late-game activity. You can freely trade them as to item in the game is bound to a character or an account. 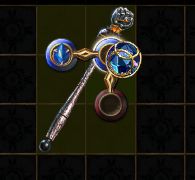 Orbs in Path of Exile are very functional, and most of them are primarily used to modify Items. It creates a self-regulating "gold sink" to prevent inflation. Orbs are used to modify gear pieces, Maps, fragments, and also some other miscellaneous Items in many different ways. However, not everyone is interested in Crafting Items, as it does require a lot of Orbs accumulated to offer a reasonable chance for a desirable outcome, and you need to be more of an experienced player, not to lose too much money in the process. This fact turned Orbs into Currency Items, that are used mainly as a means of exchange between players. The most commonly used Orbs are Chaos Orbs and Divine Orbs, and we wouldn't recommend using them at all to modify items as they are far more valuable when trading with other players for the specific items you need (that is unless you're playing Solo Self-Found where trading is not possible). Orbs can be found anywhere and their value is measured only in relation to other Orbs - mainly Chaos and Divine Orbs. Their value shifts through the duration of a league, often in a predictable manner.

Path of Exile allows players to trade with each other, and most of the Items in the game are tradeable. The only exceptions are Quest, Cosmetic, and some League-specific Items. Surprisingly enough, the game does not have any built-in tools to help players Buy and Sell their Goods, and the in-game Trade Chat is basically dead. Trading in Path of Exile is done on external websites, up until recently poe.trade, and currently, via the official website at: https://www.pathofexile.com/trade The system is far from being convenient but gets the job done for the more experienced player. On the other hand, if you have just started your PoE adventure, trading may give you a headache at first.

Maps are the foundation of Path of Exile's end-game. They can be opened after completing all the 10 Acts, by using them in the Map Device. Doing so will open Portals to a high-level zone, with a predetermined tileset, monster level, and a final Boss - depending on the specific Map's base type. Maps, just like your standard equipment, can be modified with Orbs, whereas, adding more modifiers increase the difficulty of your Maps, but at the same time the amount and quality of your loot. Completing different Maps allow you to gain Atlas Passive Points (yes, yet another large and complex Passive Tree for you) which can further determine the difficulty, rewards, and other perks found on your Maps. This is an incredibly vast and difficult subject, so we will be dealing a separate Guide on the Atlas progression and strategies on how to set it up properly.

If you have any other Guide requests please leave that in the comments below. We are always open to suggestions and constructive feedback.