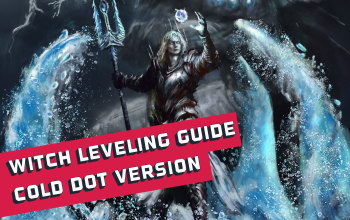 Cold Damage over Time is quite unique archetype introduced to Path of Exile. There are many ways to build a character around this mechanic, with different Defences layers and expectations about the end-game capabilities. Even though those Builds vary a lot from each other, leveling process is very similar for all of them. Occultist is the most popular choice of Ascendancy for such Builds, but Elementalist is a fairly viable option too.

This Guide aims to help you with the progression from the first Act to the very end of the Campaign, regardless of how your final Build might look like. Most of the customization and build-defining features happen around level 70, but feel free to experiment on your way there. Just by doing Quests along the way, you can get up to 20 Passive Skill Refund Points, and most of them are included in regular Passive Skill Point Quests, so you want to complete them anyway. There are many Passive Skills that are fairly useful, just not optimal for your final build. Such Passves like additional Elemental Resistances, Attributes, or Mana Regeneration, are usually very close to your Skill Tree patching and can be a great help during leveling.  Witch Builds are often specialized into Energy Shield as their main Defense, either by picking up Chaos Inoculation or Reserving their Life for additional Auras. This means picking up Maximum Life on Passive Tree would be a waste, but it is very helpful if you do so during the Campaign. During the leveling, you will have very low amounts of Energy Shield, while your base Life will increase with every new Level.

When creating a Build with Cold Damage over Time as the main theme in mind, you can choose among a few particular Skills. They all have their own strengths and weaknesses, or different playstyles, but they all are very much viable in the end-game. Some skills however are just better than others in the early game. We recommend leveling up by using Wintertide Brand as your main Skill and Vortex as a secondary supplement of damage.

Wintertide Brand is the first Skill you will get access to that belongs to the Cold DoT Skill archetype. It is a Brand Skill, that deals increasingly more Damage for each Stage it gains. When full Stages are reached, it releases a big wave that deals maximum DoT damage to all nearby enemies. It is a very strong Skill that has both good clear speed and very strong single-target Damage. By default, you can have up to 3 Active Brands at once, and 2 of them Attached to the same Enemy.  Getting more Cast Speed accelerates the rate of gaining Stages, and casting Brands themself. You will be rewarded with this Skill Gem for entering the Caverns of Wrath in Act 1.

From the same Quest, you will also be awarded a Creeping Frost Skill Gem. By casting an icy projectile, you will create a Chilling Area at the impact. This Area will slowly move towards the closest enemy. It's also a strong Skill and you can freely check if you like it better than Wintertide Brand, but we find it lackluster without proper support available later in the game.

In the next Act, you will gain access to the Cold Snap. This Skill has a Cooldown that can be bypassed by spending Frenzy Charge. Conveniently enough, monsters killed in a Chilling Area made by this Skill have a high chance to grant you a Frenzy Charge. This Skill suffers from slow Cast Speed and rather limited Area coverage at the lower levels.

In Act 3 you will get a very powerful Skill called Vortex. It is an Instant Skill with a short Cooldown, that leaves the Chilling Area underneath you when used, and you can also use Frostbolt to get higher Area coverage as it will explode at their location instead. It is a very desirable Skill to use either as a supplementary damage bonus or even a main damaging ability due to being an instant cast. For leveling purposes, we recommend the first option as the Cooldown is quite noticeable early on.

Exposure is a very important tool for every Elemental build out there. It lowers the enemy' Elemental Resistance to their corresponding Element by a fixed amount. The best Skill to apply Cold Exposure is the Frost Bomb available in early Act 1. It creates an orb that explodes after a short duration and applies Exposure as well as a Debuff that reduced Life and Energy Shield regeneration on the enemy.

The best Curse for such builds is Frostbite. It lowers Cold Resistance and gives a solid chance to Freeze enemies with your Cold Damage. Note that you can Freeze only with Hits.  If you get a source of additional Curse on enemies, you can use Elemental Weakness to shred the Cold Resistances even further.

There are many powerful Auras to boost your Damage, but for smooth leveling, we recommend using the Defensive Aura instead. Most likely you will have enough Damage to quickly kill monsters anyway, but Armour or Evasion is quite hard to come by if you don't pay attention to every single Item you drop. Determination or Grace are very strong Auras available in Act 3 and you should pick one depending on your final build.

Steelskin and Stone Golem are very useful skills to boost your defense even further at a very little cost. They are especially important when you decide to do Lord's Labirynth for your Ascendancy Points. Steelskin provides an absorbing shield, while Stone Golem grants you a healthy amount of Health Regeneration.

To move around more swiftly, you should use Flame Dash. It is a very potent Travel Skill available in Act 1. It has long range and short cooldown on charges. You can store up to 3 uses, and the first cast is instant.

With every new Act, you will unlock new, more potent Support Skills so your setup will change accordingly. To avoid any problems with different socket colors, we recommend using a Tabula Rasa Unique Armour. It is a very small expense and will save you a lot of time. You can skip this option and use only the found Gear with no problems, In that case, you should keep eye on Intelligence-based Items, as they tend to have mostly Blue Sockets. When using a 6-link, you can optionally choose to put 2 Active Skills with 4 Support Gems in it.

New Skill Gems are unlocked by doing specific Quests during the Campaign, either as direct Quest Reward or indirectly by unlocking the possibility to buy it from Vendor, most of them are on the way to the next Act anyway, but Library one in Act 3 requires extra effort. You will gain access to every Gem regardless of your Class in Act 6 by doing Lilly Roth's Quest. Doing so will also unlock her shop in your Hideout for every new Character you make in the same League.

Act 1: Once you arrive in Town, talk to Tarkleigh to get Freezing Pulse Skill Gem. It is a solid Skill that will serve you well until you get access to Wintertide Brand at the end of Act 1.

In this Act, you will gain access to the following Skills: Freezing Pulse, Wintertide Brand, Steelskin, Flame Dash, Clarity, Frostbomb

Vortex is available in Act 3 as a reward for killing Commander Gravicius. You can use it in a separate 4-link setup or as a double 5-link with Wintertide Brand.

In Act 1 you will unlock very useful Utility Skills, while Act 3 will give you access to powerful Auras and Curses.

Leveling is a very smooth process for a Cold Damage over Time user. The Skills are fairly strong on their own and do not need any extras for the Campaign. Your Damage mostly comes straightly from Gem Levels and Support Gems. For that reason, the best Unique Armour you can get is Tabula Rasa. It is really cheap and saves you a lot of time. Alternatively, just use any 4-link item with matching Socket Colours. Having proper Links is more important than any modifiers on the Item. If you got your Links sorted out, it's time to talk about the Weapon. The best leveling wands you can get is a simple Rare Item with just one modifier: "+1 to Level of all Cold Spell Skill Gems". Other useful modifiers, like Spell Damage or Cold Damage, or even Cold Damage over Time Multiplier, are of course very welcome, but not as important. You can find such a Wand on the Market for a few Chaos Orbs with ease, or with a bit of Luck find it yourself in Act 1 as it is a pretty common modifier.

Proper Flask Setup makes Leveling much quicker and easier. Try to get 2 or 3 Quicksilver Flasks so you can have at least one active at all times. Granite Flask is especially useful once you step into Act 5, as there is a very noticeable spike in Physical Damage dealt by the enemies. You can swap one Quicksilver Flask for a Silver Flask, which will grant you Onslaught Buff for an additional 20% Movement Speed bonus.  20% Quality on each Flask is an easy way to prolong their Duration.

Passive Tree in Path of Exile looks scary and complex at the first sight, but it's quite simple once you get used to it. You don't need to remember every single Passive in the Tree in order to make a good build, just the general idea is good enough. To plan a Build, you have to consider which Passives are a must for your Build and which are optional. Your decisions will greatly affect your Damage, Defensive Layers, future Gear choice, and other resources. You will also have to adapt to your budget, Cluster Jewels are often very strong, but also cost a lot. 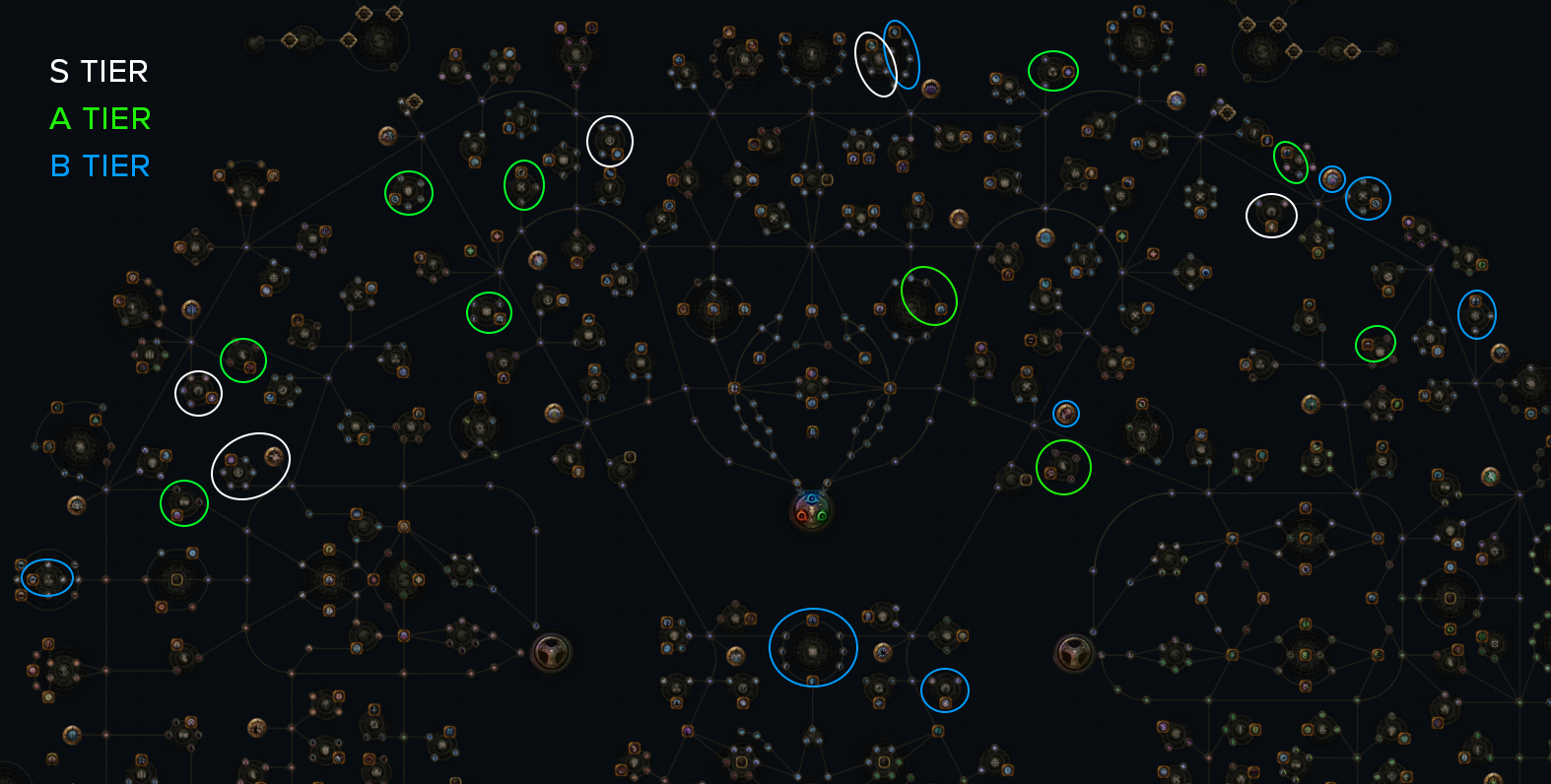