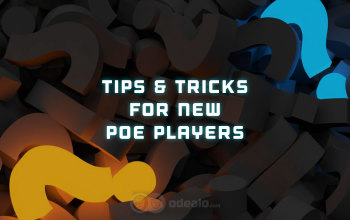 We have decided to put together all the valuable information for new PoE Players. Top Tips & Tricks are included in our Beginner's Guide

We have decided to make this guide for all beginner players that start their adventure in Path of Exile. Furthermore, we believe even experienced Exiles might find some valuable information here. This guide will include tips and tricks for:

If you have already possessed this knowledge and would like to find out what are our recommended builds check out the link below:

1. SETTING UP YOUR GAME

Vendor recipes are one of the best and the most effective ways of becoming rich until you get to the end-game content, and can farm Atziri and Shaper. There are several recipes that should be used unconditionally by all Path of Exile beginners and casual players. This is:

When choosing a character, you should determine two main factors: How are you going to deal damage? and how will you survive monster attacks? There are several main types of characters in Path of Exile, and to put it simply, we can divide them into:

It is very important to understand how certain skills have their damage calculated. All skills deal a certain amount of physical/elemental or chaos damage. While most spells have it determined by the skill gem itself, melee and ranged attacks will usually deal a certain percentage of your weapons base damage (whether it's physical or elemental). Both spell damage on skill gems, and your weapon's damage is increased by the flat added damage to spells and attacks (the damage values are added to that of the skill gem and weapon). Later on damage conversion takes place, and finally, it is multiplied by all corresponding damage type bonus, from your items, skill tree, and ascendancy points.
To understand how damage conversion works you should know there are two main types of damage conversion:

Any damage can also be increased by:

In a nutshell, this should give you a basic understanding of how damage works in Path of Exile. It is common that players assign certain passive points, and buy expensive items, while falsely thinking they will affect their currently used skills.

On top of the above types, Path of Exile introduced several other defensive mechanics that include:

In this section, we are going to cover only the most basic and important information about mapping. This will include the most valuable information for new Path of Exile players that just started their adventure. We might write a more detailed and in-depth guide about mapping and the Atlas if we see a lot of you guys interested in this topic :) Leave it in the comments below and we will get right to it ;)