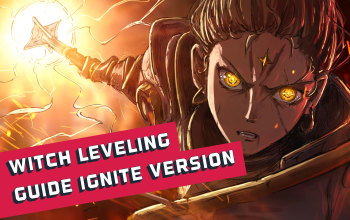 Leveling an Ignite Build is a very easy and enjoyable task. There are many different versions of such Builds, with different Damage setups, individual defensive layers approaches, and various goals they try to achieve. But as different as they might be, the leveling process is usually very similar for each of them. There is no definitive best way of completing the campaign, as everyone has their own definition of "the best", but in this guide, we will try to provide you with all the useful pieces of information to help you progress through the acts with your build.

The first thing we'd like to mention is that you can get up to 20 Passive Skill Refund Points from doing the Quests alone. Most of them are included in regular Passive Skill Point Quests, so you will get them without any extra effort. This is important because many times during leveling you will have some useful Passive Skills very close to your Skill Tree patching that are not particularly optimal for your final build, but can be really useful to you during your journey. Such Passives consist of Elemental Resistances, Attributes, or some minor Damage modifiers. It is especially important for Energy Shield Builds to invest into some maximum Life clusters, as they simply cannot reach good Energy Shield values without proper end-game items.

Another important piece of information is that regular Spell or Attack Damage modifiers do not affect Ignite Damage, only the generic Fire, Elemental, or Burning Damage modifiers work with it. That is the case because Ignite is based on the Base value of the Hit that inflicts the Ailment, so raising Gem Levels or adding Flat Damage will improve your base Ignite Damage.

Usually, as an Ignite Build you can start using your end-game Skill of choice right away when you gain access to that Skill Gem. At first, you can lack a bit of Ignite Chance, or the Damage won't be as strong as expected, but it always should be good enough for the campaign. It is especially easy on Elementalist, as you can get Master of Flames in your first Labirynth, granting you a 100% chance to Ignite with every Hit and a solid Damage bonus, but every Ascendancy can be made into Ignite Build and level as such.

However, there are 2 particular Skills that usually outperform any other Skill during the campaign in terms of pure Damage. Those Skills are Flame Wall and Fire Trap. Flame Wall is one of the first Skills you can get, you will be rewarded with the Skill Gem after opening The Submerged Passage in Act 1. As the name suggests, it creates a fiery Wall that burns any enemy standing inside of it and applies additional Damage over Time effect to everyone who even barely passes through it. You can also apply that DoT effect by shooting a projectile through it, and doing so will also add some Fire Damage to the Projectile Hit (remember our intro about Adding Damage to the base Ignite?). Flame Wall by itself has no Hit component, so it cannot Ignite.

You can get the Fire Trap by reaching The Cavern of Wrath at the end of Act 1, but you will have to buy it from Nessa, as she doesn't offer it as a quest reward. It is a Trap Skill that explodes and leaves Burning Ground when triggered by the enemy. The explosion can cause Ignite on the enemy.

During the campaign, you don't need to fully clear the area, you only need to find the entrance to the next location. Both of those Skills work very well with that playstyle, as you can throw Traps and Walls as you run through the monsters, and they will burn to the death while you keep running ahead. You only need to stop to fight the bosses or to refill all your Quicksilver Flask charges.

Another important Skill is Flammability Curse. It is a pretty simple Spell, it lowers enemy Fire Resistance and increases your chances to Ignite against the target. Use it to take down enemies faster, especially the Bosses and Rare monsters with dangerous Archnemesis modifiers.  The curse lasts about 10 seconds, so a single cast might not be enough in some situations.

If you are not using Fire Trap or already transferred to your end-game Skill, it is important to use Flame Surge on tough opponents. If you Hit Ignited enemy with this Skill, you will create a Burning Ground that lasts for 4 seconds and deals a quarter of the Ignite Damage every second. Burning Ground from this Skill, Flame Dash or Fire Trap doesn't stack.

Another very useful mechanic is Exposure. It lowers the enemy's Elemental Resistances by a fixed amount. You can get it from various sources at higher levels, such as Cluster Jewels or Implicits on the Gloves, but in the early game, you are pretty much limited to 2 skills: Scorching Ray and Wave of Conviction.  You can get Scorching Ray before your fight with Merveil in Act 1,  but to apply Exposure with that Skill you will have to cast it on a single enemy for a pretty long time. Wave of Conviction is available in Act 2 after you recover Baleful Gem from Chamber of Sins. Make sure it always deals mostly Fire Damage, to apply the correct type of Exposure.

Auras are a very important aspect of every build. During leveling, you don't really have the necessary tools to play around with Mana Reservation Efficiency. For that reason, we recommend using only one major Aura and the Clarity to get enough mana regeneration to cast your skills without the constant use of Mana Flask. As tempting as it may be to use Malevolence or Anger to get more Damage, we suggest using a Defensive Aura. You will have plenty of Damage anyway. Depending on your build, you might choose to use Determination or Grace. In some cases, you might be able to run both of them at once and still have enough Mana to use your Skills. They put however pretty high strain on your Attribute Requirements. Mana Reservation of Clarity increases with every level, so try to keep it on a low level.

Lastly, Steelskin is the best guard Skill you can use during leveling. It scales directly with Gem Levels and makes you immune to Bleeding. It doesn't remove them but gives you the opportunity to heal up. You can get it from Nessa in Act 1.

There are many Setups as you unlock new Active and Support Gems as you progress through the campaign. Getting the Tabula Rasa is tremendously helpful as you can easily swap gems without worrying about the colors. You can put both Flame Wall and Fire Trap in one setup to have 2 five-link setups as they share most of the Support Gems. Later on, it is better to use a fire Trap as your only six-link, and the flame wall will be strong enough to clear weak monsters anyway. If you don't like the Fire Trap, you can use any Spell of your choice with suggested Support Gems but change Trap and Mine Damage Support for Cruelty Support Gem.

Act 1:  As your first Spells, take Freezing Pulse and Flame Wall to deal with enemies.  You can swap Freezing Pulse to Fire Trap when you reach Caverns of Wrath.

Act 2: You will get access to new Support Gems after completing the Sharp and Cruel Quest. Use Elemental Focus Support as Ignite is still too weak to rely on it. Combustion is still useful as it gives more Fire Damage and there are not many other Support Gems you could use.

Act 3: You will get new Supports Skills when you complete A Fixture of Fate Quest. You can also buy them from Lilly Roth in your hideout if you completed her quest on a different character in your current League.  It is a good time to focus more on Fire Trap and less on Flame Wall.

Act 4: There are no new supports for Flame Wall. After unlocking Belly of the Beast, you can get Ignite proliferation support gem for your fire trap which will improve your clear significantly.  You can use this setup until you finish the campaign.

One of the most important leveling items is Unique Armour called Tabula Rasa. You can use that item at level 1, it has 6-links of White Sockets and nothing else. It might be hard to get on the first day of the new League, but at any other point, it is pretty cheap.  Another important factor to speed up your leveling process is Movement Speed. Getting good Boots and other sources of Movement Speed can save you a lot of time in the long run.

Getting more Maximum Life on your Gear is not that important yet. Most of it will come from your Passive Tree and gaining higher levels. It is important however to get high Elemental Resistances and some Armour or Evasion Rating. The Experience penalty for dying is not that bad when leveling, but re-running the whole location after death slows you down significantly. It is especially noticeable in Act 5 and Act 6, as there is a very high spike in Monster's Damage.

Many players tend to ignore their Flask setup at the early stages of the game, but that is a huge mistake. With just a few Orb of Alteration, you can get some pretty useful modifiers on your flasks. Remember to make them 20% Quality before turning them into Magic Flasks, as Glassblower's Baubles are more effective on Normal Quality Items. They don't need to be ideal, but every bit helps.

To create a successful Build that uses Fire Damage over Time as its main source of Damage, you will have to allocate Passives that increase that kind of Damage, give some form of defense, such as Life or Energy Shield, and boost your Auras, as you should always use at least few of them. There are way more useful Passives in the Tree than you can actually allocate, so you have to pick them carefully. Optimizing the Passive Tree pathway is one of the first fine-tunings you will make in Path of Exile. Cluster Jewels, as well as regular Jewels, are very powerful for scaling Ignite Damage, so make sure you will have enough Points for them too!
As a side note, a 1% Fire Damage over Time Multiplier gives more Damage than a 1% Increased Fire Damage modifier, however Passives that grant that modifiers usually have lower values. At some point, getting the Damage Increase modifiers will give you better results overall. 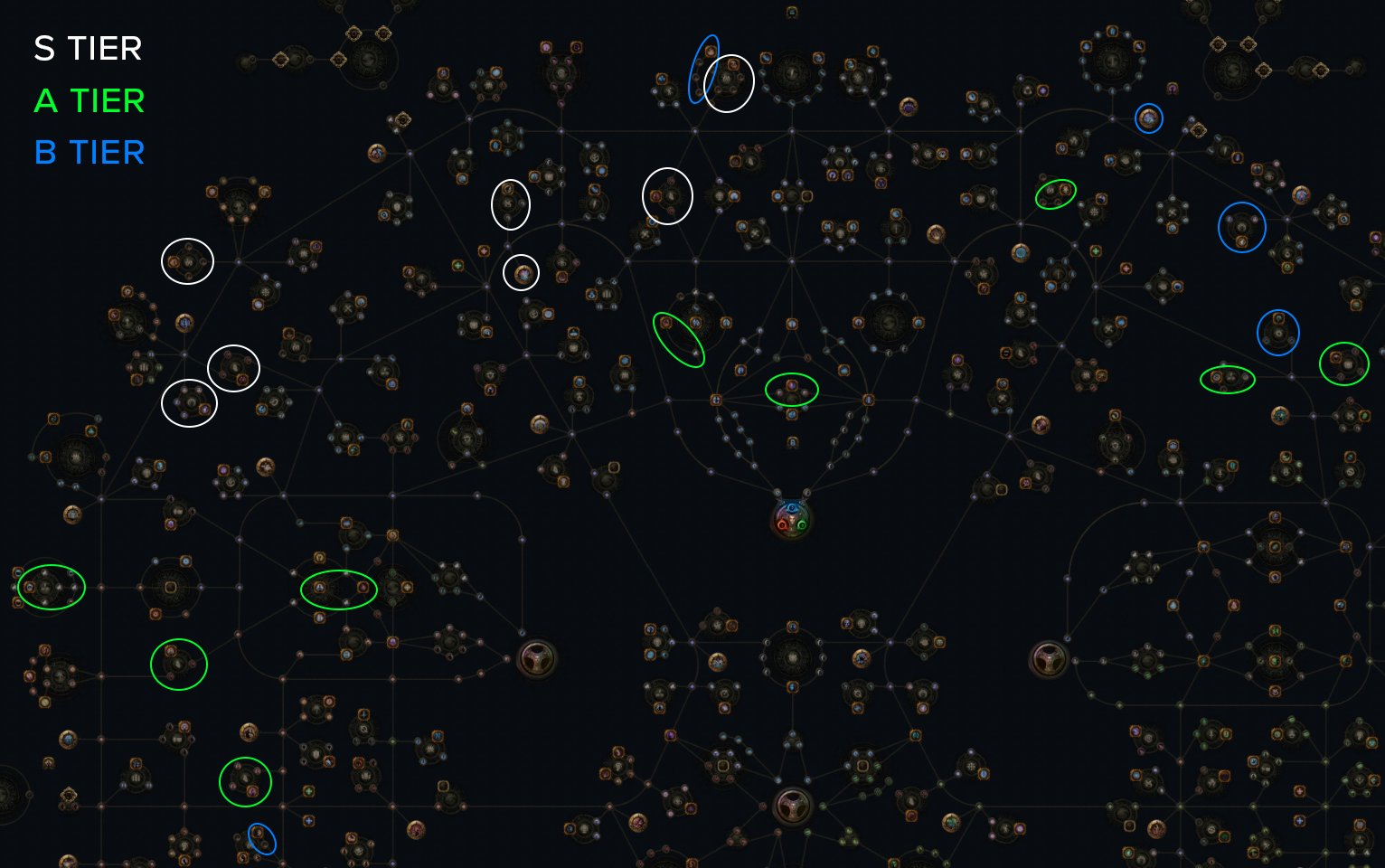