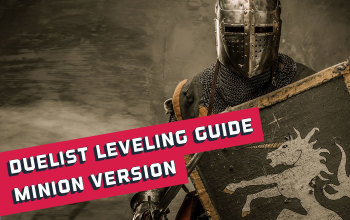 Among many Attack-type builds, Duelists' are one of the most appealing ones, especially for Melee enthusiasts. Slayer is a class specialized in quickly killing bosses, staying alive by leeching life from his enemies, or performing exceptionally well in crowded areas full of enemies. Champion is very efficient with Armour, Evasion, and overall Hit Damage mitigation due to the Fortify, Adrenaline, and Taunt mechanics. He's also suited to deal Physical Damage via Impale and can make very good use of Auras. Gladiator can utilize Block Chance and Bleeding mechanics the most efficiently. That makes these ascendancies very good picks for nearly any type of content in the game.

Although Attack Skills are very diverse, there are certain ones that are extremely efficient for leveling. Splitting Steel is the fastest way to get through all ten acts. It won't require any specific or unique items and it lays the groundwork for virtually any Attack build later on, with no need to revert many (if any) changes on your passive skill tree. Due to it being a Projectile Attack, not a Melee one, there will be some caveats to pay attention to which we will mention in due time. You can safely switch to your destined Skill during yellow or even red maps around level 80, and at this point, all items should be available for you to wield/wear. During the leveling process forage items with Physical Damage modifiers, your weapon will be especially important here. There are a lot of Attack-related Physical Damage nodes at the bottom of the passive skill tree, right outside Duelist's starting location. Start with the most fundamental stats such as the aforementioned Physical Damage, and for defenses opt for Maximum Life and Elemental Resistances, which should be capped at 75% at all times. During Act 3 you'll be given an opportunity to specialize in Impale via Impale Support Gem - by far the most propitious game mechanics for all Physical Attack builds. Get the 100% Chance to Impale on Hit, it's especially good with Splitting Steel Skill. Your performance can be then boosted by Totem or Banner Skills.

We recommend leveling up only with Splitting Steel. You can obviously use other Attacks such as Cleave, Cyclone, or Flicker Strike if you prefer to do so, it won't even alter the gear setup in any way as all of these Skills make use of a Melee Weapon. We will include a separate setup here for the Melee Skill of your choice, even if it won't be very different from the Splitting Steel one.

Splitting Steel can be picked up from Tarkleigh after killing Hillock during the first minute of the game. This ability consists of two Skills, one is used to fire a Projectile, and the second one is Call of Steel. You might notice some Steel Shards around your character, these are consumed after using the Attack and can be replenished by casting Call of Steel. Be sure that you always have Steel Shards, with these your Attacks are enhanced - you deal more Damage and the Projectile is getting split to damage nearby enemies aiming for them automatically, even if you miss the initial Hit. That's what makes this Skill so good, you don't even have to aim. If you've Impaled an enemy, using Call of Steel will damage them dealing more damage the more times they've been Impaled. We recommend using Call of Steel and Splitting Steel in an altering fashion to always have Shards up and ready.

For Mana-reserving Skills we recommend Pride, Precision, and Dread Banner. It will grant you more Damage, Accuracy - needed to actually land the Hits, and improvements to the Impale mechanics. These three Auras combined shouldn't reserve all of your Mana, but that depends on Precision as it requires more Mana the higher level it is. After no longer being able to accommodate these Auras, simply allocate Champion of the Cause and Bannerman notables on your skill tree. Precision is available at level 8 in Act 1, Pride and Dread Banner can be acquired after completing the first Quest in Act 3. In Act 2 you can briefly use Herald of Ash as your Mana-reserving spell, it's excellent in this very early stage of the game.

During boss fights you mind find yourself in need of more DPS. Deploy the Ancestral Protector Totem which will get you more Attack Speed. You can get it as soon as level 1. Another Skill granting you more Attack Speed (and Life Leech) is Blood Rage, but it comes at a cost of slowly losing your Life. Be careful with it, it drains your Life faster the higher the Gem Level of this skill is.

For a Curse use Sniper's Mark, it increases Projectile Damage, but if you're using a Melee Attack, switch it for Vulnerability. Curses are available in act 3.

You will need only red and green sockets on your gear. Be sure to avoid gear pieces with Energy Shield as these are often skewed to roll more blue sockets. Tabula Rasa is the sound solution to any of these issues. New Skill Gems are unlocked by entering a new Act and completing a quest, some of them can be granted as a reward but there is no need to pay attention to that, these are extremely cheap. In Act 6 you will be tasked by Lilly Roth to complete a quest, by doing so you're granted access to all Skill and Support Gems available for any class. It will also unlock her shop in your Hideout for every new Character you make in the same League.

If you really don't want to use Splitting Steel, you can alternatively pick a Melee Attack, it would make you slower as Hitting with Melee Attacks require closing the distance between you and the opponent, but it opens some new possibilities for a setup. Keep in mind that Splitting Steel has a built-in 60% Chance to Impale on Hit, other Attacks don't, and it will be needed later to get the required 100% for a noticeable damage bonus. For a Strike Skill, we recommend Boneshatter, alternatively use Cyclone, but it's not a very good idea to start with it as soon as you're able to.

You can start with some powerful items even at level 1, but their absence won't impair your performance too much. Physical Damage is the core damage source at any stage of the game. First, you can add and convert some of the Physical Damage to Fire, but shortly after that focus exclusively on Physical Damage. Attack Speed is quite important too. During Act 3 you should have a 100% Chance to Impale with Attacks, it's achievable by Impale Support Gem and/or passives on a skill tree. Unique weapons can be very good, especially Swords, we've listed the best ones down below. Do not pursue Critical Strike early on, it's not very effective at the early stages, but becomes much more important at level 80 and above.

Proper Flask Setup makes Leveling much quicker and easier. Try to get 2 or 3 Quicksilver Flasks so you can have at least one active at all times. Granite Flask is especially useful once you step into Act 5, as there is a very noticeable spike in Physical Damage dealt by the enemies. Lion's Roar Granite Flask can be used as soon as level 27 and is suitable for most of the end-game builds. 20% Quality on each Flask is an easy way to prolong their Duration.

To successfully create the Passive Tree for a Build, you have to consider most of the Passive Clusters for a given build, choose a few of them, and make an optimal path to allocate most of them in the least amount of Passive Skill Points spent. Here, we showcased the best nodes for a sword-wielding Duelist with a focus on Splitting Steel. Maximum Life, Damage, Resistances, and other very important stats like Attack Speed, Chance to Impale, or Accuracy will have to be taken into account. If you have Lord of Steel Jewel, head imminently for Jewel Socket and put it in. 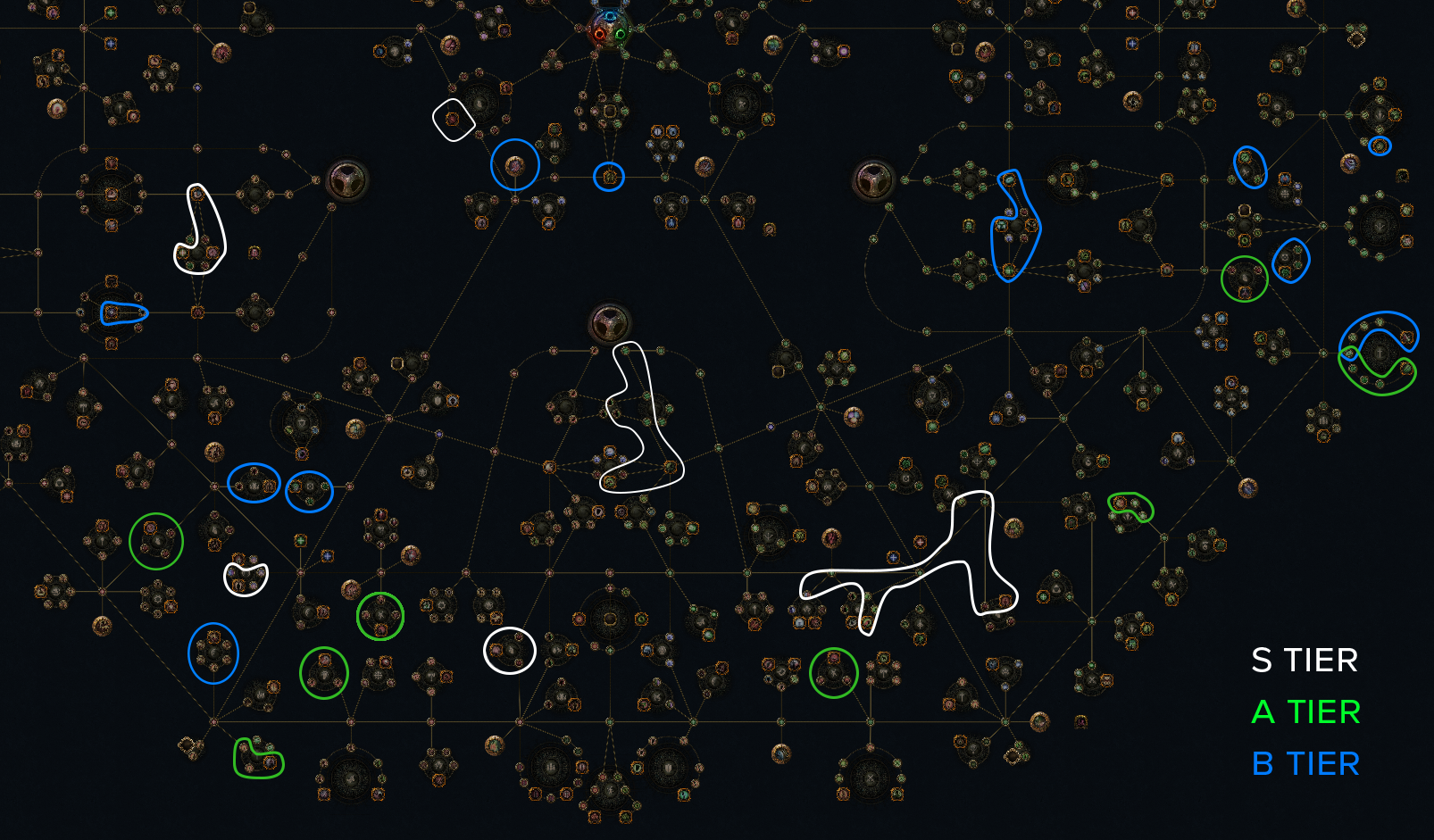