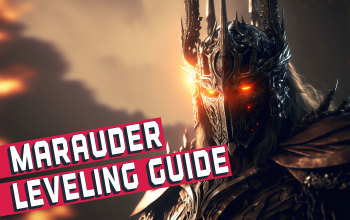 Marauder is a strong pick that has always been popular among all Attack-based builds. Berserker is an extremely powerful class that enhances Rage, Warcry, and overall Attack Damage mechanics which results in a lot of damage. Chieftain is an equally good class for when you want to play a Physical-to-Fire conversion Attack build. It's quite tanky, and great with Slam-type Attacks, or Attack Totems. Juggernaut is a tank that mitigates Physical Damage and has quite good Life Regeneration, it also synergizes very well with Endurance Charges.

This guide will cover all the basics for leveling with a Marauder that uses a two-handed Weapon Attack. It's the most popular weapon type due to its damage and no need for a shield, at least not that early into the game. For an Attack, we've selected Boneshatter, and Slam attacks like Sunder or Ground Slam, but you can use any other attack you're accustomed to, it hardly matters. In the section below we will cover all upsides and downsides of each Skill so that you can choose the one you like the most. We also heavily recommend using a 2-handed Axe as there are a lot of passives that would improve this particular type of weapon in the bottom-left corner of the Passive Skill Tree. The type of damage you will deal is purely Physical, or Fire. That depends mostly on your Ascendancy - Chieftain is the class for Fire Damage. The Weapon will be very important - remember to use vendor recipes for increased Physical Damage, or buy some of the Unique Axes we will recommend later. Due to being Melee, you're required to stay a bit closer to the enemies which slows your clear speed and makes you more vulnerable in most boss fights, that's why movement speed is very important - use decent Boots, Quicksilver Flask, and Onslaught buff whenever you can. Art of the Gladiator and Versatility notables are also very good. At first, you will take the Resolute Technique Keystone to always Hit and not to worry about Accuracy Rating, Critical Strike is good after level 70 or so. Your defenses are Armour, Maximum Life, Life Leech, and Endurance Charges in some cases. This technique can carry you to red maps.

What we recommend to start with is Ground Slam that you can choose after defeating Hillock, but you can pick Molten Strike too. Ground Slam is better against multiple enemies, but Molten Strike is also quite good if you connect it with Ancestral Call Support. At level 28 you can start using Earthquake or Boneshatter. Once again - one is a Slam and the other is a Strike, so pick whatever you're more comfortable with. If you want to pick a Chieftain, convert all your damage to Fire, otherwise, we recommend opting for Physical Damage only with Berserker and Juggernaut.

Boneshatter is a short-range Strike Attack that is very similar to the default Attack, it's no good in its base form so to upgrade it you will need to link Ancestral Call Support to it and allocate Tribal Fury with the Mastery to target enemies further away. Boneshatter scales great with Attack Speed, as with each hit it grants a Trauma stack that makes you deal more and more Damage, but damages your character as well. With damage high enough you will be able to Stun, which would create an AoE effect improving clear speed. It's a great choice for a Berserker or Juggernaut, but as a Berserker, you will be more vulnerable to self-inflicted damage, so be sure that you can Leech Life. Here we recommend going full Physical Damage, but with Avatar of Fire and Chieftain's Ngamahu Keystones you can easily convert 100% of this Physical Damage to Fire. Still, Chieftain is not the recommended class for Boneshatter.

Earthquake is a basic Slam Attack that creates an Earthquake dealing AoE Damage around the character. It has a few phases making it perfect for stationary bosses. If you don't like this effect and prefer instant damage, use Sunder, or Ground Slam for a wider angle but shorter range. These Attacks are very simple and perfectly suited to be used alongside Warcries to Exert Attacks and make them more powerful. Here you also don't have to worry too much about Impale Chance, it's not very good with Slams.

For Mana-reserving Skills definitely use Herald of Purity for more Physical Damage (it can be later converted to Fire). War Banner is great with overall Physical Damage, but Dread Banner could improve your Chance to Impale (Impale is also good only with Physical Damage) and its effect. If you're a Chieftain that deals Fire Damage, pick Herald of Ash instead. Anger is too expensive, use much cheaper Blood and Sand or Flesh and Stone. To make the enemies near you take increased Physical Damage, use Pride. War Banner can be acquired in act 1, Herald Skills in act 2, Pride, and Dread Banner in act 3.

Other Skills that can improve your performance are Ancestral Totems for more Damage and Attacks Speed, Blood Rage for Life Leech and Attack Speed, and Leap Slam for mobility. For a Guard Spell, you can use Molten Shell or Steelskin. Vulnerability would be the best Curse for Physical Damage-dealers, but Flammability is good for when you deal Fire Damage. If you can generate Rage, start using the Berserk Skill. These are all available through acts 1 to 4.

You will need only red and green sockets on your gear. Be sure to avoid gear pieces with Energy Shield as these are often skewed to roll more blue sockets. Tabula Rasa is the sound solution to any of these issues. New Skill Gems are unlocked by entering a new Act and completing a quest, some of them can be granted as a reward but there is no need to pay attention to that, these are extremely cheap. In Act 6 you will be tasked by Lilly Roth to complete a quest, by doing so you're granted access to all Skill and Support Gems available for any class. It will also unlock her shop in your Hideout for every new Character you make in the same League.

An example of a final setup for a Physical Damage dealer: Boneshatter, Brutality, Ruthless, Melee Physical Damage, Close Combat, and Fortify. Note that only two sockets should be green, the rest are red. These colors can be achieved easily on an Axe or Body Armor with Armour or Armour mixed with Evasion. If you're a Chieftain, use Added Fire Damage and Elemental Damage with Attacks instead of Brutality and Close Combat or Fortify.

Physical Attack Damage is always your top priority, so be sure that you have a good weapon. We recommend checking for a new one each time you enter a new act, use Essences, or vendor recipes to get the highest numbers. The higher the Item level, the higher tiers of modifiers it can roll, which means more damage. Even if you deal Fire Damage, it's still converted from Physical. Besides that, look for Maximum Life and Elemental Resistances, nothing else is really as important. Movement Speed on boots will be of use. Armour will come from Determination and inherent items' modifiers. That's basically it.

Proper Flask Setup makes Leveling much quicker and easier. Try to get 2 Quicksilver Flasks so you can have at least one active. Silver Flask increases your damage and mobility. Granite Flask is especially useful once you step into Act 5, as there is a very noticeable spike in Physical Damage dealt by the enemies. Lion's Roar Granite Flask can be used as soon as level 27 and is suitable for most of the end-game builds, but only if you're dealing Physical Damage. 20% Quality on each Flask is an easy way to prolong their Duration.

To successfully create the Passive Tree for a Build, you have to consider most of the Passive Clusters for a given build, choose a few of them, and make an optimal path to allocate most of them in the least amount of Passive Skill Points spent. Here, we showcased the best Passives that a two-hand Axe-wielding Marauder can get. S-tier Passives are great in most cases, and A-tier ones are more specific - these might suit only a specific type of build, restricted to Physical, Fire, or Projectile Attacks. B is a tier with less useful passives that are to be picked later, or not at all. If you're using Endurance Charges, go for the nodes for extra Maximum Endurance Charges. Jewel Sockets are good in the late game. We allocated Resolute Technique, you won't deal Critical Strikes, not during leveling phase.