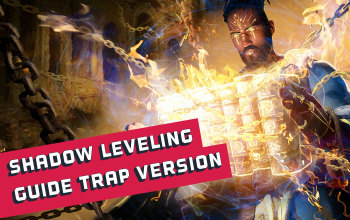 Traps allow you to cast Spells by proxy, much like Totems, but the difference lies in the way in which it occurs. Totems cast Spells continuously, while Traps do it once. You also place more Traps at the same time and stack them up for a big damage burst once an enemy enters their activation range. Traps can be connected to basically any non-channeling Spell in the game via Trap Support, but most players use the pre-made traps to save a socket. Seismic Trap, Explosive Trap, and Ice Trap are some of the most popular choices for Saboteurs.

This Guide aims to help you with the progression from the first Act up until yellow or red maps, at this point you'll be able to transition into the final stage of any desired build. Traps are some of the best tools to do so, especially when used by Saboteur, one of Shadow's ascendancies. It has many Keystones dedicated solely to improving Traps' Damage, Throwing Speed, AoE, and Cooldown Recovery Rate. What's even better, the passive skill tree is abundant with nodes and clusters serving the same purpose, and almost all of them are located very close to Shadow's Starting location. The build requires no unique items, whilst the rare ones are common and soundly priced. It's one of, if not the most popular build archetype for the league starter builds. The definition of Traps might sound like a clunky and unwieldy archetype, and to some extent it is. Nevertheless, Traps are not as bad as their specification sounds, you can throw them around at the same speed as you'd Cast any Spell and move forward. It creates a short window of opportunity for enemies close by to Hit you, but this issue can be mitigated by Born in the Shadows Keystone combined with Auras and Skills for a high Evasion Rating, making you exceptionally safe in the process.

There are a few options to choose from and a few more variables to consider when picking the right Starting Skill. All of the Traps presented here can be used indefinitely, there is no need to switch between them, and each one has its own merits. Explosive Trap is the first Trap available, it deals mixed Fire and Physical Damage. At level 12 you're free to switch to Lightning Trap. Level 28 grants you the ability to use an Ice Trap or Seismic Trap - the two most popular choices in recent years.

Explosive Trap deals Physical Damage, half of which is converted to Fire. It can be used with Added Fire Damage Support which is also available at level 1 and is very fitting. It deals relatively low damage on its own, but the initial Explosion is followed by a number of smaller ones with result in satisfying damage. It's good for dealing with bosses. With some additional Skills, it will grow stronger as it has the advantage of dealing converted damage. If your future plan is to use a Fire-oriented Trap, using an Explosive Trap to level up first is definitely the best course of action.

Use it with Herald of Ash for a vastly improved clear speed and damage. To improve your Fire Damage use a Flammability Curse, and a Wave of Conviction to cause Exposure, supported by Combustion to penetrate even more Fire Resistance.

Lightning Trap is an alternative choice that distinguishes itself by its very large Area of Effect, upon activating it fires multiple Projectiles in all directions which are able to Hit opponents far away. It's the best option if your priority is fast clearing, but keep in mind that it's really good only after getting an extra Pierce for these Projectiles. Lighting Trap also has the Vaal variant which can be used in addition to the Lightning Spire Trap at level 28. These are stationary spires that deal Lighting Damage around them, it's the same damage type as the Lightning Trap and so it will be as effective as your main setup. It fixes the otherwise poor single-target damage.

Use it with Wrath Aura for more Lightning Damage, Conductivity Curse, and Hydrosphere to reduce the Lightning Resistance of your enemies.

Ice Trap is one of the best Traps due to its Cold Damage which is able to Freeze and Chill, that is a very reliable safety feature that renders this Trap the best choice in a long run. It's a well-rounded Trap with a medium-sized Area of Effect, which can be upgraded by improving the Throwing Speed or linking it with Cluster Traps Support Gem. Starting on the right side of the passive skill tree is very helpful in this scenario due to the abundance of Cold-related nodes located there.

Seismic Trap is the most popular choice despite the recent nerf it has received. It's a Duration Trap that continuously deals damage to all the targets around it with powerful Physical Hits. It has very poor clear speed, that's why it's always used alongside Exanguinate Spell turned into a Trap via Trap Support. With two setups like this, you're well-equipped to deal with any type of content in the most optimized manner. You can then very easily grab some Spell Poison nodes on a passive skill tree and equip specific unique items for mixed damage build that melts bosses with its ramping-up Poison and added Chaos Damage.

Herald of Agony should be used to gain an additional chance to Poison, and for a Curse, it's for the best to pick Despair - it's great with Poison Damage. Also, make sure to have a source of Withered debuff.

During the leveling process, you will need to, at some point, gather more defensive features. The most common solution is to gain Evasion via Grace Aura and Defiance Banner, which also grants Armour. It synergizes well with Born in the Shadows Keystone which Blinds Enemies. The second Aura to be used is Determination for more and increased Armour. Skitterbots are nearly-mandatory Skill due to the damage and utility bonuses. The above-mentioned Aura and Herald Skills for specific builds should fit in here too. Having just three expensive Auras up at all times would be extremely hindering as even with Charisma and Influence notables you're left with almost nothing to cast your Spells with. Get more Mana Reservation Efficiency from items or make a choice to get rid of some Mana-reserving Spells. Remember that you can get a discount on most of the Auras and Skitterbots from certain Masteries.

You're also supposed to use a Movement ability, which can be Dash, Flame Dash, or Frostblink. A Guard Spell - Steelskin, or Molten Shell if you're using Determination Aura. One of the Spell setups should be linked to the Arcane Surge Support to grant you the buff for more Spell Damage and Mana Regeneration. We recommend linking a Spell that causes an Exposure with Hextouch Support, Curse, and Arcane Surge Support. Bear Trap is another skill that should be used in all of the Trap Builds - it increases Trap Damage and reduced the Movement Speed of enemies.

With every new Act, you will unlock new, more potent Support Skills so your setup will change accordingly. Keep in mind that different setups require different Colours. Fire Damage is associated with red, so if you're playing Explosive Trap, seek items with Armour to have a much higher chance for red sockets, where you can put your red Support Gems. The majority of your sockets will be however green, so the items with Evasion are always suitable. Remember that some of the Support Gem used early on can, and often should be later swapped for more potent ones. Multiple Traps Support is worse than Cluster Traps Support, but it's available earlier. We have presented four setups for four different builds - Explosive Trap, Lightning Trap, Ice Trap, and Seismic Trap with Exsanguinate. You're interested most likely in only one of these.

New Skill Gems are unlocked by doing specific Quests during the Campaign, either as direct Quest Reward or indirectly by unlocking the possibility to buy it from Vendor, most of them are on the way to the next Act anyway, but Library one in Act 3 requires extra effort. You will gain access to every Gem regardless of your Class in Act 6 by doing Lilly Roth's Quest. Doing so will also unlock her shop in your Hideout for every new Character you make in the same league.

Act 1: Once you arrive in Town, talk to Tarkleigh to get Freezing Pulse Skill Gem. It is a solid Skill that will serve you well until you get access to Wintertide Brand at the end of Act 1.

In this Act, you will gain access to the following Skills: Freezing Pulse, Wintertide Brand, Steelskin, Flame Dash, Clarity, Frostbomb

Traps are a lot like any other Spell builds so when searching for rare items, seek mostly bonuses to your Spell, Elemental, Physical, or Chaos Damage. A lot of these can be found on regular Rare Wands, Daggers, or Scepters. Trap Throwing Speed is uncommon and you won't need it that much. For defenses, seek Maximum Life and Elemental Resistances at first, then get more Evasion Rating. You might also want to invest heavily in Spell Suppression Chance, Armour, and maybe even Energy Shield. You won't need any Unique Items, but Tabula Rasa would be extremely beneficial, it'd get you more damage right from the start.

Proper Flask Setup makes Leveling much quicker and easier. Try to get 2 or 3 Quicksilver Flasks so you can have at least one active at all times. Granite Flask is especially useful once you step into Act 5, as there is a very noticeable spike in Physical Damage dealt by the enemies, but you can also use Jade Flask to try to avoid this damage. Remember that you can use Mana Flask if you struggle with Mana Regeneration. Atziri's Promise is great with almost any build, just be sure that you're not using Brutality Support alongside it.

The Passive Skill Tree is the most intimidating part of the game for new players, the game offers little to no guidance on how to allocate passives properly. Fortunately, it is rather easy to create a skill tree for Traps. You can highlight the passives with "trap" in them and just go there. Besides Trap nodes, you will also need to seek Maximum Life, Evasion Rating, and Spell Suppression - the core defensive layers every Saboteur should have. If you've chosen Seismic Trap with Chaos Damage, your passive skill tree will differ from that of Elemental-Damage-oriented trapper - Shadow's starting location is full of Chaos Damage and less so with Elemental Damage, but that's not an issue. Elemental Damage Traps are suited for Critical Strikes instead. Remember that Traps are Spells (mostly) and will benefit only from Spell modifiers. 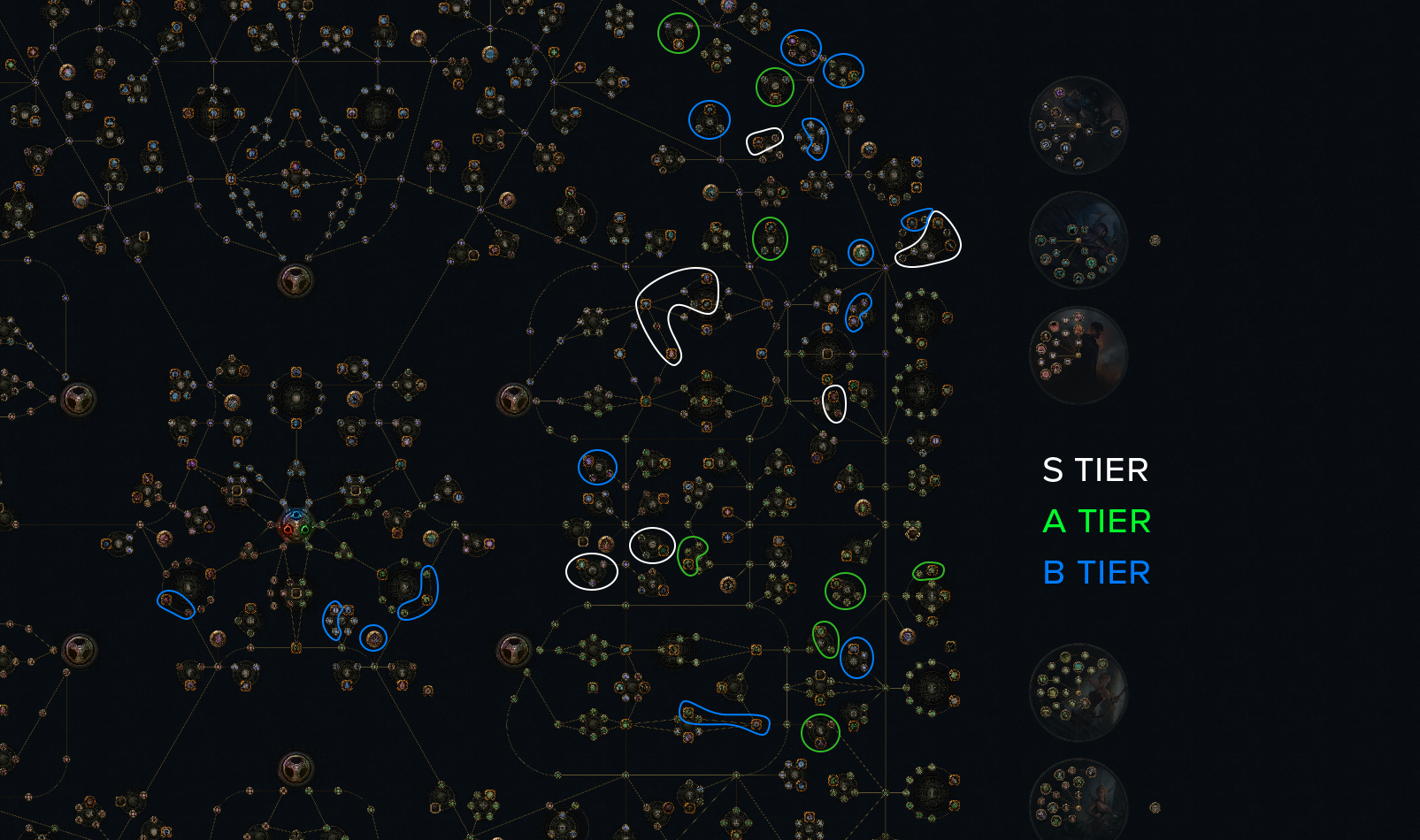