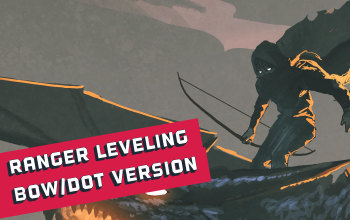 Ranger's Raider is the best example of a rapidly-moving-and-attacking character archetype - perfectly suited for farming, quickly progressing through a map, and one that's able to finish the leveling phase in no time. The Pathfinder sub-class also has some virtues, mostly Flask-related, and it's not as good as a Raider, but still decent. Wielding a Bow and using ranged attacks issue an immense advantage over melee characters as you won't have to approach enemies. One of the most popular ranged skills early in the league, Toxic Rain, fits here like a glove.

This Guide's goal is to prepare you for the endgame content while starting with no items - it's how it usually goes at the start of a new league. Toxic Rain is a unique skill, it fires a payload arrow into the air to land at a targeted location. The arrows then create spore pods lasting a few seconds, dealing Chaos Damage over Time to surrounding enemies - it is the main way in which the damage will be dealt. The most important stats to look for will be the ones increasing Chaos Damage over Time, Skill Effect Duration, and Attack Speed - this way the spore pods will last longer and there will be more of them. Another great thing about this build is that you don't need any Accuracy Rating - the spore pods are guaranteed to spawn, and the Attack Damage of your weapon is also not an issue as the damage comes not from the attack itself but the secondary effect that follows it. A good bow for almost any attack-based build is usually immensely expensive so that's definitely a big advantage. As for the defensive layers - you will be using Spell Suppression Chance and Evasion Rating to protect your rather unremarkable Life Pool. Remember that it is not a very tanky build and the distance you're keeping from your enemies is the primary defensive mechanics, a luxury that melee characters lack. Toxic Rain Raider is also one of the starter builds that can be kept and expanded on later in the league, it's very good even against the endgame threats. You can also use the Raider character for many other builds if you wish to switch to another, it's one of the most popular classes in the game. The items needed to keep up with content will progressively grow in value, but the makeshift economic gear should keep you alive even when fighting pinnacle bosses.

Toxic Rain is available at level 12, so before you reach it you will need to use something else. Fortunately, at this stage of the game, it won't really matter what Skill you're using as all of them are sufficiently good. We can recommend the Caustic Arrow - it's somewhat similar to Toxic Rain and can be used even later on in some specific cases. Both of these Deal Chaos Damage over Time. Having a Bow allows you for a secondary six-link Gem setup alongside the one on Body Armour, and as you probably won't have it linked all the way up until much later into the game, it's still important to keep in mind that the second setup can be used for Focused Ballista Totems firing the same Toxic Rain with some added utility potential. Deploying these Ballista Totems to deal damage alongside your character improves your damage during boss fights, and applies a stackable withered debuff, increasing your Chaos Damage further. For Auras you will use Grace and Malevolence, and for a Curse - Despair.

Toxic Rain fires a number of arrows into the air which then lands and creates a spore pod that explodes after some time. You don't really care about the initial impact or final explosion but the middle part, when the pod deals Chaos Damage over Time. Note that it is no Poison Damage - Poison is an Ailment that has to be caused by a Hit. You don't deal any Poison Damage, as you will rarely Hit anything and your Chance to Poison should be 0%, this is just Chaos DOT. The spore pods' damage can overlap on a single enemy which is rare, most skills prevent this "shotgun" effect, but here it is allowed. This is why the Area of Effect, the number of Fired Arrows per Attack, Attack Speed, and Skill Effect Duration are very helpful. If the boss is stationary, it lets you quickly overwhelm it with the number of spore pods.

Ballista Toxic Rain is a tool you can use later, after you start noticing your damage against single targets could be improved. The Ballista Totem Support Gem allows you to link any Projectile Attack to it and have it fired from a Totem. This way you can place a few of these and continue attacking while the Totems will do so as well, using the same Attack, which is Toxic Rain. We recommend equipping it only after you can afford an extra 5-link setup on a Bow or Body Armour, and linking it with Focused Ballista Support too, which is available to use only after level 31 - that's act 3. It will also be linked with Withering Touch Support Gem to apply Withered debuff - it applies a 6% increased Chaos Damage taken and stacks up to 15 times resulting in a 90% increased Chaos Damage taken from all sources.

These are basically the only Skills you will use regularly, but you still have three four-socket setups for other Skills. One setup will be used to host Auras - Grace for increased Evasion, Malevolence for increased Damage over Time and Skill Effect Duration, and possibly Defiance Banner if you can afford it. Another setup can be a home for movement skills such as Dash or Blink Arrow, Withering Step or Phase Run, and Blood Rage. You will also be able to fit the Guard Spell, cast automatically after taking some damage, and a Curse.

When scavenging for items seek ones with predominantly green sockets as most of your Gems are green, these are the items that grant Evasion which is also needed. It'd be easier to equip such items as you wouldn't need any Attribute other than Dexterity, which is the only one you will have a lot of. Bows are always skewed to roll with mostly green sockets. Four-link items are available at item level 25, five-links at 35, and six-links at 50. The item level corresponds roughly to the character level.

New Skill Gems are unlocked by doing specific Quests during the Campaign, either as direct Quest Reward or indirectly by unlocking the possibility to buy it from Vendor, most of them are on the way to the next Act anyway, but Library one in Act 3 requires extra effort. You will gain access to every Gem regardless of your Class in Act 6 by doing Lilly Roth's Quest. Doing so will also unlock her shop in your Hideout for every new Character you make in the same league.

There are only a few unique items that are exceptionally good for this specific build, but none of them are mandatory. You should generally aim for high Attack Speed and Chaos Damage over Time on your weapon, while all the other gear pieces can be used for their defensive values - Maximum Life, Elemental Resistances, Evasion Rating, and Spell Suppression Chance. Spell Suppression and Evasion can be found on the Evasion or mixed Evasion bases (the ones with green sockets). During the very first acts seek only Maximum Life and Resistances as these are most needed. You might also find Intelligence and Strength useful as some of your Gems will require these Attributes. You won't find a lot of them on the skill tree alone. After reaching a high gem level of Toxic Rain, try to get a six-link bow with local modifiers that would increase the Gem Level of Toxic Rain and Chaos Damage over Time even further.

Maximum Life on your Gear is a nice thing to have, but it is not important, most of it will come from your Levels themself. Armor or Evasion Rating should be covered by your Auras. That leaves only one form of Defense you will need to get on your Rare Items: Elemental Resistances. It would be best if you aimed to have at least 60% Resistance of each Element, excluding Chaos. To help with that, you should use Essences found during the Campaign, and the Crafting Bench in your hideout. Use the low-tier Crafts, as they are cheap and effective, while high tiers will also raise the Required Level to wear an Item.

Proper Flask Setup makes Leveling much quicker and easier. Try to get 2 or 3 Quicksilver Flasks so you can have at least one active at all times. Jade Flask is especially useful once you step into Act 5, as there is a very noticeable spike in Physical Damage dealt by the enemies. You will probably need one Mana Flask if your Mana Regeneration Rate doesn't allow you to Attack continuously. 20% Quality on each Flask is an easy way to prolong their Duration.

To successfully create the Passive Tree for a Build, you have to consider most of the Passive Clusters for a given build, choose a few of them, and make an optimal path to allocate most of them in the least amount of Passive Skill Points spent. Here, we included a Skill Tree for a Toxic Rain Ranger - more specifically Raider character. Nodes labeled as S-tier are great and should always be picked - the large S-tier blob with multiple passives in it is your starting route packed with the best nodes you can find. A-tier passives shall be allocated later on, or perhaps not at all - that depends on your route. Passives described as B-tier should be picked after allocating all the S-tier ones. They're good but less potent, and forming a path up there costs a lot of points. 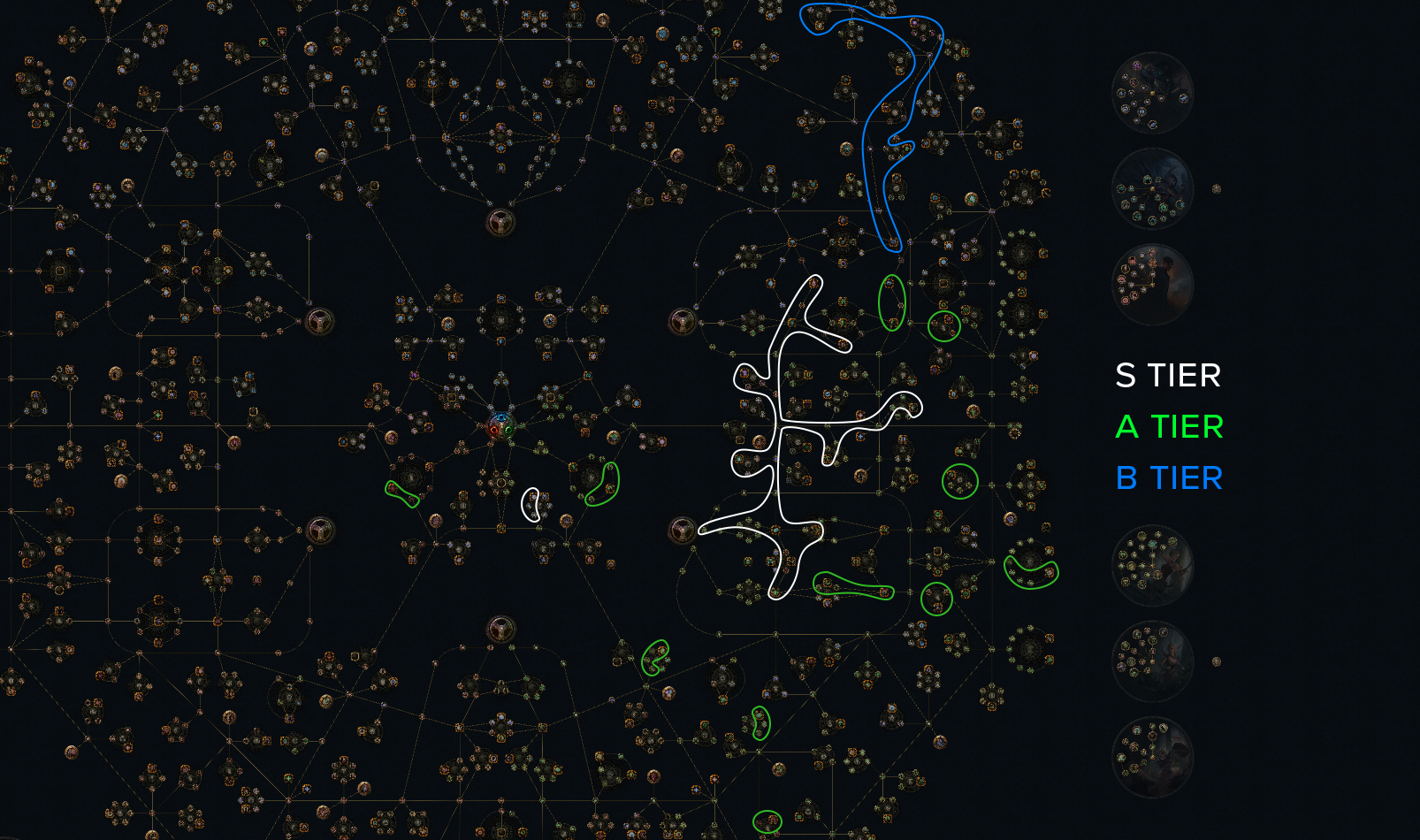