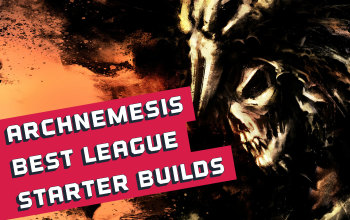 Best Starter Builds for Siege of the Atlas and Archnemesis League

Complete list of our top recommendations for Archnemesis and 3.17 League Starter builds

Siege of the Atlas is the newest content update that primarily focuses on endgame content - making the Atlas progression much more challenging and interesting. With the introduction of Patch 3.17, you will be able to face two new endgame Bosses that are threatening to devour Wraeclast. These are the Eldritch Horrors: The Searing Exarch and the Eater of Worlds. On your way you will also have to deal with their powerful subordinates, the Black Star and the Infinite Hunger, which might appear to play a similar role as Elder and Shaper Guardians, as well as the Shaperslayers. On top of those new Bosses, a new Atlas system is getting introduced with a new Atlas Passive tree, which should offer a completely new progression experience.

As usual, on top of new content, we are getting a major rebalance of a lot of Skill and Support Gems, new interesting or reworked Unique Items, and new Eldritch Crafting options. Patch 3.17 mainly focuses on Spells, with a lot of them getting their damage significantly buffed to make it more viable. It would appear, that Spell Casters will be a much more archetype now, even though their usually lower mobility wasn't addressed. We are also going to see upgrades to Bows, that are mainly about improving the damage of Bow bases. While this will have some impact on your potential damage output, it would seem that the meta will be nearly unchanged, with Bow builds being still extremely expensive, but hopefully, this type of builds will be more accessible for players dealing with low and mid Tier content.

As usual, we have decided to make a list of our top recommendations for League Starter builds for Patch 3.17 and the Archnemesis League. Some of the more popular Starter builds have received nerfs, like Toxic Rain or Seismic Trap for example, but they don't seem to be impactful enough to make them any less powerful early on. Because of the massive DPS increase to plenty of Spells, you can easily assume that most of them will work just fine during the campaign. If you pick a Spell that was quite popular earlier, and now it has buffs listed in Patch Notes, you can easily expect it to be a decent Starter - this will apply to quite popular Spells like Arc, Exsanguinate, Ice Trap (and Traps in general), Blade Blast and many more. Below you will find the actual list with a brief description of each of the builds and an explanation of why we expect them to be good in 3.17. All corresponding Guides will be updated shortly after Patch goes live.

BEST STARTER BUILDS FOR PATCH 3.17 AND THE ARCHNEMESIS LEAGUE

If you have any suggestions about other interesting Builds and/or Starter Builds for the Archnemesis League we would love to hear your feedback! The patch introduces a major rework of many Spells so there might be some hidden jewels in there that we simply don't notice yet! Obviously, we will be updating all our Guides over the course of the Archnemesis League to match the current Patch and Siege of the Atlas update