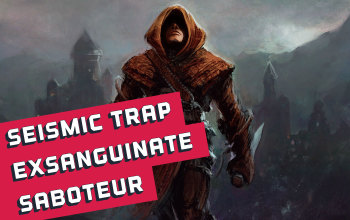 Seismic Trap is one of the few Duration Traps, that once placed stay active dealing damage to the surroundings. Due to its nature of being the most effective against stationary targets, it's not that great with fast map clearing - for that another there is another setup with Exsanguinate. Exsanguinate as a Trap shares a lot of similarities with Seismic Trap, these are both Physical Spells (Exsanguinate needs to be linked with Trap Support). Additionally, Exsanguiate is great for quickly killing weak enemies - the tendrils instantly seek the nearest enemy and chain to another. Saboteur is the obvious choice - it has great synergy with Traps and offers some great defensive layers, with Pyromaniac you're immune to Ignite and Shock and have a lot of Mana and Life Regeneration, with Born in the Shadows you're immune to Blind, nearby enemies and enemies you hit are Blinded, which makes them deal less damage.

As many of the Physical Spells builds, this one uses two Cold Iron Point Daggers for 6 additional Levels for your Physical Spells - that really improves your DPS. There are little to no Unique Items that are mandatory - the previously mentioned Cold Iron Point is too good to not pick it, The Devouring Diadem, Tinkerskin, Replica Cheap Construction, or Slavedriver's Hand could suit this build and are worth your consideration. The build is Life-based, cheap, and simple - it's a great League Starter. Your total Maximum Life should be oscillating around 6k with particularly resistance to Hits. The dual-DPS setup makes the build good in both situations - dealing with bosses and fast map clearing. It's currently one of, if not the best Saboteurs builds out there.

Patch 3.16 introduced some new ways to increase your Maximum Life, Damage, and shifted your defensive configuration to rely more on Evasion Rating, Spell Suppression, Energy Shield, and a new Keystone available for everyone - Ghost Shroud. The build itself hasn't changed much - we removed Fortify on Whirling Blades and replaced it with Lifetap Support, Fortify has its effectiveness now scaling with the melee damage. The Passive Skill Tree is obviously different from the previous one due to the changes, but the core framework remains the same. Evasion Rating is also more valuable - try to seek items with this stat alongside Maximum Life.
In Patch 3.17 the Seismic Trap Single target damage got slightly nerfed while its AoE has been improved - it won't affect the build in a major way.

Use the Exsanguinate Traps to deal with packs of enemies - it's really great even in closed spaces such as Cells Map. Seismic Trap is used to kill bosses and the Rare enemies that are more resistant to your Spells. Place the Traps ahead of you as you go to clear the rooms, these will kill enemies before you will have a chance to see them. Use your Movement Skill to move faster and to dodge attacks. Assassin's Mark is the Curse that's the most beneficial, you can use it on Arcanist Brand. Steelskin is probably the best Guard Spell, but Immortal Call linked with CwDM is a popular choice too.

Use Explosive Trap, it's good for a start since it can be used at level 1 and shares similarities with other Physical Spell Traps so you don't have to deviate much from your intended Passive Skill Tree. Don't use Seismic Trap without any secondary Trap Skill, it's too slow by itself, you can start using Exsanguinate linked with Trap Support early on, later the Trap Support should have a form of an Affix on your Rare Gloves. Cold Iron point Requires Level 62, before that you can use any weapon that increases your Spell Damage, you can use Vendor Recipes for that, base Attack Damage of a weapon is not important.

32 Points Skill Tree
head for the great Trap Cluster Jewel, take some Life and Crit nodes on the way

The gear consists mostly of Rare Items making it flexible in terms of its price. As a Shadow, a lot of your defenses will rely on Dodge and Evasion, but the most important stat here is Maximum Life and Elemental Resistances. Pay close attention to your Strength, 155 of it will be required and it's scarce on your side of the Passive Skill Tree. Gloves will be the most important Rare gear piece since Shaper's influence allows you to have additional Support Gem links there for faster clear speed. It is recommended to use two Large CLuster Jewels - it will increase your damage. Look for stats that would increase your Trap, Spell, or Physical Damage, but only for Spells, you won't use any Attacks to deal damage.