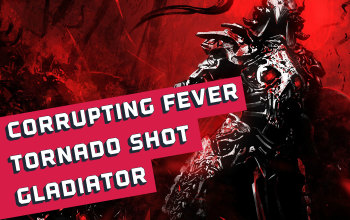 It's a build very similar to the one we've already covered, it was a Corrupting Fever Scion Ascendant Build. The premise of the build is strikingly similar so if you played id before, you will have no problem adjusting to this version. Most players switched from Ascendant to Gladiator due to much more potent and accessible DoT Passives and mods, new Iron Will, and no need for Unique Items. Gladiator is a class specialized in among other things - Bleeding and Physical Damage over Time. Corrupting Fever causes enemies to take Physical DoT by applying stacks, one with each Hit, of Corrupted Blood on them, ten of these being the maximum number of debuffs. To apply as many hits as quickly as you can on a large number of foes consistently use Tornado Shot - Ball Lighting and Sire of Shards would be better at this, but by equipping a Rare Bow you can get a lot more Damage over Time, Physical Damage, and Attack Speed.

The most important for your DPS is the Level of the Corrupting Fever Gem - you can increase it by starting with a level 21 Gem, and then increasing the level by the mods on your Amulet and Bow, and Empower Support. Your amulet will play another very important role - it needs a mod that makes your Skills cost no Mana while Focused, otherwise you won't be able to activate Corrupting Fever at all. The build has a moderately high Maximum Life - 5 to 7k, Armour to prevent over half of the incoming Physical Damage, Unwavering Stance, and the Resolute Technique. Your Damage is high enough to deal with all the content in the game, and Gratoitouas Violence helps with clear speed immensely. The build is expensive - although it doesn't need any specific Unique Items, the Rare ones are costly.

As you enter a map, use your Focus ability to take no damage from Corrupting Fever, and activate it - it should last indefinitely for the rest of the map. The build plays like a regular Tornado Shot build - try to stay at a safe distance, away from your foes, and shoot them until they die. Use Flame Dash to dodge and move faster, Enduring Cry to regenerate your Life in times of need, and Blood Rage for Life Leech, Faster Attacks, and Frenzy Charges. Your Guard Spell is Molten Shell as it scales well with Armour, use it as frequently as you can. Have a ring with Vulnerability Curse on Hit and use Auras such as Pride, Malevolence, Herald of Purity, and War Banner. Most of the Skills you will end up using shouldn't cost any Mana due to Lifetap Support.

Start with a Physical Attack that's preferably ranged because with your First Ascendancy you will pick Blood in the Eyes Keystone. Splitting Steel is a great candidate for an Attack to start with, it requires a Sword or an Axe. You will Swap to a Bow much later after you already have a decent one with increased Gem Level or Physical DoT. Keep your Elemental Resistances High and the early stages should be a breeze. You can use Essences of Contempt for added Physical Damage, or Essences of Zeal for Attack Speed.