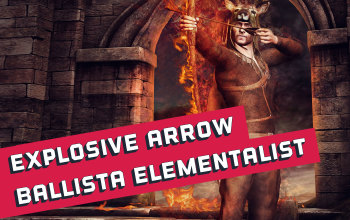 An Explosive Arrow is a Bow Attack that sticks the fired Arrow to an enemy and after a short delay of one second, or after it reaches the maximum of 20 stacks of Arrows attached to a single target - it explodes dealing AoE Fire Damage, and all the remaining Explosive Arrows are consumed. The more stacks you have, the higher the damage of the Final Explosion is, so prioritizing the rate at which you can Attack is very important. The usual way to achieve it is to get more Attack Speed, but for an Elementalist, the most efficient way is to Attacks via multiple Ballista Totems. What you have to keep in mind is that you have to apply 20 Stacks of Explosive Arrows before they Explode automatically - usually after one second, but that can be modified with Duration modifiers or Gem Quality itself - the regular Quality increases the Duration, but Divergent Quality reduces it (it's actually preferable because it also increases the number of maximum stacks by 0.2 per 1%). The Explosion Hit Damage is not important because it's an Ignite build that relies on Damage over Time caused by the aforementioned Explosion.

Elementalist is the go-to Ascendancy for Ignite builds - you have massively increased Ignite Damage and Chance to Ignite by Shaper of Flames, Mastermind of Discord, and Heart of Destruction. The Passives you want to allocate on your Passive Skill Tree are all over the place - you need Ancestral Bond on the top left, Dirty Techniques with Panopticon on the bottom, and Watchtowers on the bottom right. These will increase the Maximum number of your Ballista Totems. Allocate Keystones such as Elemental Overload and Elemental Equilibrium (you can't have added Fire Damage to Attacks). Get some generic defensive stats such as Life, Armour, and Spell Suppression. To get more Damage look for Attack Speed and Fire Damage over Time.

Use your Totems to deal Ignite Damage, there is a small delay as you have to wait for Totems to start shooting and then for your Arrows to Explode. Apply a Flammability Curse to lower Fire Resistance with a Hextouch Gem, it can be linked to a Trap which is also used to generate Frenzy Charges and trigger Elemental Equilibrium. To apply Combustion against more resilient opponents use Traps that don't deal Fire Damage - for example, a Lightning Spire Trap. Use Auras such as Precision for more Accuracy Rating, and Defiance Banner with Determination for Armour. Malevolence increases your Ignite Damage.

Starting with a Fire Spell would be wise as you can quickly get some Passives to help you with Leveling. Start to specialize in Fire Damage over Time after the first Lab. Pick a Fire Spell such as Fireball, Armageddon Brand, or Purifying Flame. At level 28 you will be able to use Explosive Arrow, get some Fire Damage, Maximum Life, and Damage over Time. Quickly allocate Ancestral Bond and start using Totems, then look for more Attack Speed and Accuracy Rating. Be sure that your projectiles don't Pierce targets, Arrows have to stop at the first enemy.

50 Points Passive Tree
Take Acrimony and Elemental Overload, respec Fire Walker and nearby nodes for they are no longer good with Attacks

87 Points Passive Tree
remove more points from the upper part of the tree to get to the Panopticon and Dirty Techniques, pick Elemental Equilibrium and Deadly Draw on your way there

The base duration of an Ignite is 4 seconds, you should apply a fresh Ignite every one second or so, so don't be hesitant to reduce the Ailment Duration or to make it deal Damage Faster, it's hard to make it less than even two seconds. Your primary objective is to get a 100% Hit Chance with enough Accuracy and enough Attack Speed so that 20 Arrows can be stacked in one second. After that look for Fire Damage over Time and Elemental Damage with Attacks. Do not add Fire Damage to your Attack - it will ruin your Equilibrium as the Arrows deal no Fire Damage, only the explosion they cause do. Instead, get a small amount of added Cold or Lightning Damage that can be found on many gear pieces and Jewels. Maximum Life, Armour, and Spell Suppression are your main lines of defense. Additional Gem Level affixes now can be found on non-influenced Amulets - that's great news because the damage scales really good with the Level of Explosive Arrow so try to find one that fits your budget. If you need more unreserved Mana you can lower the Gem Level of Precision - you can go as low as level 1 given that you source a significant amount of Accuracy from your gear.