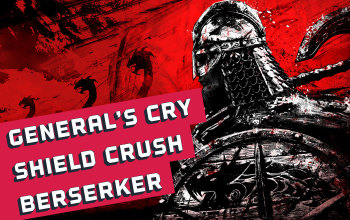 General's Cry is a Warcry Gem that's very different from any other of its kind, it summons Mirage Warriors from nearby corpses to perform an Attack of your choice. Link the Attack to the Warcry Skill Gem for it to work. You can summon up to 5 Mirage Warriors, which requires you to have 10 Corpses nearby and 25 Warcry Power - it can be guaranteed by constantly casting Desecrate. The skill of your choice is Shield Crush. Why Shield Crush and not Blade Flurry? it's cheaper to get more Attack Damage as it's based on the Armour on your Shield, which is easier to scale up than the Damage on your main-hand weapon. You can of course transition very easily to the Blade Flurry version as it's better but more expensive. You can check other General's Cry builds here: General's Cry Blade Flurry, General's Cry Shield Charge.

You want of course to play as Berserker as you rely on Warcry and Attacks. Pick Call to Arms to use your Warcry instantly - it won't interrupt our Cyclone which is used to spawn Corpses via Descrate so that you still be at your prime even during boss fights. You want to get the usual Physical Attack Damage nodes, easily found on the bottom of the Skill Tree, and then some Warcry Cluster and Masteries. Look only for Global Physical Damage modifiers as the damage is sourced from your Shield. Use Resolute Technique to always Hit early on, and after being able to afford a specific Brutal Restraint you can stop using it. As is the case with Physical Attack Builds, make use of Impale mechanics for more damage. It's a very tanky build with a lot of Armour, obviously, and some other defensives. It's supposed to be played as a starter build so it's very cheap.

The gameplay is simple as most of the time you spin using Cyclone to spawn Corpses with Desecrate and mash the low-cooldown General's Cry Skill button. Enhance your Damage with Blood Rage, Pride, and Dread Banner. You can further increase your Damage for a short time with Berserk which spends your Rage, and Ancestral Totems. As your Armour is high, you should take Determination Aura to have even more of it and mitigate 90% of incoming Physical Damage. Use Leap Salm as your Movement Skill and Molten Shell to reduce damage taken. Vulnerability is the best Curse you can cast manually or via Ring Affix.

Start with any Attack, such as Cleave, Sunder, or Shield Crush if you already have a Shield with a lot of Armour on it. At level 24 you can link it with General's Cry and proceed forward. Remember that your main hand weapon stats do not affect your damage unless it's explicitly stated that it affects your global damage. A common useful mod you can find is for example "Attacks have a chance to cause Bleeding". At Level 23 you can use Dark Seer, but don't use it unless you have a 100% chance to Hit no matter your Accuracy, use Resolute Technique Keystone to achieve this status. After getting Brutal Restrain (Nasima variant) you can transform one of your Keystones into Second Sight for much more Critical Stre Chance. Keep changing your Shield to one with more Armour from time to time, higher tier Armour mods are restricted by Item Level.

32 Points Skill Tree
Go for the Resolute Technique, it's good to level up with; after that go find more Life and Attack Damage

68 Points Skill Tree
Allocate Call to Arms and start using General's Cry; you should then allocate the three Warcry Clusters and get some more damage

Soul of Solaris 6% Physical Damage Reduction if there is only one nearby Enemy; 20% chance to take 50%  less Area Damage from Hits

Below you will find the recommended items for the build. Unique Items listed here are not mandatory, but you should prioritize getting them as soon as you can. Look for a way to get 100% of Crit. Chance and Hit Chance, later focusing on Crit. Multiplier and Added or increased Physical Damage with Attacks. You don't need Attack Speed. The defensive stats to look for are Maximum Life, Armour, and Elemental Resistances.