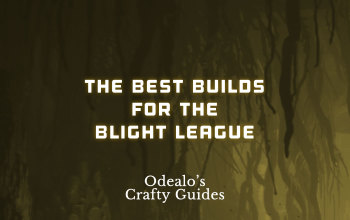 List of 5 best Starter Builds and 5 most interesting Builds to play during the Blight League in Patch 3.8

The Best Builds for the Blight League and Patch 3.8
including Top 5 Starter builds

Patch 3.8 and Blight League are starting soon and major changes to three most feeble build archetypes: Miner/Traper, Summoner, and the Poison archetype are being introduced. Necromancer, Saboteur, and Assassin classes will receive significant reworks, a lot of new Active and Support Gems are getting added, and major changes to those mechanics are being introduced. This is just natural that most of the builds listed below fall into those archetypes, and since most of you haven't played them recently (or ever), Blight League is a perfect time to do that. At the same time, Blight League mechanic is often referred to as a "Tower Defense" game, which makes it a perfect League for Totem users and Ranged characters with wide area coverage.

PLEASE NOTE: The following list is based on the limited amount of information we have received in the current Patch notes. We do not expect big changes to occur when new Unique Items and Passives get discovered, but if so, we will make sure to update the list accordingly.

Below you will find our recommended Starter builds for the Blight League. All of the builds listed below offer a very smooth transition to end-game content, and they will allow you to complete the Atlas and take down all the Bosses including Shaper and Uber Elder.

The Best Starter builds for the Blight League and Patch 3.8

We will appreciate suggestions and feedback that could help us improve our list and the builds listed. If you would like to share your thoughts about our work, let us know in the comments below.