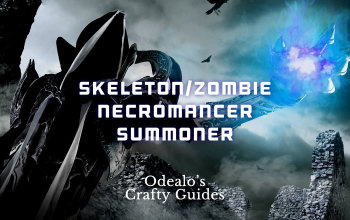 Patch 3.8 introduces major changes to Minion-related Skill Gems, Necromancer's Ascendancy class, and the entire Summoner build archetype gets a major rework. The major flaw of all Zombie/Skeleton builds lied in the Minions clunky behavior and how inconsistent their DPS is, lowering your clear speed and Boss farming potential. Removing those downsides were one of the main parts of Patch 3.8, putting this build in the highest Tier of builds. At the same time, this build requires no specific Uniques, making it a perfect pick for a Starter build as well.

You can also check our other Path of Exile builds in this article: Best PoE Builds by Odealo

This is a typical Summoner type of build that relies on your Minions to deal insane amounts of damage and protect you from threats. Summon Skeleton Spell is used to summon Skeleton Warriors which deal massive Melee Damage, and by using Feeding Frenzy Support Gem, we make them more aggressive, which increased the radius at which they detect enemies and your overall clear speed. On the other hand, Zombies are used as Meat Shields, which linked to a Support Gem that shares the same name, makes their behavior Defensive and causes them to prioritize enemies near you, with a chance to Taun them on Hit. To further increase our defenses we rely on high Life pool, Mind over Matter Passive, and Plaguebringer Passive. This build also offers quite high Physical Damage mitigation for a Witch character

The entire leveling as a Summoner is a piece of cake. This build relies on Skill Gems and Passives for the damage, so you shouldn't have any problems progressing through the campaign regardless of your equipment. Initially, this build may feel slow, so we suggest using Summon Raging Spirit initially, and switch to Summon Skeletons when you start mapping. Below you will find the recommended Gem setups for the leveling phase, and low-level Unique Items that are cheap and extremely useful on lower levels.

Below you will find the recommended gear for this Zombie/Skeleton Summon build. As mentioned earlier, it can be played with any rare gear, so you can replace any Unique item listed with pretty much anything you want.

We would also like to take this opportunity to invite you to visit our PoE Marketplace where you can buy and sell Path of Exile Currency with the use of real cash. Link to the Marketplace can be found on top of the page