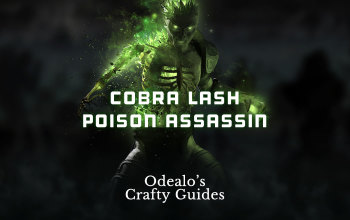 Cobra Lash, one of the newest additions to the game, is a Chaining Projectile-based Attack Skill which has increased Chance to Poison on Hit and a big portion of its' base damage converted to Chaos Damage. It appears to be one of the most potent Attack Skill in terms of clear speed, with poisonous projectiles flying all over your screen obliterating enemies. At the same time, one of Patch 3.8 main focus was the Assassin Ascendancy Class, which has received significant damage bonuses and an extra defensive buff; Elusive. Being squishy was one of the biggest downsides to Assassin's, and now with it being a thing of the past, we believe Assassin is going to be one of the most popular classes in the upcoming Blight League.

Cobra Lash Assassin is a Ranged build which relies on multiple projectiles Chaining between enemies and applying deadly Poison with each Hit. Assassins offer the highest possibly bonuses to Poison Damage and very high Movement, and Attack Speed bonuses making it an extremely potent map farming build. On the other hand, this build offers very solid defenses based on high Life Pool, Evasion Rating, Dodge, and the newly introduced Elusive mechanic. This build's damage scales really well in longer fights which makes it fully viable for all the Path of Exile's content.

Cobra Lash is perfect for leveling with the Skill Gem being available at level 1. It offers quite good clear speed early on, and after you Support it with Lesser Multiple Projectiles, you will be clearing areas in no time. You should prioritize Life and Elemental Resistances on your gear, as you will have limited defensive capabilities on lower levels. On the good side, you can follow the Skill Tree directly towards your end-game build, and you the same Gems during leveling that you are going to use later on. Below you will find the basic Skill Gems setups for Cobra Lash and several useful Unique Items, which if obtained, will make progressing through the campaign a piece of cake.

Below you will find all the recommended gear for our Cobra Lash Poison Assassin build. We have included core equipment, as well, as more advanced and crafted gear that will let you push this build to its maximum potential. Below each item, you will see the required minimum stats, as well as, optional useful affixes that should be added wherever possible.

Using this opportunity, we would love to invite you to visit our Path of Exile marketplace where you can buy and sell PoE Currency with the use of real money. The link to this section of our website can be found on top of the page or via a banner to the right.

If you decide to use this build for your own character let us know how it worked out! We will appreciate your feedback and suggestions on how to improve our builds and guides.