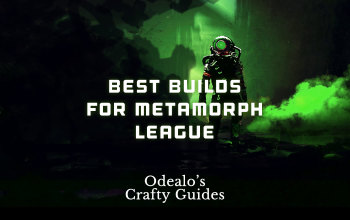 List of the best 5 Starter Builds for PoE Patch 3.9 and Metamorph League

The Best Starter Builds for the Metamorph League and Patch 3.9
including our predicted Top 5 End-game builds

The newest and biggest 2019's Path of Exile Expansion: Conquerors of the Atlas with the new Metamorph League are heavily oriented on two things - end-game Bosses and Bow-archetype builds. This kind of makes it clear what types of builds will be the most popular; not to mention the nerfs to Zombies, Spectres, Icicle Mines which were the most popular builds in previous Patch 3.8. Our first list consists of the best Starter builds for the upcoming Metamorph League and it's not a coincidence that two out of the five listed are based on the Ranger class which we expect to be the best. This is also intentional as they will both offer an easy transition to the predicted meta in 3.9.

Unlike the previous Leagues, you will want to optimize your build for Bossing - apparently, this is the main theme of the Conquerors of the Atlas Expansion, so clear speed and AoE are not going to be your main priority. You will need to focus on high single-target damage and maintaining decent defenses and we have several recommendations that will fit this style perfectly. All of the listed Starter builds not only will do fine during the leveling phase but will also give you the ability to take down most of the Bosses in the game.

PLEASE NOTE: The list of the best builds is based on the Patch notes and our predictions for the upcoming Patch. We will verify it over the course of the next few weeks, and all builds will be thoroughly polished when new Metamorph Items can be fully included.

Below you will find our predicted best builds for the upcoming Metamorph League and Patch 3.9. These builds are based on our assumptions on what will be the best way to take down the new Conquerors of the Atlas Bosses. All this build offer solid defenses and very high single-target DPS while maintaining decent clear speed to not slow you down when farming the Atlas. We may need to update the list within the first few weeks of the League when we will know more details about the upcoming encounters. Stay tuned

If you have any suggestions towards our listed builds, or you would like us to make a different build that for some reason may not be already available on our site, let us know in the comments below! We also appreciate constructive criticism - it helps us improve our content!