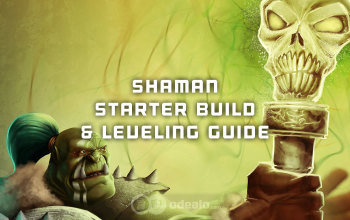 Shamans are Horde-only Class of Seers and Warriors that use the power of the elements to destroy their enemies and heal their allies. They are very versatile and can assume the role of a Healer, DPS, or even a Tank (especially at lower levels). Restoration Shamans possess a very rare, in Classic at least, AoE Heal ability in a form of the Chain Heal, which makes them a very desired Raid Healers. Elemental Shamans, while not the best as End-Game DPSs, can pull their weight in Raids. Enhancement Shamans, although not viable for Raiding, are very strong in PvP and have an ability to One-Shot their enemies with lucky Windfury procs.

Shamans are very capable Solo and Duo levelers, but their rather low mana pool slows them down a bit by forcing downtimes. They have access to the Ghost Wolf ability (from level 20) that gives them mobility advantage over most other Classes and their ability to Heal allows them to keep going until they inevitably run out of mana. While rather weak against multiple enemies at once, they are also perfectly capable of soloing level-appropriate Elites. Shamans are strong In Open World PvP as well and have the ability to kite enemies like no other class by using Frost Shock ability and interrupt spell casting every 6 seconds (or 5s with 5/5 Reverberation Talent) with their Earth Shock.

This guide will aid you and your Shaman on your journey to level 60; it will help you choose a Race, present you with an optimal leveling Talent build, point you towards Dungeons and Quests that award worthwhile Ranged Weapons, provide some tips & tricks, and more.

As most of you know, Shaman is an Horde-only Class in WoW Classic (Alliance got access to the Class in The Burning Crusade Expansion, with the introduction of Draenei, who were the only Alliance race allowed to become Shamans until the implementation of Allied Races in BfA). Out of four Classic Horde Races, only Undead can't become a Shaman.

Note: Please remember that a good Player will make all races work well, and a bad player will not get any better thanks to a Race choice. In other words - pick your Race as you please, because after all, Fun is the most important aspect of the Game.

Slow, Two-Handed Weapons are the best choice for leveling Enchancment as they work very well with his Weapon buffs and later with Stormstrike. A good weapon upgrade can shave off seconds out of your kill times, largely increasing your exp/hour, especially when grinding (you might even consider altering your leveling route and focus on mob-grinding, for some time, after you get your hands on a potent new weapon). Below, we present you a shortlist of Two-Handed Weapons that you should try and get during your leveling journey.

Note1: For the first bunch of levels only Two-Handed Weapons you can use are Staves, as Enhancement Shamans can't buy other Two-Handed weapon skills from Trainers and get a special Talent instead. If you follow our Talent progression, you will unlock the ability to use Two-Handed Axes and Maces at level 22, but you can get the Talent as soon as you reach level 20 (we recommend doing this only if you have a level 20 Weapon upgrade already).

Note2: Listed Weapons are not organized in a strict order and you don't have to go for every single one of them. The list is meant to be a raw guideline for Paladin's Weapon progression.

Note3: There are a lot more Two-Handed Weapons than those described. We have mentioned just the easy-to-get and quite essential upgrades. BoE items were excluded from the list, as there is a lot of RNG involved in getting them.

Your rotation will greatly depend on your level and will get gradually more complex as you progress through content and get access to more tools.

Tips and Tricks for Shaman leveling