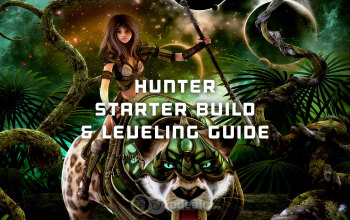 Hunters are ranged damage-dealers that rely on their loyal Pets when it comes to keeping their enemies at a safe distance. As a Class, they are easy to play and surprisingly difficult to master, as there are a lot of things that a good Hunter must learn and finetune (micromanaging Pets, Stutter Stepping, playing around Hunter's main weakness in PvP - a Dead Zone, etc.). Their high Damage output and good sustain, combined with their Pet companions, let them progress through levels at a pace unmatched by any other Class and even solo level-appropriate Elite Mobs without too much of a problem.

Hunters Excel in both Open World and Battleground PvP thanks to their high Damage output, surprisingly potent Crowd Control options, very high Range, and a Pat that can harass their Targets and be very annoying to deal with efficiently. Their main weakness in PvP is the so-called Dead Zone, which is an area around the Hunter between his minimal Ranged Attack and maximum Melee Attack ranges - between 8 and 5 yards around him (which means that Hunter can't attack Targets that are within that area). The Dead Zone can be exploited by experienced enemy Spell Casters and make Hunter's life rather miserable (but exploiting it well takes a lot of skill and is by no means easy). Their End-Game PvE DPS, while not the highest, is good enough to secure them spots in Raids when combined with their kiting and CC abilities that are simply necessary for some encounters.

This guide will aid you and your Hunter on your journey to level 60; it will help you choose a Race, present you with an optimal leveling Talent build, point you towards Dungeons and Quests that award worthwhile Ranged Weapons, provide some tips & tricks, and more.

The Best Hunter Races for Both Factions

Each Race has unique traits and abilities, some of which greatly benefit a Hunter, other - not so much. More competitive Players might even want to choose their Faction based on Racial traits of one of its member Races. We will take a closer look at all Races that can choose the path of a Hunter and determine which are the best for PvP and PvE.

A lot of Hunter's Damage comes directly from his Ranged Weapon, which means that it is the most important piece of his Gear. There are three kinds of Ranged Weapons that can be used by Hunters: Bows, Guns, and Crossbows. Here, we will focus on Bows, as they are the most common and easiest to get. Guns are also quite viable (especially if you level up Engineering quickly and craft yourself some Rifles), but they are rarer and upgrading them consistently can be problematic. If you are a Troll Hunter this is great news, however, if you roll as a Dwarf, you might think that you lose out, thankfully Gun Specialisation is not that impactful, especially when leveling. When it comes to Crossbows... let us just say that you might not see a single Crossbow before achieving level 60 (there are a total of 19 different Crossbows in Classic, while there are 101 different Bows and 85 different Guns). The other reason behind us focusing on Bows is the fact, that you need to raise your Weapon Skills, which makes switching between Ranged Weapon types problematic.

Note1: Listed Ranged Weapons are not organized in a strict order and you don't have to go for every single one of them. The list is meant to be a raw guideline for Hunter's Weapon progression.

Note2: There are a lot more Ranged Weapons than those described. We have mentioned just the easy-to-get and quite essential upgrades. BoE Wands were excluded from the list, as there is a lot of RNG involved in getting them.

Your rotation will greatly depend on your level and will get gradually more complex as you progress through content and get access to more tools.

Tips and Tricks for Hunter leveling