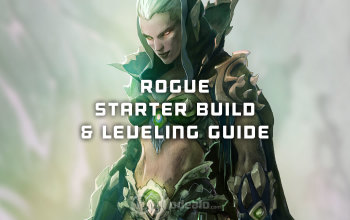 Rogues tend to shy away from head-on encounters and prefer to rely on their Deception, Assassination, and Subtlety skills instead. They are one of two Classes that have access to the Stealth mechanic, the other being, of course, Druids. Stealth allows Rogues to move undetected and engage unsuspecting Targets with deadly opening moves, which makes them very appealing for many Players. It also lets them sneak past packs of mobs and complete many, otherwise very difficult and time-consuming, Quests easily. In Open World PvP, Stealth puts Rogues at a very advantageous spot if they are the aggressor as it lets them dictate the rules of engagement. However, if they are the ones who get jumped on, they can be overwhelmed very quickly, because of their low Armor and Health values, and the lack of self-healing abilities, unless of course, they are experienced enough to employ their incredible Crowd Control and Survivability toolkits quickly. Abilities like Vanish, Blind, Gouge, and Kidney Shot make experienced Rogues very dangerous in 1v1 situations, even if they get attacked by surprise, as these abilities let them reset and re-engage on their own terms, and control the ensuing encounter with deadly precision. As a matter of fact, Rogues can CC their PvP Target for over 30 seconds without a problem, with a combination of Sap, Blind, Cheap Shot, Kidney Shot, and Gouge abilities.

Despite the advantages provided by Stealth mechanic and great CC capabilities, Rogues struggle a bit during leveling. This is caused by the inability to mitigate incoming Damage efficiently, the lack of Healing abilities, and low overall mobility. A lot of time that has to be invested into leveling a Rogue is spent for eating to regain Health or simply for traveling between locations. Moreover, while their Single Target DPS is very respectable throughout all Level ranges, they have close to zero AoE capabilities, which makes them struggle in 1vX PvE fights most of the time.

These shortcomings keep Rogues in line during their solo leveling journey but do not affect the End-Game that much. In fact, Rogues are the best pure DPS PvE Class in the game and are able to humiliate enemies in PvP when piloted with a certain dose of finesse and experience. If you are looking for a Class that is satisfying to play, engaging, challenging, and very hard to master in PvP, pick a Rogue.

This guide will aid you and your Rogue on your journey to level 60; it will help you choose a Race, present you with an optimal leveling Talent build, point you towards Dungeons and Quests that award worthwhile Weapons, provide some tips & tricks, and more.

The Best Rogue Races for Both Factions

Each Race has unique traits and abilities, some of which greatly benefit a Rogue, other - not so much. More competitive Players might even want to choose their Faction based on Racial traits of one of its member Races. We will take a closer look at all Races that can choose the path of a Rogue and determine which are the best for PvP and PvE.

Rogue is a very Weapon-Dependant Class, as the Damage dealt by almost every single one of his abilities is affected by his Weapon (with a notable exception of the Eviscerate which deals flat Damage that depends on its Rank exclusively). Because of the way that Rogue's ability Damage is calculated (% Weapon Damage + X, and so on), the slower the  Main Hand Weapon, the better. Off-Hand Weapon, on the other hand, should be fast to maximize the rate at which Poisons are applied to a Target, but this is much less important than a slow Main Hand Weapon (during leveling, at least).

As you have concluded from the previous paragraph and the Talents section, you should use Dual Wield. This is because its drawbacks are easily outweighed by benefits that come from Poisons and Talents. Also, lowered chance to Hit does not affect Energy Regeneration in any way, so Rogue does not lose any resources while using two Weapons, unlike Warrior that generates Rage by dealing damage with his Attacks.

It goes without saying that you should aim to upgrade your Weapons as often as possible because they will speed up your leveling process and make experience grinds much more bearable (at least for the next few levels after getting an upgrade). Below, we present you a shortlist of Weapons that you should try and get during your leveling journey.

Note1: Listed Weapons are not organized in a strict order and you don't have to go for every single one of them. The list is meant to be a raw guideline for Rogue's Weapon progression.

Note2: There are a lot more weapons than those described. We have mentioned just the easy-to-get and quite essential upgrades. BoE items were excluded from the list, as there is a lot of RNG involved in getting them.

Your rotation will greatly depend on your level and will get gradually more complex as you progress through content and get access to more tools. While Rogue's basic rotation remains very simple throughout the whole leveling journey, the abilities that he gets on the way allow him to react and adapt to a wide range of PvE and PvP situations.

Tips and Tricks for Rogue leveling