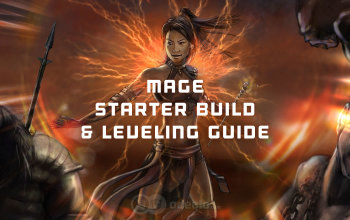 Mages utilize a wide range of very powerful Frost, Fire, and Arcane Spells in combat and their utility kit is more than impressive. These spellcasters specialize in Crowd Control, AoE Damage dealing and Bursting down their enemies with powerful ability combinations. They can also conjure Food and Drinks, which saves them some valuable Gold in the long run but also turns them into Vending Machines in Raids (Just imagine 39 People asking you for some free Food and Drinks...).

A mage can pull and kite multiple mobs at a time for a very long time (as long as he has mana pretty much) and finish them off very efficiently with his potent AoE Spells. This ability makes him the best Class for mass mob grinding in both Open World and Dungeons. However, any interference during the Open World kiting or during the mob execution phase, from a hostile Player, will lead to a very swift and premature mage's death.

In PvP, Skilled Mage is a true nightmare for any opponent. The best Frost Mages can make even the most experienced PvPers look very silly. This coin has the other side as well, however. Mage players who do not have the full knowledge about their Class and are not able to capitalize on their abilities and PvP advantages will get obliterated in seconds.

This guide will aid you and your Mage on your journey to level 60; it will help you choose a Race, present you with an optimal leveling Talent build, point you towards Dungeons and Quests that award worthwhile Wands, provide some tips & tricks, and more.

The Best Mage Races for Both Factions

Each Race has unique traits and abilities, some of which greatly benefit a Mage, other - not so much. More competitive Players might even want to choose their Faction based on Racial traits of one of its member Races. We will take a closer look at all Races that can choose the path of a Mage and determine which are the best for PvP and PvE.

Wands are just as important for a Mage as they are important for every other Caster Class that can use them. They enable him to deal consistent Damage, essentially for free, while his mana regenerates in Combat (the 5-second rule and its importance yet again; front-loading your Spells and then finishing a mob with your Wand is a viable tactic at all level ranges and it allows you to preserve your mana and last longer without drinking).

It goes without saying that you should aim to upgrade your Wand as often as possible because it will speed up your leveling process and make experience grinds much more enjoyable (at least for the next few levels after getting an upgrade). Below, we present you a short list of Wands that you should try and get during your leveling journey.

Note1: Listed Wands are not organized in a strict order and you don't have to go for every single one of them. The list is meant to be a raw guideline for Mage's Wand progression.

Note2: There are a lot more Wands than those described. We have mentioned just the easy-to-get and quite essential upgrades. BoE Wands were excluded from the list, as there is a lot of RNG involved in getting them.

Mage's single Target rotation is incredibly simple and it revolves around not letting your Target get close to you. Moreover, it focuses on maximizing in-combat mana regeneration by implementing Wand Attacks. AoE Grinding does not follow any strict rotation and is more of an action and reaction type of deal instead.

Tips and Tricks for Mage leveling